15 Dragon Pearls: Hold and Win was released by one of the best software development companies called Booongo and it has become an extremely famous Asian-themed slot ever since. We have to note that the delightful visuals and improved game mechanics are what make this game stand out among the fellow Asian slots, and there are tremendous opportunities to win huge amounts of money here. Hence, no wonder so many gamblers are interested in this game and engagement is only growing day by day based on the statistics.

So, we have decided to write the 15 Dragon Pearls: Hold and Win review in order to answer every question players ask regarding this slot and explain how you can generate the highest possible winnings here. 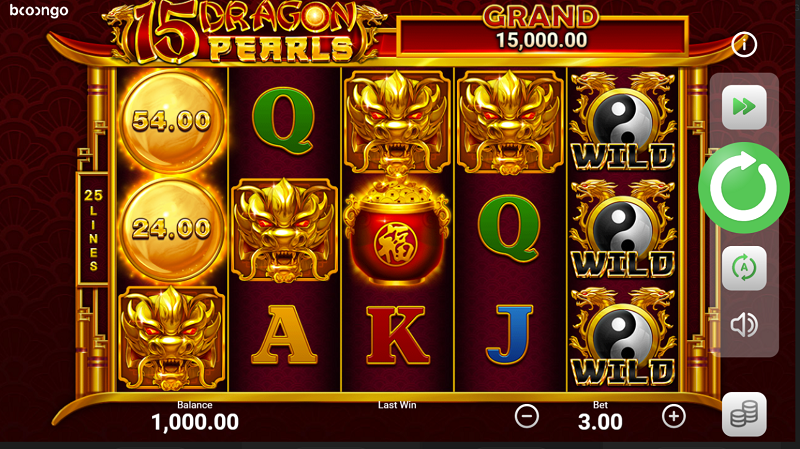 First of all, we want to start by mentioning that 15 Dragon Pearls: Hold and Win features an RTP of 95.71% which is considered slightly above average in the gambling world. This means that the game will return you a considerable amount of funds after wagering and with the help of medium volatility, you are able to earn winnings relatively frequently. However, you should not expect enormous prizes here since the 5×3 playground of this slot includes 25 paylines and the largest amount you can earn is 5.000x your initial stake. Although this does not seem much for the majority of players, it is still a lucrative offer that you have to take advantage of!

As we have already noted, 15 Dragon Pearls: Hold and Win is an Asian-themed slot since you will encounter all the symbols representing Asian culture. The name itself of this game hints that we are dealing with a Chinese-styled game as dragons and pearls are some of the most well-known elements of Chinese customs.

Besides, you will see all kinds of figures mainly colored yellow which once again underlines the Asian lifestyle since yellow is the most frequently used color there and the wild symbol represents a very popular old Chinese concept called Yin-Yang. So, if you are fascinated with Asian traditions then this slot was established for you since you will come across all the elements connected with their culture. 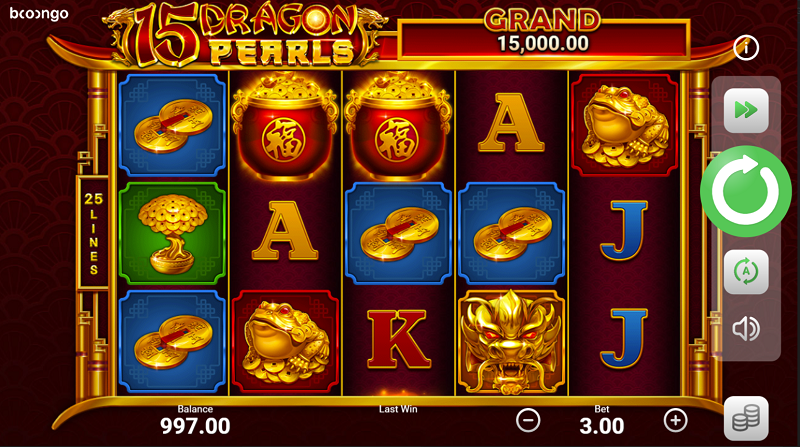 The design of 15 Dragon Pearls: Hold and Win is composed of components related to Asian customs. Although it does not feature a large background, we can still see red-colored ornaments, but the most important figures are presented in the game itself since you will come across all the things representing a Chinese tradition.

We want to point out that you will meet the following symbols in this game – frog, money tree, feng shui coins, and a dragon which is the highest paying icon, but the most iconic figure underlining Chinese culture is a wild which is represented by a well-known symbol called Yin-Yang. Also, apart from the red-colored background, the playground mainly consists of yellow color since it is the most frequently used in Asian culture.

What’s more, the design is created in a straightforward way which means that all the essential information is provided on the screen and you will not have any difficulty playing it. The developers have established 15 Dragon Pearls: Hold and Win mobile version as well that is as exciting as the real one and it contains the same high-class visuals, allowing you to get tremendous enjoyment.

15 Dragon Pearls: Hold and Win Audio – How Does It Feel?

The audio of 15 Dragon Pearls: Hold and Win is ear-catching for every visitor and it will once again remind you of the Asian lifestyle. The slot features pleasing sound effects that follow the flow of the game excellently and you might have already heard these pieces for instance in Chinese movies or somewhere else containing Asian customs.

Booongo developers know very well that it is significant for every slot game to include an appealing soundtrack in the background. Otherwise, players will get bored listening to annoying sounds and lose interest in the game, so that’s why 15 Dragon Pearls: Hold and Win features nice music that connects with the playing interface flawlessly and engages players in a split second. 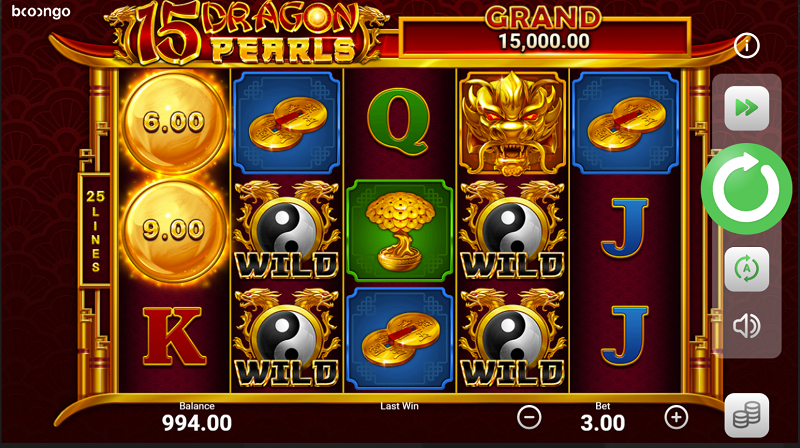 In case you wonder how to play 15 Dragon Pearls: Hold and Win, the following section will inform you regarding the game mechanics. As we have already said, every symbol is promising to award you different payouts with the dragon being the highest one that will generate 10x more money if you catch five of a kind. Also, the wild figure has the ability to replace all the other icons in order to create winning combinations and help you win a lot of money.

You are able to unlock the 15 Dragon Pearls: Hold and Win free spins feature by collecting three scatter symbols anywhere on 2, 3, and 4 reels and they will reward you with 8 free spins. Take into mind that during this feature all the icons are presented on the reels except for standard card figures and if you want to retrigger another 8 free spins you need to catch three more scatter symbols on the second, third, and fourth reels.

15 Dragon Pearls: Hold and Win Bonus Game At a Glance 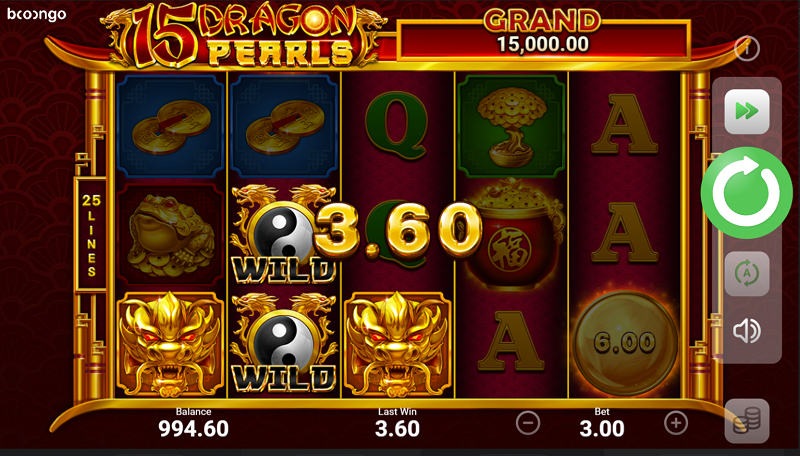 When it comes to the bonus game, we have to note that 15 Dragon Pearls: Hold and Win includes a pretty unique feature. In order to trigger the bonus game, you need to collect at least six orange pearls and during this round, only orange, green, and blue are presented on the reels. Orange pearls contain different values and the number can go up to 20x total bet in some cases, and the most appealing attribute of this bonus game is the possibility to earn a Grand Jackpot worth of 5.000x if you collect all 15 bonus symbols of any type.

Moreover, the bonus starts with 6 respins and there are +1 symbols that will reward you with additional respins, but they will not stick to the board. The bonus game is continued until there are no more respins left or all 15 pearls are collected. In the end, the values of all pearls are added and the bonus win is paid accordingly.

During this round, blue pearls appear randomly and they will gather values from all kinds of pearls, whereas green pearls are responsible for gathering values only from orange pearls. Whereas, when both of them appear, the values of all pearls are summed up.

We have created this 15 Dragon Pearls: Hold and Win guide in order to show you all the characteristics of this Asian-themed slot that was established by the industry’s leading software development company Booongo. Are you fascinated with Chinese culture? If the answer is yes, then this game is definitely for you! You will come across different colored pearls, but mainly yellow ones since it is the most popular color in Chinese tradition. As for the symbols, there is a dragon, frog, coins, and a money tree, whereas the wild symbol represents a well-known Yin-Yang.