9 Dragon Kings is a very popular and brand new slot game from Platipus, which is one of the most prestigious game providers in the gambling industry. The game theme and structure are based on the ancient Chinese myth about the dragon, which is also outlined in the very unique title of the game. For those who want to try diverse bonuses and one of the greatest game graphic visuals, 9 Dragon Kings is the perfect video slot game for them.

The game includes 3 reels and 1 row in total, so it is pretty different from other classic slot machines. Another special feature is that the 9 Dragon Kings has only one payline in total. Firstly it sounds like by playing this game, it is impossible or very difficult to win, but in reality, this is quite a unique and special feature, and the lower chances of winning bring more excitement during the game as a motivator to keep enjoying this wonderful game. 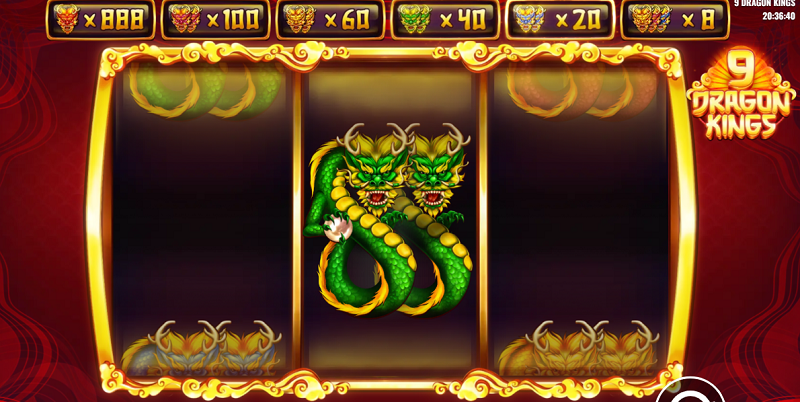 The game is based on Asian mythology so the main theme is also designed with the Asian cultural elements. We can say that the visual elements are pretty busy but on the other hand, it brings more excitement and makes the game board more impressive.

The game offers players different types of bonus features which include bonus symbols that bring spins and multipliers, respins, and symbol swaps. The RTP level is pretty high and equals  95.00%. This ratio is lower compared to the average level which is 96% but still, the RTP is considered a high number because it ensures players the minimal losses. Here we also have to mention the volatility level which is medium and combined with the RTP, creates good winning options for users.

The 9 Dragon Kings does not have any jackpot offers but the amounts of payouts are pretty high. If we consider the limits and minimum amounts of deposit with the maximum multiplier, which is x1 776, the player easily and realistically has a great chance to win a pretty high number of rewards.

With the compatibility of the game, any device user can enjoy this wonderful slot game with a tablet, desktop, or mobile device. The slot game is not presented in the separate app but any kind of device users can have access from their browser.

The 9 Dragon Kings demo version allows new players to try this wonderful game without any risks and losses. This availability is great to learn more about the specific features and get an understanding of how to play the 9 Dragon Kings slot game.

Down below, during the 9 Dragon Kings guide, we will clarify several central aspects to outline the game bonus features, the structure of playing, and other important details.

The design of the slot game is unique. It is inspired by ancient Chinese culture and the whole playboard is busy with different Chinese decorations. This creates a luxurious atmosphere during the game and makes slot space kind of royal. The background is mystic and impressive, with dark and deep red ornaments. The board of the reel is with the golden decors which bring an impressive royalty association with the game. Every setting structure and detail is also designed with the golden elements.

The symbols are also designed with high-quality visual elements and are quite amazing. Here the main symbols are different colors of dragons. They appear with different numbers in each row. Here you will find impressive golden, green, blue, orange, and red double dragons. In total, the design creates a unique space with the ancient Chinese luxurious style.

9 Dragon Kings Audio – How Does It Feel?

Because the game is inspired by Chinese culture, the soundtrack of the 9 Dragon Kings is also designed with Chinese traditional music which is quite diverse. It brings different emotions to the player. Sometimes you can hear tensed notes with excitement and motivation but then the audio turns into the harmonical and calm music notes. In total, the music is completely relevant to the 9 Dragon Kings theme and is very impressive because sound relevance is very important in creating a comfortable gaming atmosphere.

As we mentioned, 9 Dragon Kings’ design theme is pretty impressive and most importantly, unique. The design is based on the ancient Chinese cultural myths about 9 dragons so the main characters are dragons in the game. There are 9 symbols and each of them can bring the player different bonuses. More specifically, five out of nine are the highest paying and most important symbols. Others are also giving the bonuses but they are regular ones. The main principle for winning is to land at least three of the same dragons on the reel.

To outline each symbol’s meanings and offers, let’s start with the blue dragons which give the player a chance to increase the amount of winning x20 stake. The green dragons are paying more – giving you an x40 multiplier. The highest-paying symbols are golden dragons. If a player lands three golden dragons on the payline, the amount of winning will be increased to x60 stake. As we mentioned before, the game includes bonus symbols. Landing this symbol on the reel will bring the player x888 stake, which is a great chance to win a pretty high number of rewards even with low betting.

As we mentioned before, 9 Dragon Kings includes different symbols which include several types of multipliers. The number of rewards and bonus features are depending on the landed symbols on each reel. Let’s start with the main bonus which will be activated after the player will land the three red twin dragons. That brings the player x100 of the stake. The user also can twist and mix different colored dragons. This option gives the player an x8 multiplier of the total bet.

9 Dragon Kings also includes a bonus symbol. As we have said, the maximum payout for this slot game gives the user x888 of the bet. 9 Dragon Kings’ free spin feature is another great bonus option for the users which can be activated after matching three bonus symbols. So, 9 Dragon Kings bonuses are pretty realistically increasing the probability of winning the maximum amount of reward.

9 Dragon Kings is a perfect and unique game with high-quality visual graphic elements, a soundtrack, and most importantly, generous bonus features. It is not busy and diverse as some slot machines but still, this is a great and impressive experience for everyone, no matter whether the player is experienced or not. For new users, this is a perfect game to try simple and bonus-featured games where winning some amount of reward is pretty simple.

All in all, with the great level of RTP and acceptable level of volatility, 9 Dragon Kings is definitely worth your time and money.