Aztec Spell – Forgotten Empire was launched by one of the best software providers Spinomenal and it has gained enormous engagement from gamblers ever since. This company is known for creating a lot of Aztec-themed slots and this one certainly stands out among the rest with its unique characteristics and increased chances of winning a lot of money.

This is a perfect destination for everyone who wants to go on an adventure to ancient times and observe the Aztec world. It is a well-known fact from history that this civilization was famous for its treasures and riches, so it is quite symbolic that in this slot you will try to explore them and win huge prizes. So, if you are enthusiastic about Aztec culture, you are guaranteed tons of fun here, and we are writing an Aztec Spell – Forgotten Empire guide in order to teach you every attribute. 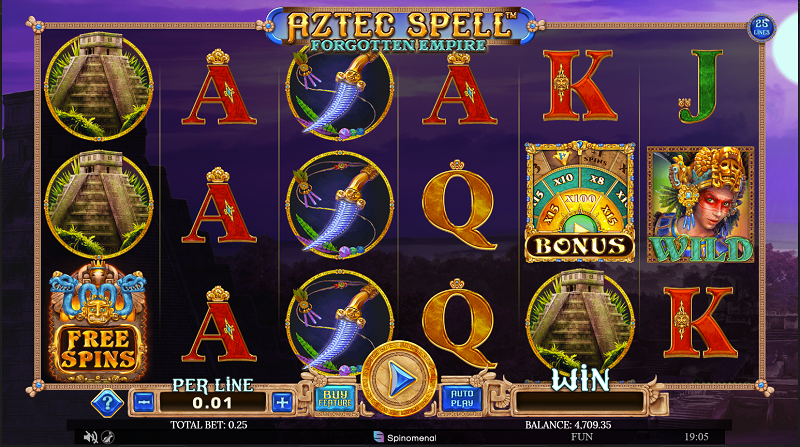 First of all, we want to mention that you will encounter a playing area consisting of 6 reels and 3 rows. On these reels, there are beautifully pictured characters that create a marvelous atmosphere on every spin. A total of 25 paylines will be responsible for creating winning combinations for you as you gamble with as minimum as 0.25 EUR bet. Whereas, the maximum possible bet you can place here is 250 EUR.

When it comes to the RTP, we want to note that Aztec Spell – Forgotten Empire includes 96.31% which is slightly above average and it will return you high amounts after wagering. The highest payout of this slot is 1.000x your stake which you can earn relatively frequently due to medium volatility. So, as long as you gamble here for some time, it will not disappoint you in the end.

This game has offered completely unique opportunities and that’s why there is a great number of gamblers choosing this one. If you are one of them, we would recommend trying out an Aztec Spell – Forgotten Empire demo version first as they are available everywhere on gambling websites. By doing so, you will learn game mechanics in-depth and as a result, you will be better prepared to play with Aztec Spell – Forgotten Empire real money in the near future.

Continue reading to find out every detail about the playing interface and game features of this popular game! 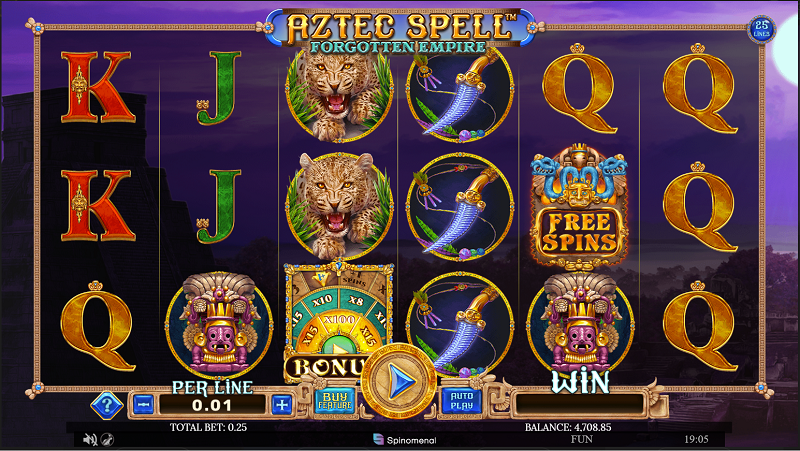 The design of Aztec Spell – Forgotten Empire is something unique and you will notice high-quality graphics from the very first second after arriving. As we have said, this is an Aztec-themed game and you will come across all the components related to their culture and lifestyle.

The first thing you will notice here is that the background and the main playing interface are almost the same sizes. You are able to see what is going on in the back since the playing area is displayed in a transparent way. There is a sight of nature with a lot of trees around and an Aztec-like building on the left side.

The playground features visually appealing characters including a knife, eagle, tiger, an Aztec monument, and a temple. So, they are all connected with Aztec culture since you will come across convenient structures and colors that have a pretty spectacular effect as you spin the reels.

You will find the betting section at the bottom where it usually is in the majority of slots. Here, you are able to choose your desired amount of bet and start playing by pushing a big circle button with a blue arrow in it. Every necessary button is available in this area, so you will not have any difficulty of gambling.

Furthermore, the creators at Spinomenal have ensured a suitable playing interface for smartphone users as well by establishing an Aztec Spell – Forgotten Empire mobile version. Here, you will enjoy every feature the same way as in the original one! So, as you can see, players are able to gamble in this game comfortably using any type of device!

Aztec Spell – Forgotten Empire Audio – How Does It Feel?

Aztec Spell – Forgotten Empire includes a pretty appealing soundtrack in the background that is connected to the playground excellently. The sound effects might be familiar to most people since they greatly resemble music you hear in the movies about Aztecs and ancient people in general. So, you will enjoy calm and pleasing sound pieces that perfectly follow the game flow, and as a result, you will get an ear-catching experience.

This is an essential aspect for every slot to contain a pleasing soundtrack in order to keep punters engaged in the game for a long time. Otherwise, they will get bored easily and eventually leave the game quickly if the music is not satisfying. Hence, Aztec Spell – Forgotten Empire will give you tremendous vibes while gambling! 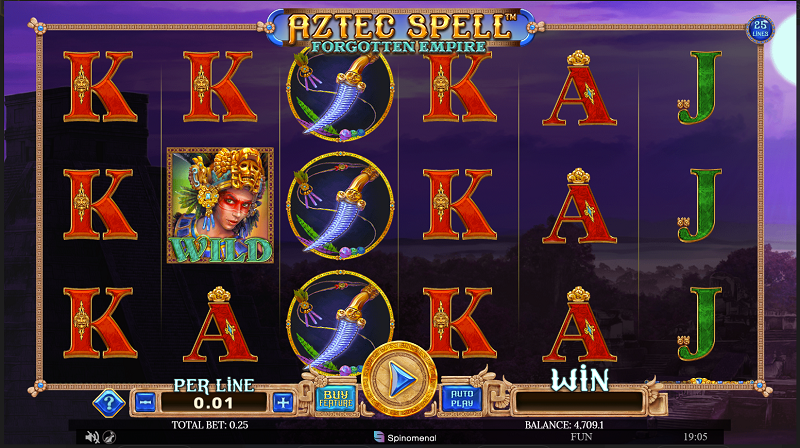 If you want to know how to play Aztec Spell – Forgotten Empire properly, we will be explaining every attribute here. As we have noted, you will encounter several unique features here, but at first, you should know that the highest paying symbol is a temple that will give you 1.000x more money when you land six of a kind on a winning line.

Keep in mind that all symbols pay left to right starting with the leftmost reel and only the highest win on each winning line is paid.

There are wild figures in this slot that have the ability to replace all the other icons except for free spins and bonus ones in order to establish winning combinations. Six of them on a winning line will also award you 1.000x your bet!

The game also includes countdown wilds that will unlock a respin mode. During this feature, these wild figures will remain on the screen until the next re-spin comes and their count will be reduced by one. When there are no more countdown wilds with a count 1 or larger than that in the slot, the re-spin mode will be finished. These wilds can only be collected on the first, third, and fifth reels in the base game, as for the respin mode they will land on every reel.

Moreover, there are also mystery symbols presented in this game that have the ability to uncover and reveal one random icon except for bonuses, wilds, or free spins. This can happen only in the base game. 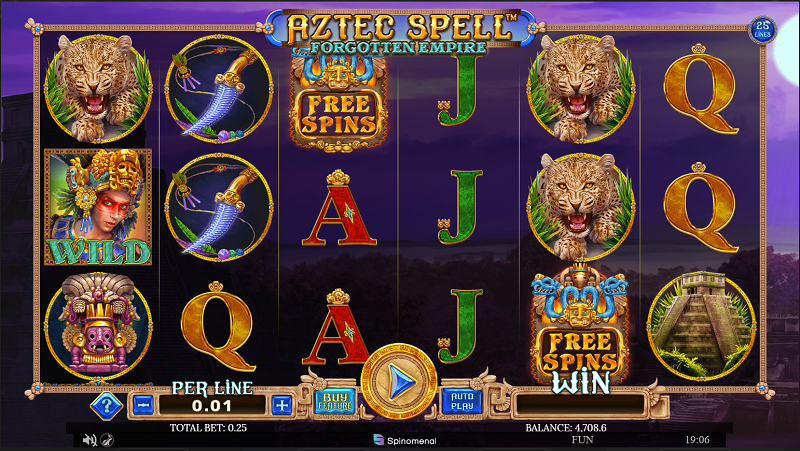 Aztec Spell – Forgotten Empire includes two types of bonus games. The first is the standard one that will award you free spins as soon as you collect at least three scatter figures. When this feature is triggered, the wild icon will expand on one of the reels and it will remain in the position when there are no more Aztec Spell – Forgotten Empire free spins left in the game.

The second one is unlocked when you catch three or more bonus symbols. Here, you will come across a 3-level wheel of fortune and you will have three attempts to spin it. It features different prizes such as extra spins, multipliers, and level up.

In this Aztec Spell – Forgotten Empire review, you have learned every characteristic of a popular Aztec-themed slot that was released by Spinomenal. It allows every player to go on a journey in ancient times and discover Aztec treasures in the process!

Aztec Spell features highly appealing attributes in terms of gaming mechanics. You are able to gamble here with as high as 250 EUR and a total of 25 paylines will form winning combinations for you. In case you get really lucky, one day you might obtain the highest payout here which is 1.000x your initial stake.

The RTP of Aztec Spell is 96.31% which is considered slightly above average in the gambling industry and players have the opportunity to earn considerable prizes after gambling here. Also, the winnings will come relatively frequently due to medium volatility, but don’t expect enormous wins.