Black Wolf Hold And Win is a full-moon-themed slot by Booongo gaming company. The game is available on online crypto casinos for the players who prioritize making transactions using digital coins.

The slot has 5×3 reels with 25 ways to win and some multiple features like special symbols, free spins, and a re-spins bonus round. Players can even access Black Wolf Hold And Win mobile version, as the game is available on desktop and mobile devices with equally high quality. You can play a demo version if you wish to get familiar with the gameplay before betting real money on it.

The slot revolves around a wild, free animal, a lonely black wolf that stands proudly in the golden moonlight on a starry night.

The game can help you earn up to 1328x the initial bet with a medium risk level and an RTP of 95.65%. The slot even includes mini, minor, major, and grand jackpots. The grand jackpot will help you win 1000x the bet.

The Black Wolf Hold And Win slot has a wild lonely animal theme and as you would expect, the visuals have black and blue dominating colors. The reels are set on a hill watching over the dark forest with a dark starry sky above it. 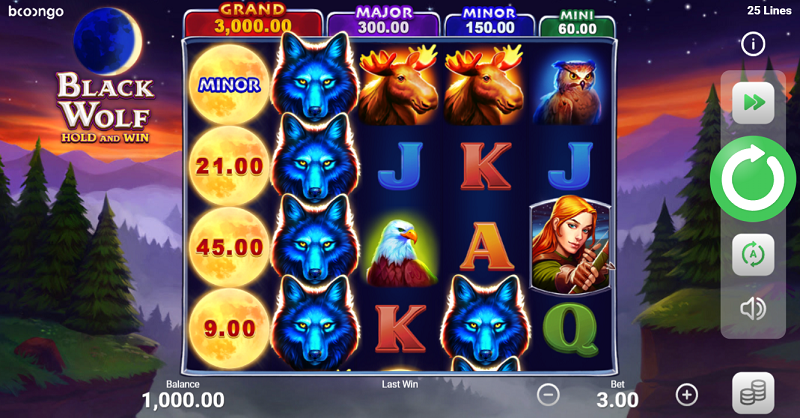 The medium symbols include a cold moon with a golden glow, an eagle with a green glow, an owl with a blue glow, and a reindeer with a red glow. The scatter symbol is a beautiful red-haired hunter with a bow and arrow in green clothing that can trigger the Black Wolf Hold and Win free spins bonus round, and the wild symbol is the black wolf with dark blue details and golden eyes.

The slot contains a golden moon as the bonus symbol that activates a bonus round. That is when the game visuals evolve and you are presented with a proud black wolf standing high on a hill with a big shining full moon behind it. At this point, the reels appear in a starry sky.

The winnings are celebrated by the golden moon symbols combining and shining with a blinding light that takes the form of the sun rather than the moon, or, in the case of landing a pay line, you will be shown a golden line that will go across the winning symbols. 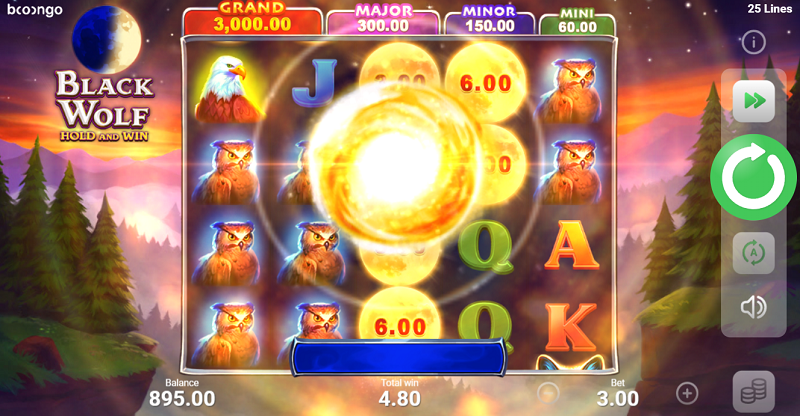 Black Wolf Hold And Win Audio – How Does It Feel?

The background music makes the players feel the adventurous wildlife of the wild wolf. The music sounds like how it feels when you run in a forest freely – something that would remind us of Spirit: Stallion of the Cimarron. This music fits perfectly with the wild Eagle that appears on the reels every now and then.

The whole theme is brought together by the sound effects of the slot that celebrate your winnings with you. By this, the rewards become even more exciting. The sound effect when the bonus round begins is what gives you the feeling of a championship.

Black Wolf Hold And Win gives the players 25 lines to claim winnings, free spins round, a bonus round, and Wild and Scatter symbols. The wild symbol pays the highest with the reindeer symbol that pays the same amount, and one of the two symbols claims 20x the bet.

You can bet up to 60 coins on the game, and a minimum of 0.25. The game includes a Boost feature that is triggered by the Boost symbol with the Bonus symbol. The Boost symbol can appear in any game mode whether it is the main game or the re-spins round.

The Re-spins Bonus game is triggered by 6 Bonus symbols anywhere on the reels and the Bonus game symbols stick to the reels, collecting even more re-spins and different multipliers. 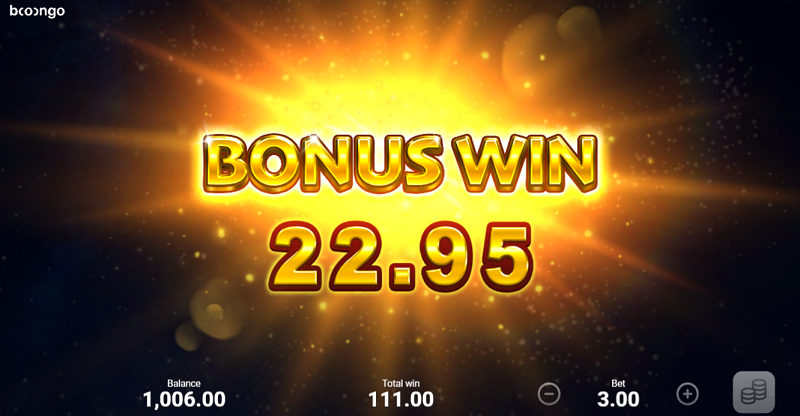 Another interesting element of the slot is the Mystery Symbol that comes in the form of a wolf howling in front of a full moon that can transform into mini, major, or minor jackpots.

The Scatter symbol – the hunter – needs to end up on three of the reels at once to give you the reward of 8 free spins. You can win 8 additional free spins within the free spins round.

Black Wolf Hold And Win Bonus Game At A Glance

If you are wondering how to play the Black Wolf Hold And Win bonus game, it is the game of re-spins that occurs when you hit 6 Bonus symbols on the reels at once. The game starts with a celebratory sound, you will see an illustration of a wolf in front of a full moon before the reels are transformed to the starry sky where the only symbols that land on the reels are the bonus and the mystery symbols.

The bonus game is the only time when the Mystery Symbols appear on the reels and they reveal the mini, minor, and major jackpots – and pay accordingly, the reveal happens at the end of the bonus game. In case of filling all of the reels with Bonus symbols, you will be awarded the grand jackpot that pays 1000x the initial bet. 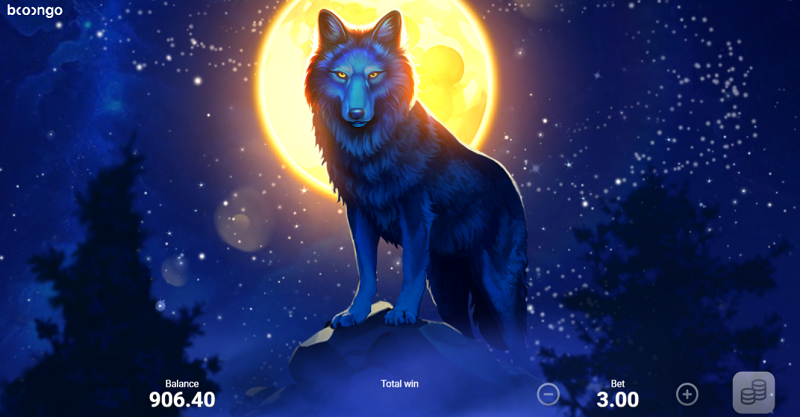 The slot is full of big and exciting rewards and bonuses that will surely make the players feel appreciated. 8 free spins, a re-spins round that keeps rewarding you with multipliers and additional respins, 4 types of jackpots, a boost symbol, and a high-paying Wild should be enough to capture your attention. The game includes 25 pay lines with a medium risk level and a Return to Player percentage of 95.65%.

Captivating midnight visuals shall not go unnoticed, as the game brings incredibly high quality to the table. A golden shining moon, a black wolf, and other symbols that present the wildlife of the deep forest truly make the players go through an adventurous road. The music and the sound effects bring the whole theme together by helping you celebrate your winnings with upbeat sounds and add thrill to your gaming experience. The illustrations of a beautiful dark starry sky and of the forest deserve praise.

All in all, the slot promises enjoyable gameplay that we appreciate, with high-quality design and marvelous bonuses that the players can have a blast with. Not to mention, the maximum payment of up to 1000x the initial bet with additional bonuses!