Bonanza Billion was established by a well-known software development company called BGaming and has engaged the majority of punters from all over the world ever since. There are a lot of reasons behind such enormous popularity but mainly because of a delightful gaming interface and the opportunity to win huge amounts. Therefore, this slot has earned a pretty reputable name in the gambling world and customer involvement is increasing rapidly. We have created this Bonanza Billion guide in order to inform you about every essential feature of this slot.

For starters, we want to point out that this game includes an RTP of 96% and high volatility. For newbies who are unfamiliar with those terms, it means that you will have the possibility to earn a considerable amount of money but not very often, so it is advisable to wait for your chances. As for the playground, it contains 6 reels, 5 rows, and a cluster paying mechanic.

You will come across various colored symbols such as juicy fruits and gems cascading down on a grid. Fruits include watermelons, plums, cherries, oranges, and lemons, whereas you will find colorful gems represented by diamonds, stars, spheres, and hearts. The diversity in colors will be noticeable as soon as you enter the game and it creates a captivating gaming atmosphere.

If you wish to acquire all the necessary information about this game, our suggestion would be to try the Bonanza Billion demo version first as they are available everywhere on the internet. It will prepare you well to play Bonanza Billion real money in the future. You will learn the characteristics of this slot below. 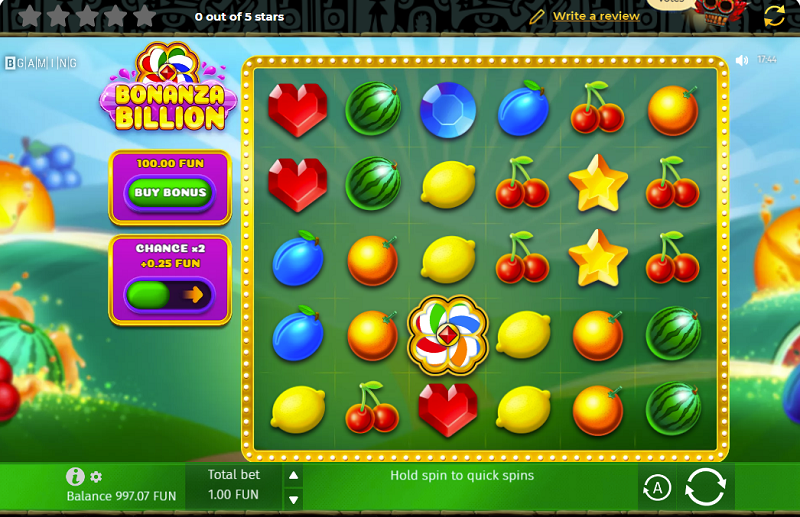 The design of Bonanza Billion is full of diverse colors as we have mentioned above. The background is mostly made of green color and you will encounter different kinds of fruits on both sides of the game such as watermelon, lemon, grape, and so on.

The gaming interface of this slot has been constructed in a way that facilitates the playing process for every gambler. All the essential buttons are presented on the screen and you will not have a hard time gambling in Bonanza Billion. On the left side of the screen, there are two buttons – the first one is a buy bonus feature, whereas the second one allows you to buy the chance x2 feature.

As for the bottom part of the game, you will come across the balance and bet area on the left, and you are able to spin the reels by pressing the circle button made of arrows on the right side of the screen. As you can see, the design is extremely straightforward and you have a chance to enjoy the Bonanza Billion mobile version in the same way as the original one.

Bonanza Billion Audio – How Does It Feel?

Bonanza Billion features a pretty bouncy and bright soundtrack in the background when the game is in progress and you are spinning the reels. It creates a pleasing effect and every player is able to enjoy this slot for a long time with the help of enchanting sounds.

Also, we want to highlight that music changes from being active and bouncy to a relaxing mood when you are not spinning and the game is idle. You will hear a calm piece that will most likely remind you of birdsong. So, you have a chance to sit back and relax for some time with some appealing music in the background when you want to take a small rest from playing.

BGaming developers understand this aspect extremely well that every casino game should include pleasing music in order to create an enjoyable playing atmosphere for punters. It is a significant attribute of a slot game, otherwise, players will get bothered and eventually leave the game. 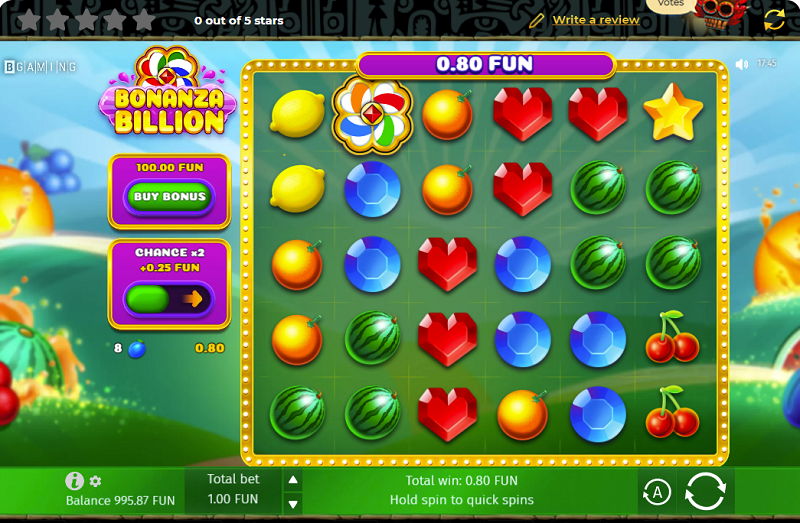 In this section, we are going to provide info about how to play Bonanza Billion. This game contains several beneficial features, but first of all, we want to mention that all the symbols pay different amounts with the green diamond being the highest paying symbol.

Also, this slot consists of a buy bonus feature that gives players the opportunity to buy a bonus game with the price indicated above the button. Needless to say, the price of a bonus game depends on the amount of bet, and it will automatically increase as soon as you place bigger bets. After you push the button, spins will start and the next spin will trigger a bonus game. 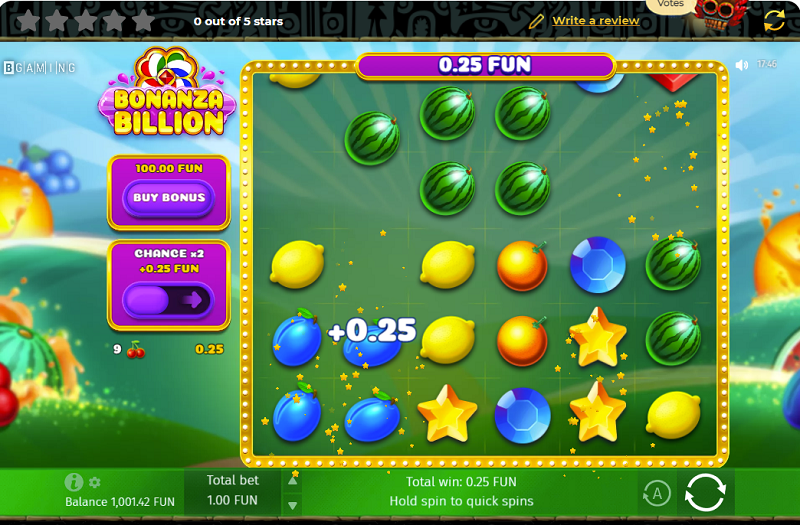 Bonanza Billion includes a pretty unique bonus game that you can trigger by collecting at least four scatter symbols or buying it manually as we have noted above. It is important to mention that more scatter figures mean more free spins, for instance, you will be awarded 10 free spins in case you catch four scatters, 20 free spins for five symbols, and if you collect six scatter symbols then the game will reward you with 30 Bonanza Billion free spins.

The slot consists of a multiplier symbol that only appears in the bonus game. Whenever this figure is presented it will take a random multiplier value in the range of 2x-100x. The value of all multiplier figures is summed at the end of the winning combination and the total win is multiplied by the final value. Also, there is a chance of getting additional 5 free spins in case you catch at least three scatter figures in the free spins round.

We have created this Bonanza Billion review in order to inform you about every characteristic of this famous slot. It is launched by a leading software development provider called BGaming and furnishes punters with high-class services along with a delightful playing interface.

You have a chance to win huge amounts of money due to high RTP and volatility in this slot and gamblers should not miss out on this opportunity!