Book of Piggy Bank – Try Your Luck In This Appealing Game

Book of Piggy Bank has been released by the industry’s leading software development provider called Spinomenal. As you may have already guessed by the name, we are dealing with a money-themed slot here that includes highly appealing features in terms of both visual sides as well as gameplay. Gambling in this game will certainly remind every player of childhood memories since we all had piggy banks at some point in our life when we were trying to collect money.

So, Spinomenal has provided this opportunity for you to accumulate much larger payouts compared to your childhood earnings since the Book of Piggy Bank includes pretty attractive characteristics in terms of gaming mechanics. You will have a chance to experience marvelous graphics and visuals as you spin the reels and all the symbols work together in order to create an eye-catching playing atmosphere here. 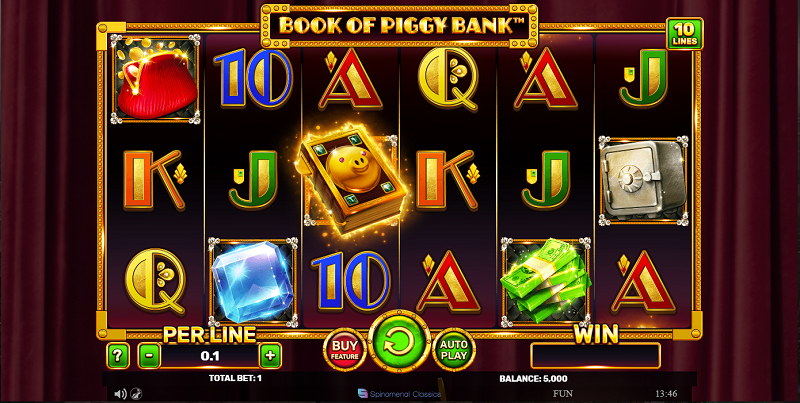 When it comes to gaming attributes, we want to note that you will come across a traditional playing area containing 6 reels and 3 rows, and a total of 10 paylines will form the winning combinations. The minimum possible bet on this slot includes 0.1 EUR and you can go as high as 100 EUR if you wish to gamble with huge stakes. By doing so, you will have a good chance to win the highest payout which is 10.000x of your initial stake!

Book of Piggy Bank features an RTP of 96.47% which is roughly above average in the gambling industry, so you will get back considerable amounts of money on average. Also, with the help of medium volatility, you can generate payouts relatively often here! As you can tell, enormous possibilities are waiting for you in this game which you should certainly take advantage of!

However, before you opt for this slot, we recommend trying a Book of Piggy Bank demo version first in order to get familiar with the gameplay. There are plenty of websites giving you this opportunity, and as a result, you will be able to gamble with Book of Piggy Bank real money in the near future! Continue reading to learn all the crucial aspects of this simple yet amazing slot!

A Better Look At Book of Piggy Bank Design Aspects

When it comes to the design aspects of Book of Piggy Bank, we have to note that you will not encounter something unique. It includes a simple interface with 5 reels and 3 rows like the majority of slots, and all the essential buttons are presented on the screen meaning that no player will have any difficulty playing here.

The background of the game features some kind of light-red curtain. It makes an impression as if a big sum of money is hidden behind that and your main idea is to open this curtain in order to find the money.

As for the symbols, you will come across all the attributes connected with money and piggy banks. They include various colors in order to enhance the overall visual side on every spin and you will see dollars, a bag full of gold, a safe, and a diamond. The most important icon is scatter here which is depicted as a piggy bank in the form of a book! 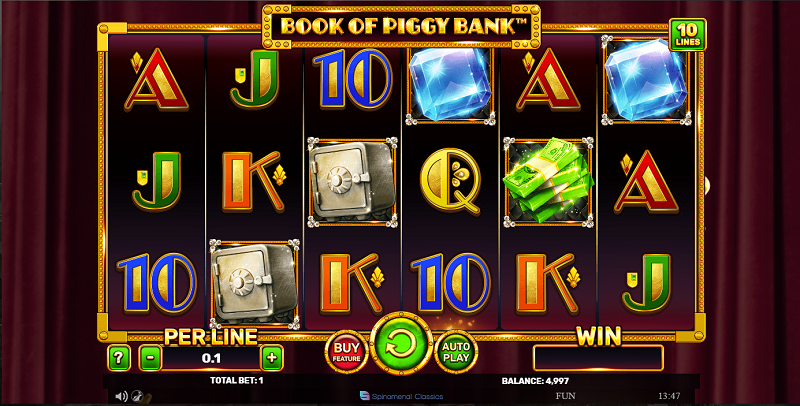 Apart from the main symbols, there are also traditional card icons in this slot – A, K, Q, J, and 10. They also have different looks and the dominant color is yellow here which is a representation of gold. As you can tell, this game is for money lovers since all the elements are related to it! Also, it is worth mentioning that every time you collect a winning combination, gold coins appear on the screen making it obvious that you receive a payout.

Furthermore, the developers at Spinomenal know very well that smartphones are the most frequently utilized devices in today’s world. So, they have established a suitable playing interface for them and you can enjoy a Book of Piggy Bank mobile version since it includes the same high-class features as the original one.

Book of Piggy Bank Audio – How Does It Feel?

The audio of Book of Piggy Bank is as enjoyable as its gaming interface. You will hear pleasing and repetitive sound effects as you spin the reels and they follow the game flow excellently. This is another crucial aspect of every slot game since appealing music makes punters more engaged in the game and creates a fascinating playing atmosphere even when you are gambling for a long time.

So, Spinomenal developers have launched a pleasing soundtrack for Book of Piggy Bank that adds more excitement to the gameplay.

In this part, we are going to teach you how to play the Book of Piggy Bank properly. All the symbols that we have mentioned above include different kinds of payouts and the highest paying icon is dollars that will reward you with a 10.000x payout in case you collect six of them!

As for the other figures, a red-colored gold bag will furnish you with a 4.000x payout if you catch six of a kind, and the diamond and a safe will award you 1.500x more money if you accumulate six of them on a winning line. As for the card icons, they will provide much fewer payouts as usual. 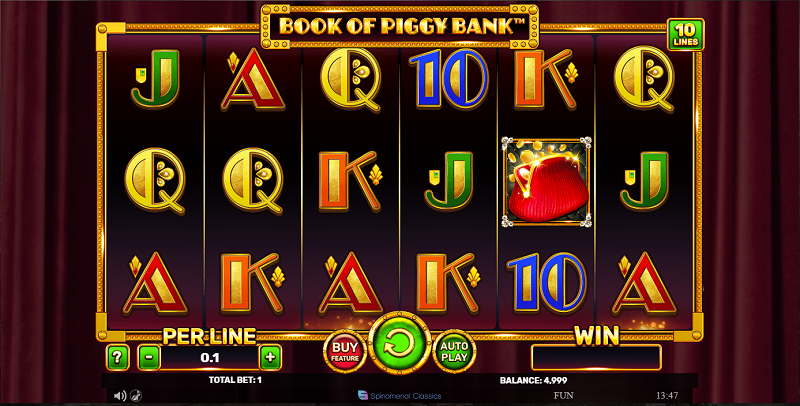 Keep in mind that there are a total of 10 paylines in this game which makes it relatively harder to catch winning combinations. But in case you manage to do so, the main symbols are promising to reward you with generous prizes in the end! What’s more, there is a bonus round in this slot which we will cover down below.

Book of Piggy Bank Bonus Game At A Glance

The bonus game in Book of Piggy Bank can be unlocked by collecting at least three scatter symbols and they will give you 10 free spins in return. The scatter symbols also act as wilds here that will furnish you with a maximum of 500x payout in case you collect six of them. 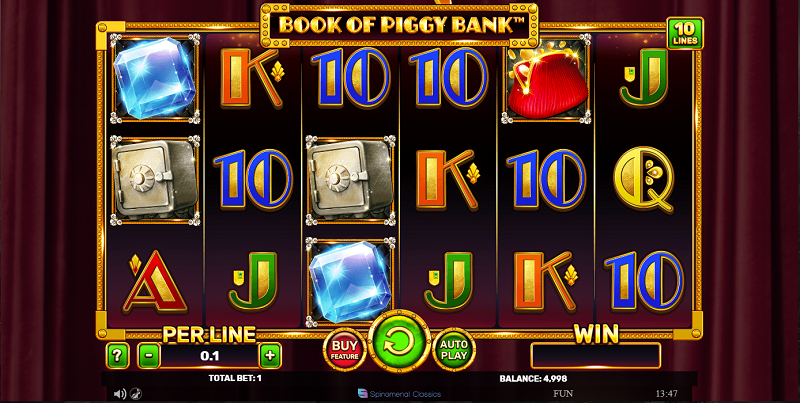 As for the bonus round, you will see some unique features there. For instance, on every spin, a randomly chosen symbol will act as an expanding one for that particular spin only. It will expand in order to form new paylines in addition to the existing ones and it will do so only if the expansion will result in a win! As a result, you will receive payouts accordingly, and remember that expanded symbols count separately from the original slot result.

You have the opportunity to generate the highest payout in this game which is 10.000x your bet in case you collect six-dollar symbols on a winning line! Needless to say, this is a pretty lavish opportunity that no player should miss out on!

In this Book of Piggy Bank guide, we have thoroughly reviewed one of the most popular slots released by the industry’s leading software provider called Spinomenal. As the name says itself, we are dealing with a money-themed game here and you will come across all the symbols connected with money. The main point here is to open a piggy bank and win as high as 10.000x your initial stake!