Book of Truth crypto slot has been released by a well-known software development provider called Truelab. This game bears a strong resemblance to other “book” slots since the game mechanics are pretty much the same for each of them. However, what makes the Book of Truth stand out among its fellow games is a delightful playing interface consisting of Egyptian elements.

Also, there are increased possibilities to win huge prizes in this game and we are seeing some unique symbols as well. The engagement of gamblers has been tremendous ever since its establishment and as a result, more and more people are interested in this slot. Due to this reason, we have decided to create a Book of Truth guide that will furnish you with detailed information regarding all the characteristics. 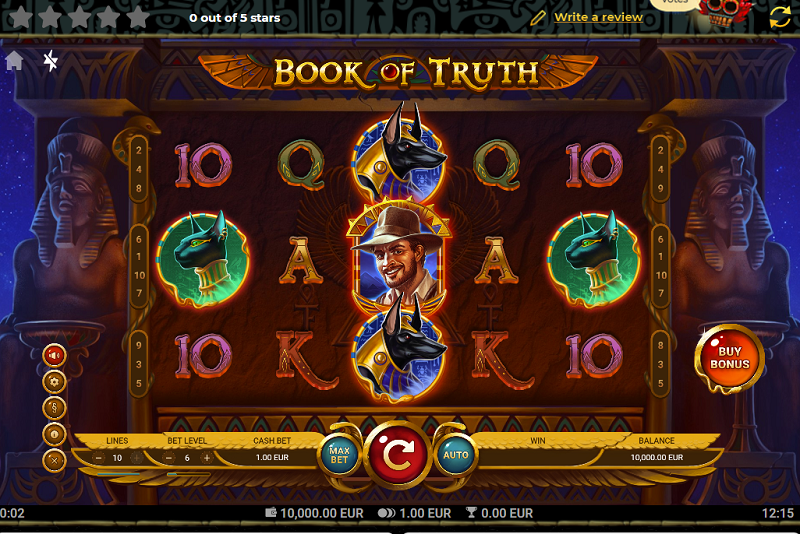 We want to start with the game mechanics. You will come across a classic playground consisting of 5 reels and 3 rows, and 10 paylines will give you winning combinations. The RTP of this slot is 96.33% which is way above the average and it will help you to get back high amounts on average.

Moreover, it features medium volatility meaning that every player is able to generate winnings relatively often, but not very big stakes. However, in case it is your lucky day, you have the possibility to earn the highest payout which is 15.000x your initial bet!

If you wish to try out all these features for free, we recommend playing a Book of Truth demo version first. It will help you to get familiar with the game mechanics and as a result, you will be ready to gamble with Book of Truth real money in the future!

Are you enthusiastic about Egyptian culture? Then this slot is definitely for you! You will encounter all the elements connected with Egypt as soon as you enter the game, and we have to say that high-quality gaming visuals will be noticeable from the first second as well. As for the symbols, there are various animal figures formed in a very creative way and one icon that features a well-dressed man.

Continue reading to find out every detail about this fascinating slot that has engaged a vast number of gamblers from all over the world ever since its creation!

A Better Look At a Book of Truth Design Aspects 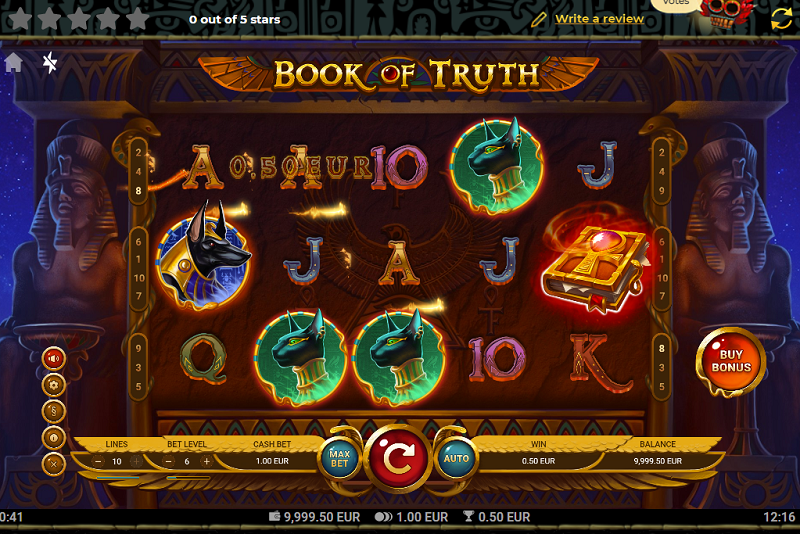 As we have said above, the Book of Truth is composed of Egyptian components that you will notice right away. When you open this slot, you will see old pharaoh sculptures on the right and left sides of the background. They are residing in some kind of a temple that was pretty common in ancient Egypt and also, you will see a sky full of stars behind them.

The overall theme is dark which perfectly applies to the elements mentioned above and it makes every visitor feel like they are in a mysterious place where exciting adventures are waiting for them! So, if you are fascinated with Egyptian customs, then the Book of Truth is promising to give you enormous enjoyment upon arrival.

As for the playground, you will run into unique symbols constructed with various colors. There are three different animals and one man working together to give you winning combinations. We have to note that, being established by a top company, this slot includes high-class graphics and visuals that will be eye-catching for every visitor.

What’s more, the developers have also made a Book of Truth mobile version that contains the same quality of gaming interface and all the essential buttons are presented on the screen in order to facilitate the playing process for every player!

Book of Truth Audio – How Does It Feel?

The audio of Book of Truth feels exactly like the sounds you hear in Egyptian movies and it once again enhances the feeling of being in a wonderful place as you spin the reels. The traditional soundtrack makes a delightful atmosphere and it is in sync with the gaming design flawlessly. Hence, every visitor will have a pleasing time here even when gambling for a long time.

The creators at Truelab understand the importance of developing appealing music very well since it is one of the major factors why people choose certain slots to gamble. They have developed nice sound effects for this Egyptian slot that will have an ear-catching effect on every newcomer! 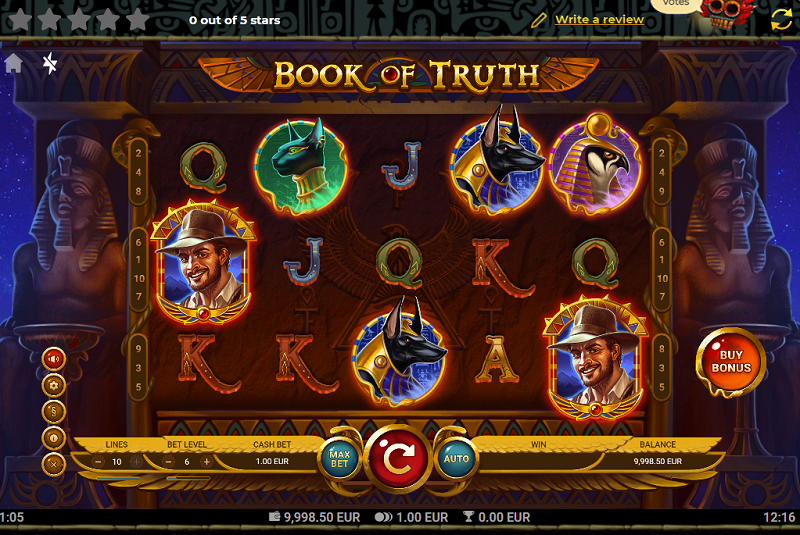 In this part, we would like to teach you how to play Book of Truth. The first thing we want to mention is that a large book icon is the main figure in this game since it acts as both a wild and scatter symbol. It is able to replace all the other icons during free spins except for expanding ones and form winning combinations that will give you a lot of money.

When you collect three book symbols, apart from free spins you will also be rewarded with the payout of 200x your bet. When it acts as a wild figure, it will give you 500x your stake if you catch a five of a kind.

As for the other symbols, they all pay different amounts and the highest icon is a man that will award you a 500x payout as well if you collect five of them. Then comes an eagle consisting of a 200x payout, the third one is a cat with a 75x payout and the final wolf figure will also provide a 75x payout.

Book of Truth Bonus Game At a Glance 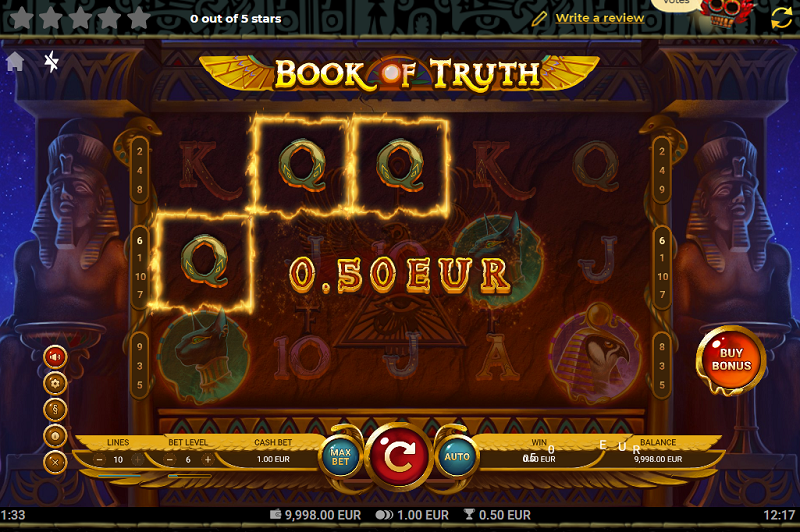 We have to note that when it comes to the bonus game, Book of Truth features a pretty standard round. As mentioned above, the book symbol also acts as a scatter, and you will receive 10 Book of Truth free spins if you collect three or four of them anywhere on the reels.

Before the bonus round starts, a random regular figure will be selected as expanding and it will be able to pay you for each enabled payline regardless of the positions on the reels.

There is also a unique feature called true free spins that are unlocked when you catch 5 scatter icons. This round includes 10 free spins where all regular figures will become expanding and you have a chance to earn the highest payout in this bonus game, which is a 5.000x your bet!

In this Book of Truth review, we have described the attributes of the highly popular slot in-depth. This game was released by a well-known software development company called Truelab, which means that you will encounter high-quality graphics and straightforward game mechanics. Book of Truth was specially created for those punters who love Egyptian culture and all the elements connected to it. Hence, you have the opportunity to dive into an old Egyptian temple with two pharaoh sculptures around and win a substantial amount of money in this slot!