Clover Gold was released by a well-known software development company called Pragmatic Play. This provider is known for its high-quality and engaging games, and this one does not disappoint punters as well. It is an Irish-themed game that features Leprechaun as the main character. So, if you are willing to go on an adventure to the Ireland woods where there are enormous possibilities to win a lot of money, then this slot was certainly launched for you!

We are seeing a massive involvement of punters from all around the world in this game due to its appealing attributes and easy-to-understand game mechanics. As a result, we would like to write a Clover Gold guide where you will read about all the essential characteristics of this famous slot and get ready to gamble here as soon as possible. 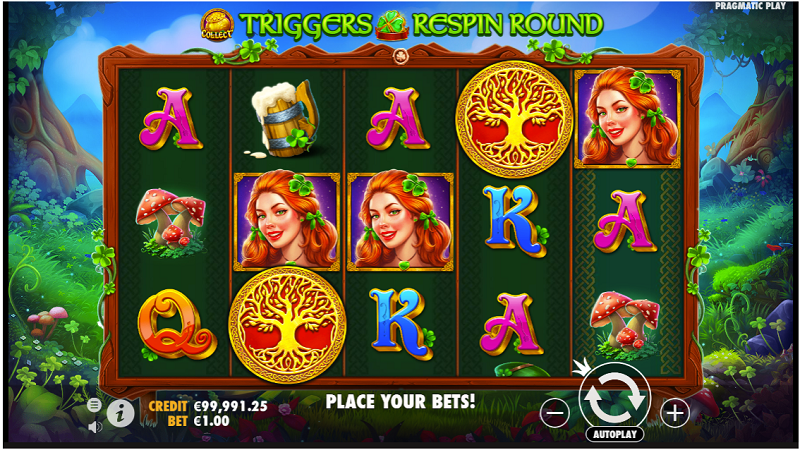 First of all, we want to note that Clover Gold includes highly attractive qualities in terms of gaming mechanics. For instance, the RTP of this game is 96.54% which is considered a high number and it will return you considerable amounts of money on average after wagering. However, you will find medium volatility here which means that you can generate winnings combinations relatively frequently, but don’t expect to win enormous amounts.

On the other hand, this should not discourage you to gamble in this slot since it features 5.000x as the highest payout. So, if you are willing to wait for your chances, then the rewards might be tremendous in the end. You can place a minimum of 0.20 EUR here, and the maximum possible bet includes 100 EUR. The playing arena contains standard elements – 5 reels and 3 rows, whereas 20 paylines will generate winnings combinations!

This simple yet amazing slot provides all the components related to Irish culture and you will be assured of this fact from the very first second after opening the game. So, expect enormous satisfaction and enjoyment here if you are a fan of the Irish lifestyle since every part of this slot including the background and symbols will take you on a journey there.

Furthermore, our suggestion would be to test the gaming mechanics by playing a Clover Gold demo version first. This will help you to better acquire every characteristic of this slot and be prepared to gamble with Clover Gold real money soon! Continue reading to find out all the necessary information regarding this exciting game.

A Better Look At a Clover Gold Design Aspects 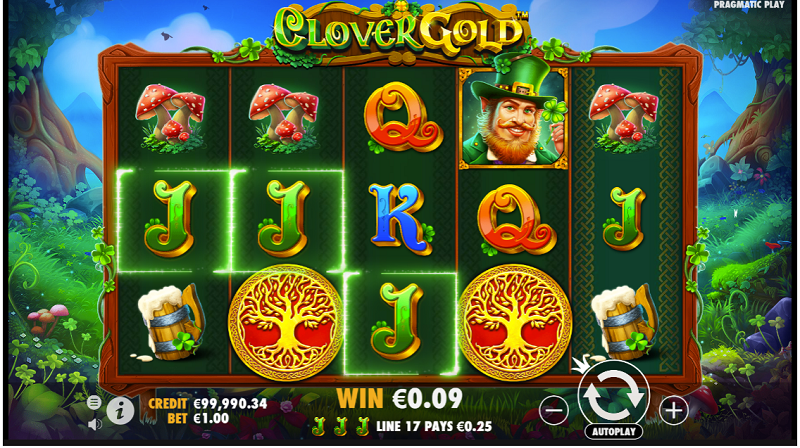 As we have already said, the design of Clover Gold will remind you of Irish culture and customs. You will experience a nice-looking playing interface with various bright colors as soon as you open the game and it will have an eye-catching effect as you spin the reels.

We want to start by describing the background of this slot. You will encounter beautiful sightseeing of nature behind the playing area, where there are trees, grass, different plants, mushrooms, and various kinds of butterflies flying around. So, it is no surprise that the green color dominates Clover Gold since it is the representation of mother nature.

The main playing section consists of every element connected to the Irish lifestyle, as we have noted above. The main character here is Leprechaun himself who is a well-known figure in Irish folklore and it is displayed accurately with a big green hat and a red-colored beard.

The other symbols include a beautiful woman with long red hair as well, beer, and mushrooms. They all are very popular attributes of Irish culture and that’s why the developers have established these icons in order to make you fully experience their traditions.

Hence, you have the possibility to explore a captivating forest with beautiful surroundings as you play this game and enjoy beautiful sightseeing in the process. What’s more, the developers have made sure to make the gambling process effortless for newcomers since you will see that all the necessary buttons are presented on the screen and you are able to start playing by pressing essentially two buttons.

Moreover, Pragmatic Play has established a convenient playing platform for smartphone users as well and in the Clover Gold mobile version, you will experience the same high-quality content as in the real one!

Clover Gold Audio – How Does It Feel?

The audio of Clover Gold feels pretty amazing as you spin the reels. You will hear calm and repeated sound effects in the background that once again enhance the feeling of being somewhere in the forest. There are sounds of birds twittering and leaves rustling accompanied by a nice guitar play. So, it is pretty much impossible to get bored while gambling in this slot.

The creators at Pragmatic Play know how important it is to include a nice and ear-catching soundtrack for every slot game. Otherwise, players will be bothered, and eventually, they will lose interest in the game very quickly. So, they have provided enchanting sound effects for Clover Gold that will make your gambling time memorable here! 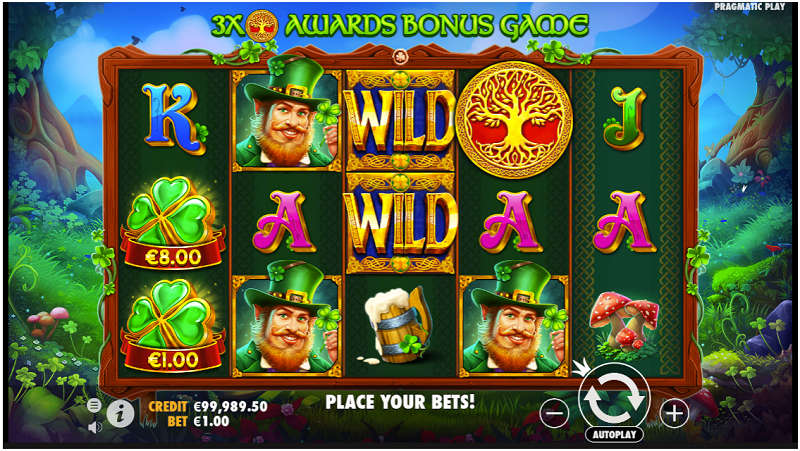 We would like to teach you how to play Clover Gold in this section. The symbols that we have mentioned above are responsible for awarding you different amounts of payouts and the highest one is Leprechaun himself which will give you 12.5x your bet in case you catch five of a kind.

Apart from standard symbols, there are also different bonuses and wild icons. The wild one is able to substitute all the other figures except for bonus, money symbol, and collect in order to form the winning combinations. As for the bonus symbol, it appears only on the second, third, and fourth reels, and if you collect three of them they will award you 1x total bet and 8 free spins.

The money figure can land on any reel except for the fifth one and it takes a random value from the predefined set on each spin. There are a total of five collect symbols in this slot that only appear on the fifth reel and in case they are landed with a money figure you will receive various kinds of awards.

The collect icons are called – collect, extra collect, multiplier collect, expanding collect, and re-spin collect. Each one includes its own awards if they are landed with one or more money symbols. So, it will be good to keep an eye on them in order to generate high winnings in this slot! 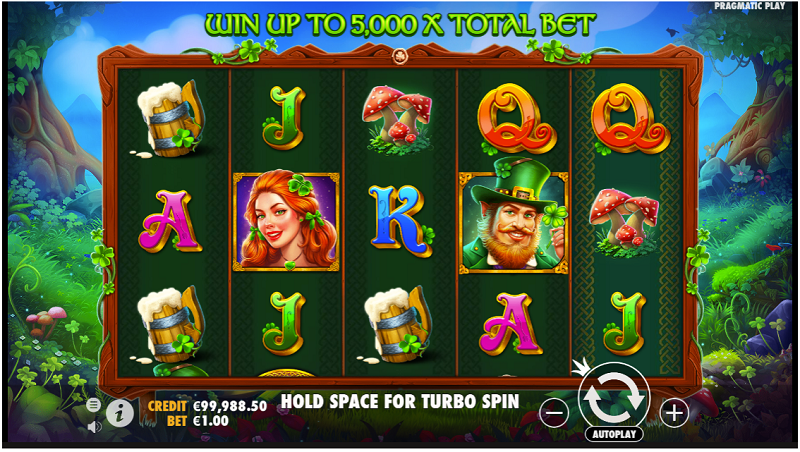 You have the opportunity to unlock the bonus game of Clover Gold by collecting at least three bonus symbols on the second, third, and fourth reels and as a result, you will be rewarded with 8 Clover Gold free spins.

During the free spins round, money symbols and all collect icons are active and it also includes a progressive feature, where all the collect symbols of any type that hit during the round are collected in a trail.

Every fourth collect figure added to the trail will retrigger the feature and award you additional 8 free spins and the multiplier for money symbols collections increases to x2 for the first retrigger, x3 for the second retrigger, and x5 for the third one.

Hence, there are good opportunities in this slot and you have a chance to earn the highest payout in the bonus game which is 5.000x your initial stake!

In this Clover Gold review, we have thoroughly explained all the qualities of a popular slot called Clover Gold. This game will allow you to experience Irish culture since every component is related to it and moreover, you have the possibility to generate enormous winnings here!