Demi Gods IV – Thunderstorm is a brand new and already very popular video slot game from the top game provider called Spinomenal. The game was released at the beginning of May 2022 and travels the players into ancient Greece. The main theme is based on Greek mythology and the gaming atmosphere is divine and impressive. With the theme uniqueness, the game is special with the bonus features.

The game itself is oriented to create a great gaming experience for any kind of user. That is why the game offers are mixed with the classic features as well as innovative and special ones.  This makes the Demi Gods IV – Thunderstorm very interesting and attractive even for new users who have less experience in gaming and are a little bit afraid of the risk. The diverse list of bonus features includes bonuses from collecting scatter and wild symbols with different multipliers, free spins, bonus buys feature, additional free spins, synchronized reels, and other multiplier options. 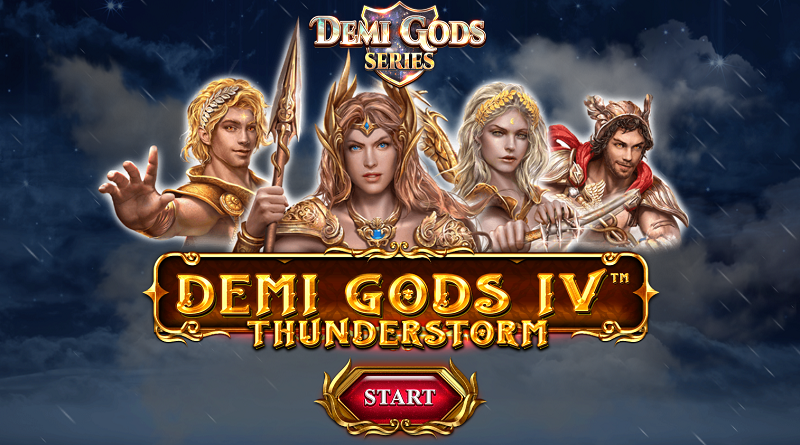 The betting range is pretty low. More specifically the minimum amount is 0.2 USD whereas the maximum limit is 200 USD. The maximum payout that is possible to win is x2 000 of the total stake. So it gives players a pretty great chance to win 400 000 USD. The RTP for the slot machine is 96.30%. The game has a medium volatility level and is a great option for those who do not want to take a high risk.

The game is mobile-friendly which means that Demi Gods IV – Thunderstorm mobile mode as well as desktop and tablet modes are available for any device user.

The title of the game outlines what kind of theme and symbols will be presented during the gaming. This wonderful and high-quality game offers you to travel in ancient Greece with their mythological Demi-Gods. The game design is oriented to create realistic visuals and the team of designers are using 3D symbols to increase the excitement of players. The graphics are creating an impressive and divine gaming space as the mythological characters are. 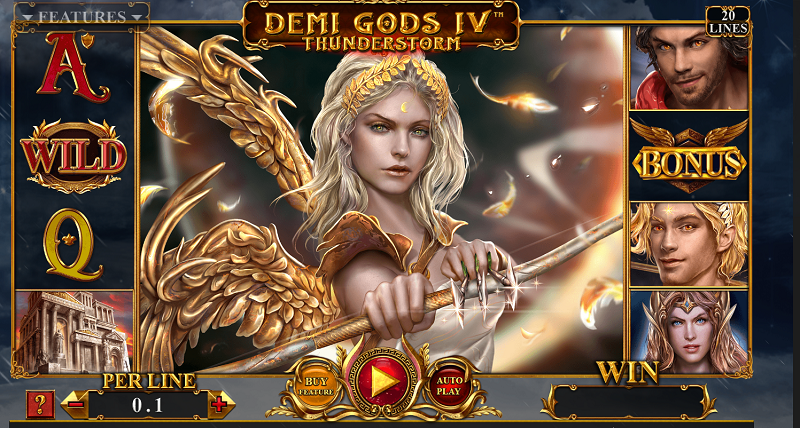 The game background is mystical and very realistic. Behind the board, players can see the rainy dark sky full of clouds and thunder. The playboard is simply designed with minimalistic golden ornaments. The setting’s structure and design are also relevant to the theme and create a very luxurious and calm atmosphere.

When it comes to the slot game symbols, we have different categories. The regular ones such as numbers and letters with golden frames and different colors are low-paying symbols. The special symbols are four different demi-god characters with 3D visuals. All in all, the high-quality graphic elements create a very impressive and realistic space during the playing.

Demi Gods IV – Thunderstorm Audio – How Does It Feel?

Because the main theme is Greek mythology, the slot soundtrack is also full of calm and harmonic Greek music with different instruments. The audio is high-quality and creates a very exciting space for the playing. It perfectly merges with the demi-god characters and brings the best emotional experience to the player. Those who want to play with this amazing soundtrack can easily control the volume from the settings section.

Demi Gods IV – Thunderstorm has 4 rows and 6 reels in total with 20 ways of possible winning. The main principle is to land at least 3 identical symbols on each reel. The highest multipliers are with matching 6 symbols on the reel. The number of multipliers are depending on the symbols’ type. 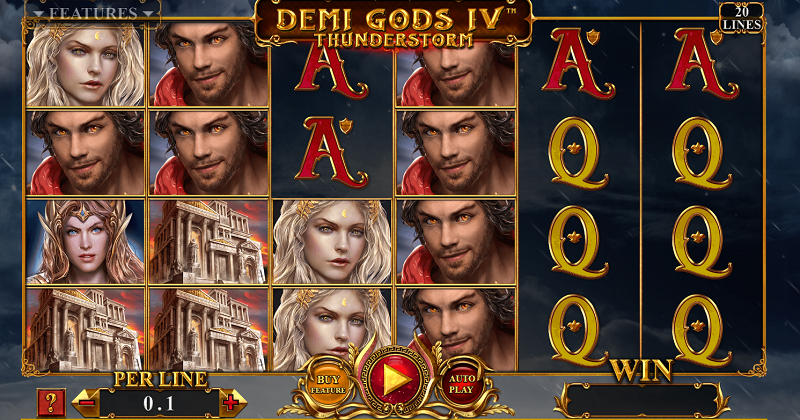 As we have mentioned before, there are regular symbols such as letters and numbers. Landing three of them gives an x0.75 multiplier whereas landing 6 of them earns x15 of the total stake. The medium paying symbols are a redhead and dark hair demi-god characters. If a player lands three of them, he/she will earn x1.25 of the total stake, whereas landing 6 of them means earning an x25 multiplier. The special symbols are the other two demigods with golden hair which gives an x1.5 multiplier when landing 3 of them and x37.5 with landing five of them. The highest paying symbol is a Greek temple. If players land 6 of this symbol, they will earn x50 of the total betting amount.

Demi Gods IV – Thunderstorm is a user-friendly slot game and tries to maximize the chances of winning for every user. That is why the bonus options from that slot game are pretty impressive and diverse. As we already mentioned, the bonus system includes wilds, scatters, multipliers, free spins, bonus rounds, and some others. 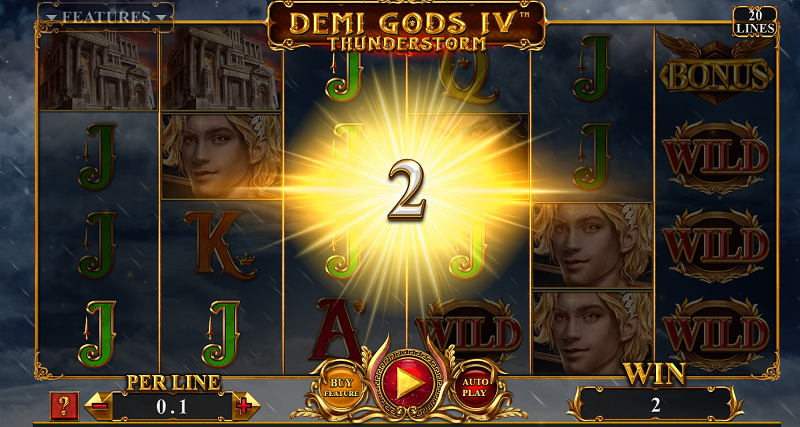 Synchronized reels are perfect for those who want to earn more multipliers during the game. This feature brings the players the multipliers from x2 to x4 of the total amount. It includes three levels where with the 5 matched symbol players can get a huge amount of winning. Demi Gods IV – Thunderstorm-free spins are also available after collecting the wild and scatter symbols. These symbols also give you the chance to increase the total winning amount by x1 000.

If you are looking for a high-quality video slot game with a unique theme and diverse bonus features, Demi Gods IV – Thunderstorm is the perfect game for you. As you saw, the visual and audio effects will travel you in the ancient culture with impressive demi-god characters.

Each character can bring you pretty high multipliers and with the wild and scatter symbols you have a chance to win a huge amount of money. Several types of multipliers, bonus rounds, and free spins increase the chances of winning. So, don’t hesitate to try Demi Gods IV – Thunderstorm which is definitely worth your attention.