BGaming’s Elvis Frog in Vegas slot machine offers a humorous spin on the enduringly iconic Elvis Presley. As you might have already guessed from its name, this is an Elvis-themed slot machine with a frog as the primary character.

Elvis Frog in Vegas is a 5-reel, 3-row video slot with a top payout of 2,500 times your entire bet. With 25 paylines, this game may be enjoyed by high rollers as well as those with smaller bankrolls. Elvis Frog has so many extra features that you will never grow tired of them, including scatters, coin respins, flaming reels, and Bgaming free spins. 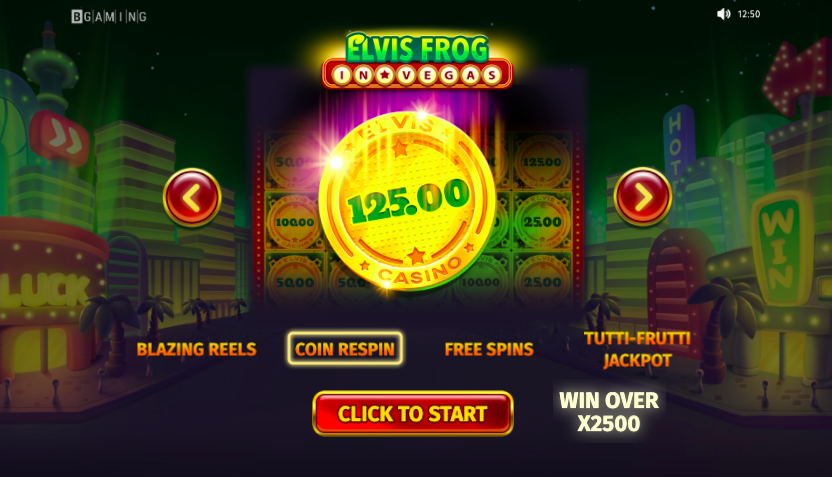 The RTP of Elvis Frog in Vegas is 96 percent, which is standard for online slots. This is based on 100 credits spent in the game, and it’s been thoroughly scrutinized by the slot’s creators. The game’s volatility ranges from modest to high. As a result, you may expect to see wins quite regularly, but you will have to spend more money to get the bigger ones.

Overall, the game looks pretty exciting at the first glance – The gameplay is pretty easy and you can learn how to play from several spins. Additionally, ​​every time that you win big, Elvis Frog jumps in front of the reels and puts on a show for you, which makes the overall experience pretty entertaining and exciting as well.

A Better Look at Elvis Frog in Vegas’ Design Aspects 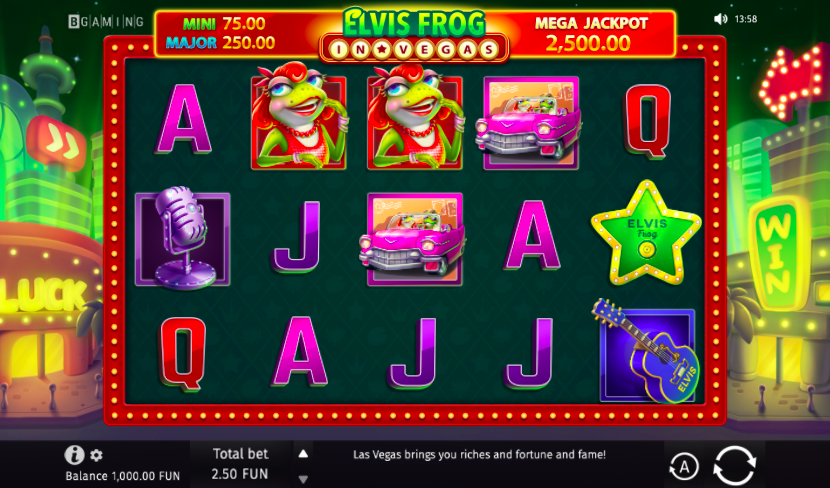 When it comes to online slots, one of the most important things is for them to be high-quality-looking. As the technology develops, software providers have more and more possibilities to make players’ gambling experience interesting rather than boring. We believe that Elvis Frog in Vegas is one of the best-looking slots available on the internet nowadays. 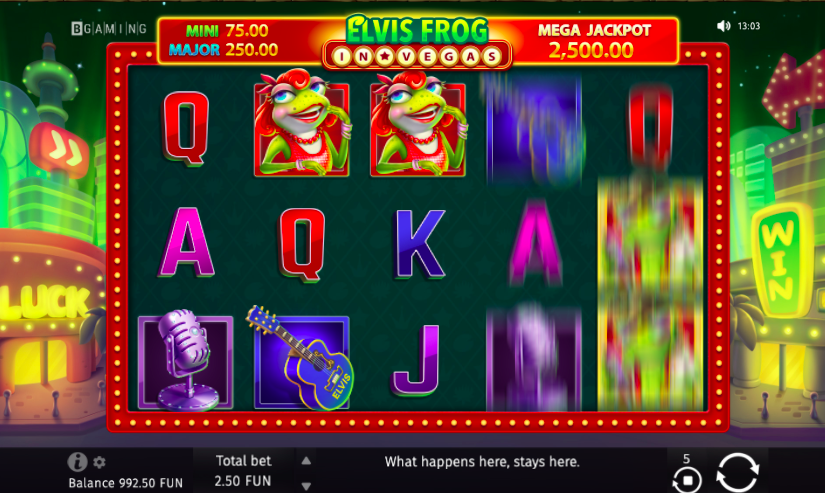 A rather uncommon theme for an online slot can be found in this game. The only other game that comes to mind is the Elvis The King Lives slot machine, except that this one has frogs. All of the animations are in a cartoonish manner, and the only living things you are going to see are frogs. The reels will feature frogs, guitars, microphones, and playing card symbols.

All in all, once you start playing, you will immediately discover that you are playing with a high-quality software provider. Additionally, the game is pretty easy to navigate and you can easily access all the buttons in a simple and comfortable manner.

Elvis Frog in Vegas Audio – How does it feel?

Besides the main theme and design, another important part of this Bgaming slot is its audio. It is particularly interesting in this case because the main theme revolves around an extremely popular musician – Elvis Presley. With the right soundtrack, the software developer can easily keep players entertained during gameplay and let them win more and more.

As the game loads, the famous Vegas glitz and glamour make it clear what the subject of this slot is, particularly the music with its famed Elvis flair.  As everyone would expect, the game’s music includes a rock and roll soundtrack in the background – It definitely keeps players engaged throughout the whole game.

This slot’s rules are basic, making it a great introduction to the world of online slots for those who have never played one before. However, that does not mean that experienced players will not be able to enjoy Elvis Frog in Vegas as well.

It is important to note that Elvis Frog in Vegas’ spins is not very cheap. They start at 2.50 credits for each spin. A long time has passed since we have encountered a slot with such an exorbitant minimum betting limit. The maximum wager for each spin is 25 credits, which isn’t much. Because the betting options are limited, it’s best to stick to a reasonable spending limit if you’re considering playing this game for real money. 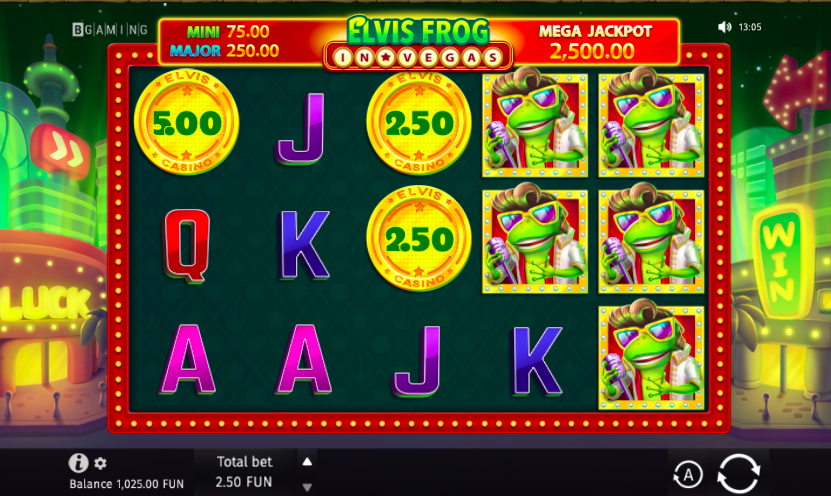 The highest paying symbol of this BGaming slot game is Elvis Frog which also acts as a Wild. If you match five of them somewhere on the reels, you will be able to get 500 coins in total, so it is the best idea to look for them throughout the whole game. The lowest-paying symbol is J which pays the maximum of 50 coins in total.

Elvis Frog in Vegas Bonus Game At A Glance 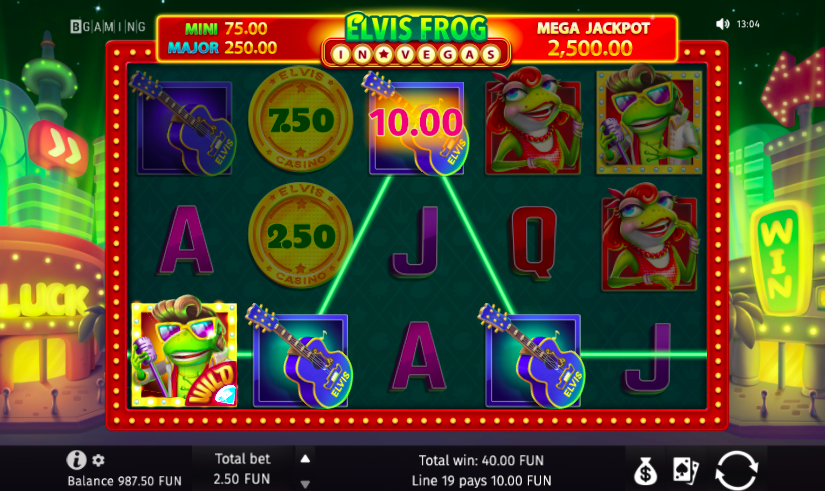 In terms of the game’s extra features, the Elvis Frog In Vegas slot has a few lucrative ones for a fun online reel journey. Bgaming bonus features include Wilds, Scatter, Blazing Reels, Coin Respin, Tutti Frutti Jackpot, and Gamble Feature. Let’s take a closer look at each of them, so you know what you are getting yourself into.

The wild symbol is represented by Elvis the frog. Except for the scatter and coin symbols, he may be used to replace any other icon in the game. Elvis Frog in Vegas’ scatter symbol is a star. Free spins are awarded when the scatter appears on reels 1, 3, and 5. During the free spins round, you may retrigger the free spins by landing three more scatter symbols. There are no restrictions on the number of times you can do this.

The second, third, and fourth reels all combine into one huge symbol during the Blazing Reels round. This increases the player’s odds of earning even larger sums of money. During the free spins round, the unique reel remains in place.

A bonus round is activated if six of the golden coin symbols appear on the reels at the same time during a single spin. With each additional coin, you earn during the bonus game you’ll receive a larger cash award. Additionally, you can win a mini, major, or mega jackpot during the coin respin round. 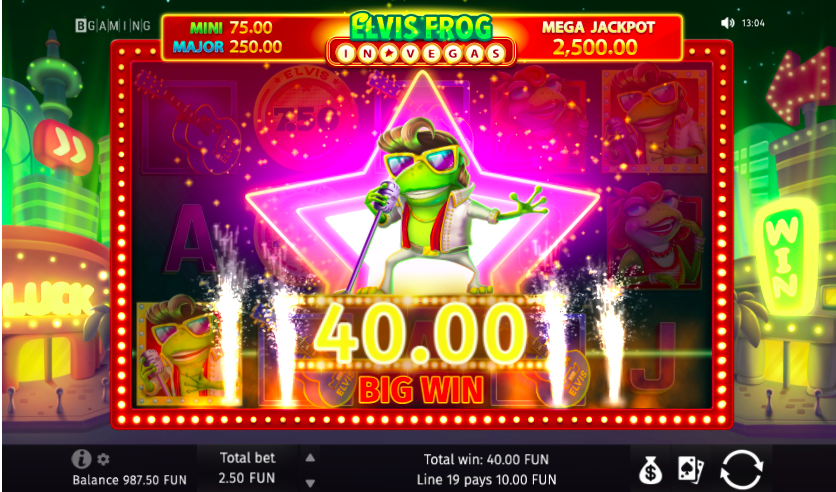 To sum it all up, we believe that Elvis Frog in Vegas is a fantastic game with a fantastic premise and stunning visuals. With so many extra features and a lighthearted theme, you’ll never get tired of playing this slot. The RTP and volatility also look pretty good, so it might be the best idea for you to try this Bgaming slot as soon as possible!