This new and exciting slot called Fire In The Hole xBomb is created by Nolimit City which actually decided to take things to a whole new level. With up to 46,656 ways to win in this online slot, players will have plenty of chances to land a winning combination on every spin. The action begins on a gaming area that comes with six reels and three rows in total. Once you start playing, you will notice that this only represents half of the grid’s total size. Three rows remain inactive, each with one vacant spot. 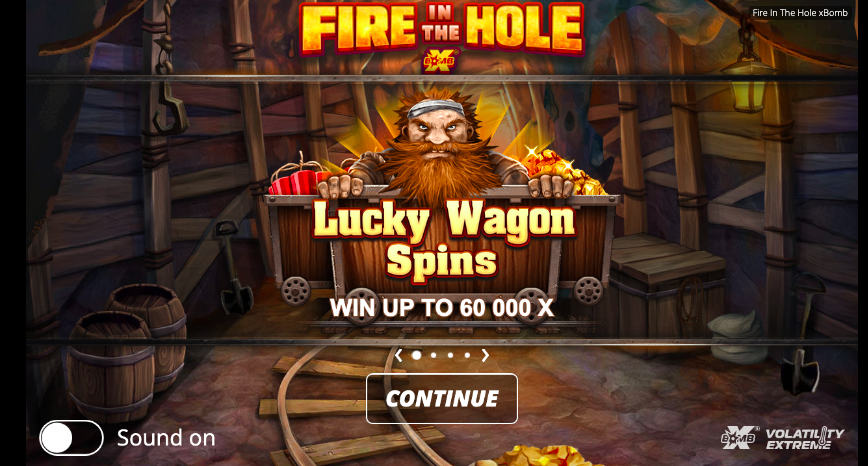 The features of the Nolimit City slot include free spins, expanding reels, expanding wild, and many more. The game also includes bonus rounds which are very exciting and we are going to review them in more detail later. As for the RTP, it comes with a payout percentage of 96.06% – Considering the current state of the gaming industry, it’s a pretty good return on investment.

One of the main things that catch the attention of players is high volatility. These sorts of high-variance, high-paying slots are common in Nolimit City’s latest releases, yet they have enough going on to keep the action from becoming too monotonous.

To keep you entertained during the gameplay, you can expect some additional surprises such as Wild Multiplier, the Lucky Wagon Spins, and the buy feature. All in all, things look pretty exciting at first. Let’s explore more about the slot so you are aware of every little detail that might make you enjoy Fire In The Hole xBomb more.

Nolimit City has always made sure that its engaging games provide gamers with the finest gaming experience possible. This particular game is a mining-themed slot with a mine as a backdrop and a stunning color scheme that elevates the game’s appeal even more. 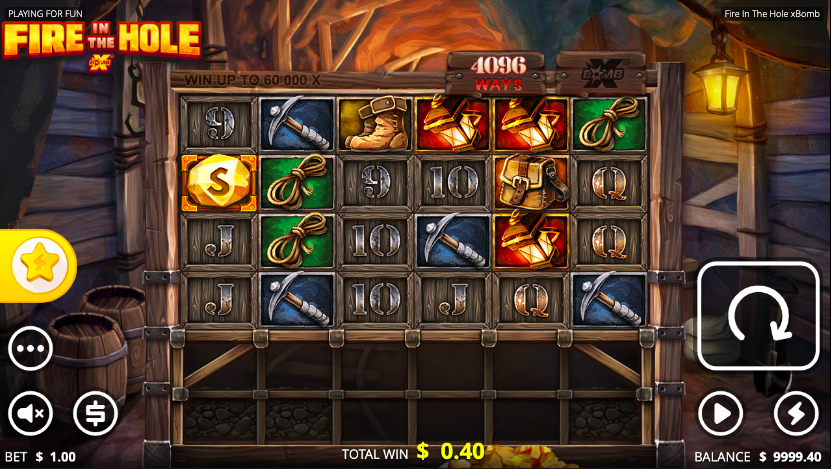 In order to allow players to easily modify the game, it has a command bar at the bottom of the display. As you go through the game, you will also be delighted with the game’s soundtrack. The visuals are excellent, allowing gamers to load and play the game with ease. It is possible to play this game immediately from your web browser, so there is no need to install additional applications on your computer.

All in all, Fire in the Hole looks fantastic, as you would expect from a slot game. The game has a rough look and intriguing music that perfectly complements Fire in the Hole’s atmosphere and provides players with an exceptional gaming experience.

Fire In The Hole xBomb Audio – How does it feel?

While playing any online slot, one of the most important aspects that you might come across is its audio. According to a lot of players, the looks and sounds of a slot machine may enhance your urge to play – and your desire to win more. Seems like Nolimit CIty knows its players well as the soundtrack of the game is very attractive. While the exciting soundtrack delivers a powerful audio experience, it is the regular explosions that will have you bouncing off your seat at some moments. I would say that the graphics and sounds go hand in hand with each other and make the overall gaming experience much more enjoyable and exciting – You can check it out yourself.

Once you start playing Fire in the Hole xBomb, you will interact with many characters, which makes the game interesting and enjoyable to play. The symbols include boots, a bag, an ax, and a rope. These symbols represent the most common ways to win in the slot machine, and their rewards vary based on the icon and the number of times it appears on a payline. For instance, matching six of these symbols provides a maximum payment of 375 coins, while matching three of these symbols awards a minimum payout of up to 17.50 coins. 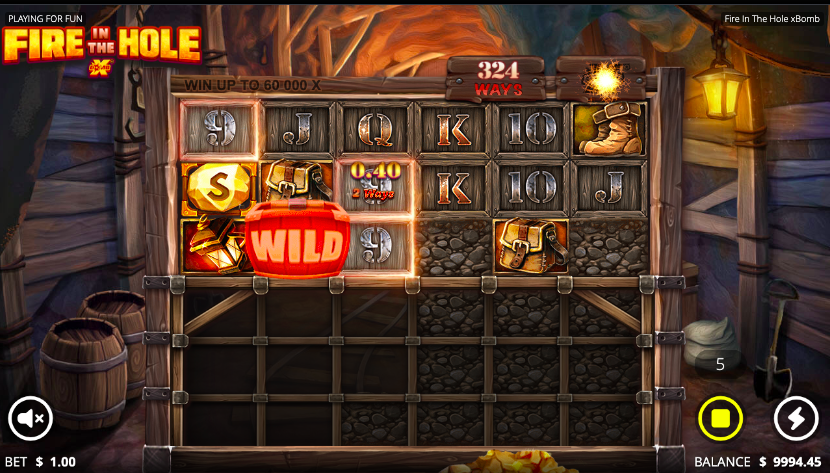 The slot also includes generic card icons K, Q, J, 10, and 9 which make up the second group of symbols. Matching six of these symbols provides a maximum payment of 75 coins while matching three of these symbols awards a minimum payout of up to 10 coins. You must first set your preferred stake using the command bar before you can claim the hidden rewards in this slot machine. 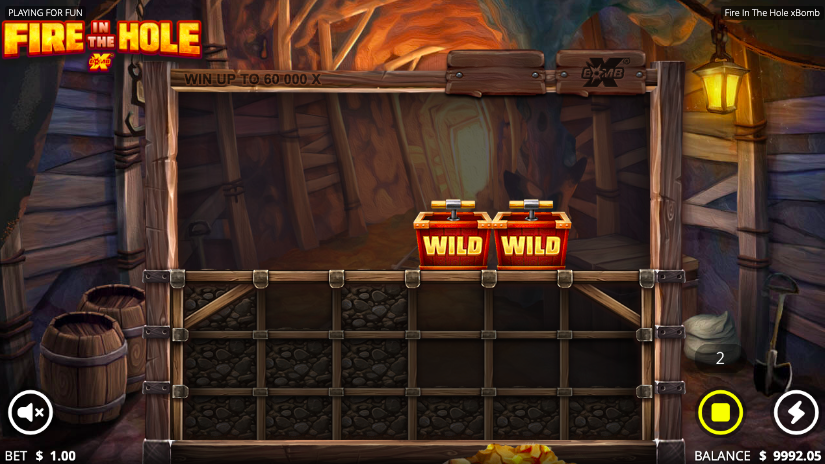 You will also come across additional symbols and all of them have their own distinctive features. For instance, the xBomb is a particular kind of wild symbol. It does more than just assist you land winning combinations, it also eliminates all neighboring symbols and increases your multiplier by one.

Fire In The Hole xBomb Bonus Game At A Glance

There will be a layer of locked rows when the slot first begins. For each row that falls, a new row becomes active until there are a total of 6 active rows. Rows can be cleared by hitting a winning combination, generating a xBomb explosion, or activating a wild mining feature. The lucky wagon spins feature is another bonus. When three, four, or five bonus symbols appear on the screen, the function is activated and the rows are unlocked. 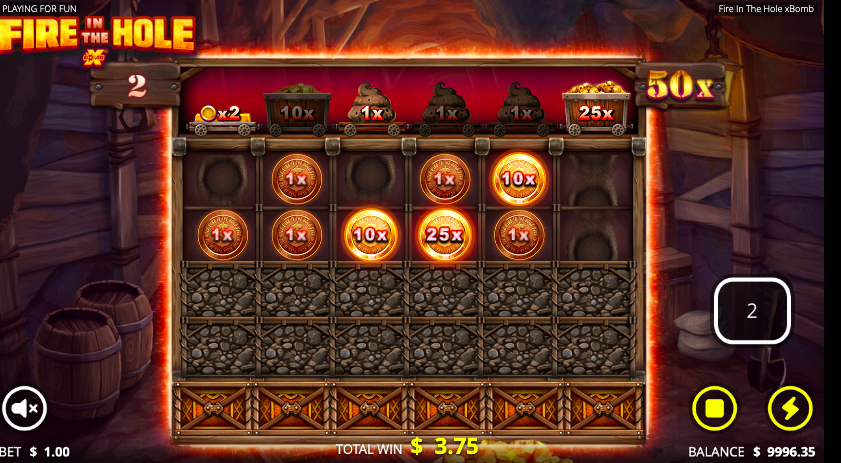 Each time a coin lands on the reels, the number of spins resets to 3. In addition, you’ll get bonuses like a dynamite stick, multipliers, and extra cash to land more wins. The wild mining function is yet another thing you’ll see. When three, four, or five of the same sort of symbols line horizontally in the main game and there is no winning combination, this feature gets activated. The triggering symbols will be eliminated, leaving wild symbols in the center of the alignment. Finally, there’s a beer-counting feature. You’ll be able to earn 60,000 times your initial stake if you are able to trigger it. As a result, the mine will be cleared and the round will come to an end.

Other Fire In The Hole xBomb Unique Features Explored 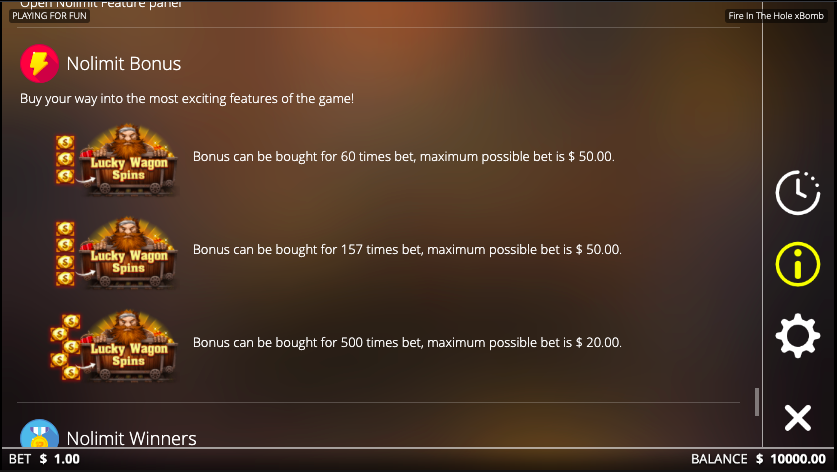 One of the most unique features that Fire In The Hole xBomb comes with is the buy feature. You may purchase the fortunate wagon Free Spins with a 60x, 157x, or 500x wager for 3, 4, or 5 bonus icons. This feature may also be found in the Fire in the Hole xBomb slot demo. Keep in mind that the RTP for this function fluctuates. While the RTP of 3 scatters is 96.07%, the RTP of 5 scatters is 96.66%. The variance, on the other hand, will continue to be quite large. 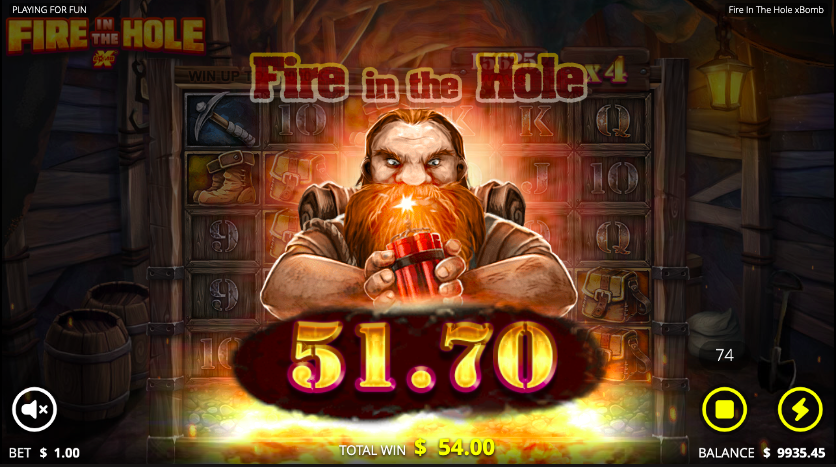 Nolimit City’s Fire in the Hole xBomb demonstrates that this developer will go to any length to ensure that its gamers are completely happy. Despite the usage of a familiar mining theme, its interesting xBomb feature, enhancers, and the big prize of 60,000 times the stake definitely distinguish this mobile-compatible online slot.