Fire Strike 2 is a brand new video slot game from one of the top game providers Pragmatic Play. The slot game was launched in 2019 and despite the short period of release, it soon became one of the most played among the players. That’s because Fire Strike 2 is very special with its graphic designs and visuals and most importantly with features that give every player realistic chances of winning. The game is fully oriented to maximize the satisfaction of the user and that is why it suggests the most impressive visuals, well-structured settings, and a high variety of bonus features with a pretty high amount of payouts.

All this together creates a wonderful gaming experience for every kind of user, no matter the knowledge and experience. So for those who are new to gaming Fire Strike, 2 is a pretty good beginning. Also, Fire Strike 2 demo version gives you the possibility to learn more about the structure and specific features of the game and helps you learn how to play the Fire Strike 2 slot game. 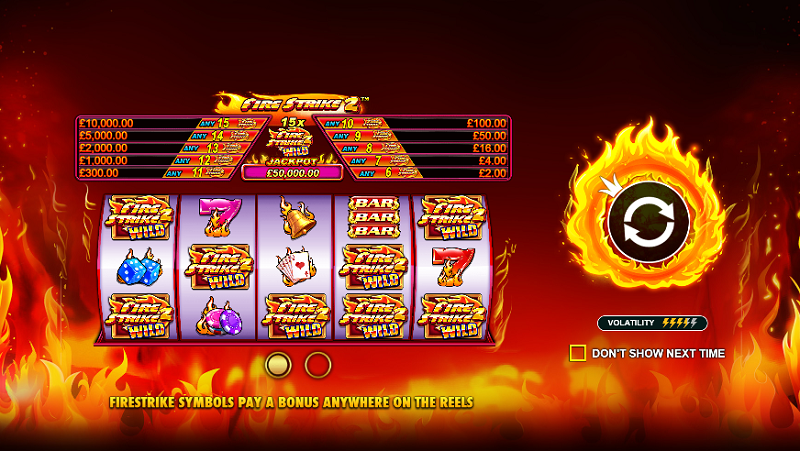 The game itself is a new and improved version of the previous series of slot games called Fire Strike. The main difference is that the newest version comes with more free spin features and extra sticky symbols which also creates more chances of winning. We need to mention that the visual side is also improved and according to the game title, really brings the fire dynamic during the game.

Fire Strike 2 includes 3 rows and 5 reels. The game has 10 main ways of winning. For that type of slot game having 10 paylines is not great but also still outlines real chances of winning. We need to mention the high RTP which is another great pro of the game. It equals 96.50% which is a pretty high level and most importantly, it is over the average level of RTP for slot games. The game has medium volatility.

In Fire Strike 2, there are a total of 11 symbols with different meanings. Each of them has different offers to the players if they collect at least three of them on the same reel.

If you want to learn more about this amazing game, down below during the Fire Strike 2 guide we will outline the key aspects which will illustrate the product in great detail.

The Fire Strike 2 game design illustrates the same vibe and emotions as is included in the slots’ title. If we could describe the graphic theme in one word, we should describe it as fair. The game theme is inspired by the dynamic and the hotness of the fire. Accordingly, the game is mostly in red and orange color tones with many fire symbols. The background is not busy and is mostly dark with the fire effect. The title and other main texts are with the animation and colors of fire and create more heat. When it comes to the playboard, we can see the pretty impressive board with golden graphic elements where 11 different slot game symbols appear.

As we said before, each symbol matching means different bonuses for the player. In the symbol list, you can see letters, numbers as a classic symbol and bell in a fire, money in a fire, diamonds, cards, dice, casino chips, and others. With the letters, there are three types of symbols – ‘Seven’ in colors of red, blue, and purple. 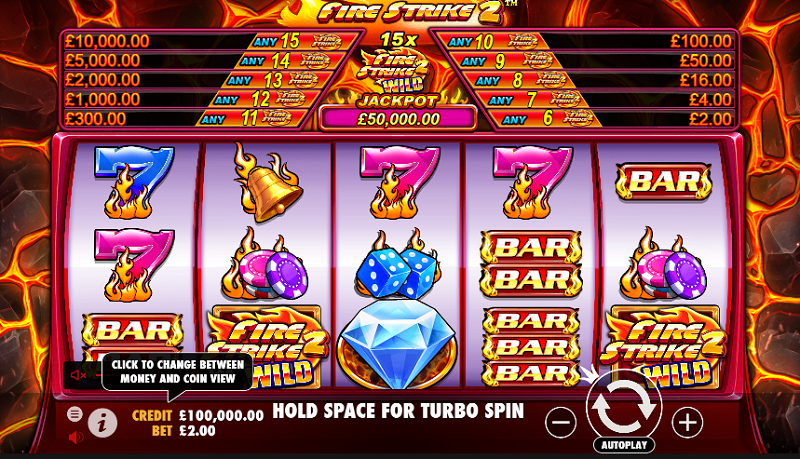 Fire Strike 2 is a well-structured game that brings great emotions and atmosphere to the game with the correct use of graphic design.  Here we have to mention that the Fire Strike 2 mobile version does not lose the high quality of the graphic elements and still creates an impressive and dynamic gaming space for users. So if you are looking for a dynamic and strong gaming space like a fire, Fire Strike 2 is for you!

Fire Strike 2 Audio – How Does It Feel?

Having nice and relevant audio means creating a perfect atmosphere during the game which will be full of dynamics. It gives players the motivation to keep spinning and most importantly, awakes some great emotions. The Fire Strike 2 creator team knows this very well and tries to create the most comfortable and impressive gaming atmosphere for every taste of users.

As we have said before, the graphic elements are fully oriented to create dynamic and powerful fire features. The same is with the audio which is minimalistic but dynamic and has a good rhythm. It brings extra emotions during the game and creates a very exciting atmosphere.

Fire Strike 2 is a 5×3 type slot game with 10 paylines in total. The maximum amount of bet equals 50 USD whereas the minimum is 0.10 USD. The betting amounts are pretty comfortable and tight but the great payouts give the user a chance to win a significant number of rewards.

More specifically in that medium-high volatility slot game the maximum amount of reward is x25 000 of the players’ bet which with the maximum betting amount gives the user a chance to win more than 1 million USD.  The symbols have different amounts of payment. For example, the lowest paying symbols are cards, casino chips, banknotes, bells, and dice. If players collect 5 of them on the same reel, they will get the multiplier from x5 to x12.5 of the bet. There are also medium-paying symbols available such as double BAR, Triple Bar, and single BAR. The player needs to land five of them on the reel to earn the multipliers between x15 to x25 of the stake.

The highest symbols which can increase the amount of winning from x30 to x100 of stake are lucky sevens. If a player collects five of them on the reel, he/she will increase the amount pretty significantly. The colors of lucky seven mean different multipliers. There are available purple, red and blue colors. For activating the wild symbol, Fire Strike 2 uses the logo which gives the player an x200 multiplier, after lending five of them on the reel.

The list of Fire Strike 2 bonuses is quite diverse and includes bonuses from wild and scatter symbols, fire strike bonus, and most importantly many free spins. The Wild symbol acts as a multiplier and increases the amount of winning. The scatter and wild symbol bonuses are depending on which symbol will be matched on the same reel. 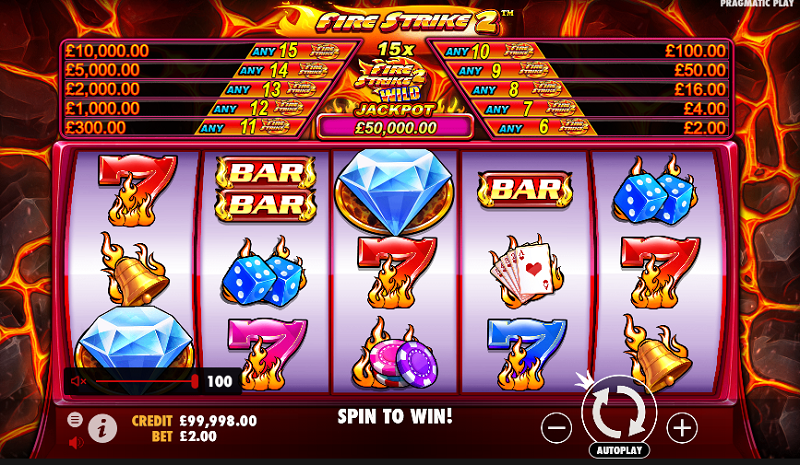 A Firestrike bonus can be earned when a player matches at least 6 wild or normal symbols on the reel. The amount of the winning reward is depending on the number of symbols the player landed. More specifically with 6 firestrike symbols, the player will get an x1 multiplier, with 10 symbols, will get x50 stake, and finally, the highest is with 15 firestrike symbols which give the player x5 000 of the stake. This bonus system includes 10 different multipliers depending on the symbols’ number from 6 to 15.

Fire Strike 2 free spins are also depending on the collecting scatter and firestrike symbols. The bonus system can get you free spins on the first, third, and fifth reel. For activating free spins, the player needs to match at least 3 symbols. The user has a chance to earn 12 free spins with that.

Fire Strike 2 also has a jackpot suggestion with the amount of x25 000 the stake which can be earned after landing 15 firestrike symbols simultaneously. As you can see, Fire Strike 2 bonuses are pretty diverse and special with a high amount of winnings.

Fire Strike 2 is the perfect game for any kind of player because it has diverse opportunities to win and several special features which are very helpful even for new, inexperienced players. The great graphic visuals with the dynamic and quite impressive gaming atmosphere make the gaming journey very exciting and interesting. The game is also a great option for those who want to win the jackpot and try this magical and dynamic experience.