Fortune of Giza – Try Out This Awesome Slot By Pragmatic Play

Fortune of Giza has been launched by one of the best software development providers called Pragmatic Play. This company is famous for its top-class and engaging products, and we have to say that Fortune of Giza does not disappoint gamblers as well. There are a lot of slots consisting of an Egyptian theme and this one certainly stands out among the rest with its innovative features. Take a look at the Fortune of Giza review in order to find out everything about this simple yet fascinating game.

If you have ever wished to go on an adventure to ancient Egypt when pyramids were newly built and the sphinx still had its nose, then you have an excellent possibility to fulfill your dreams here. The developers have constructed this slot by taking into account all the elements that are directly related to ancient Egypt and its customs. The name itself is an indication of the first-ever pyramid that was built in this country, so if you are fascinated with Egyptian culture, you will experience tons of fun in Fortune of Giza. 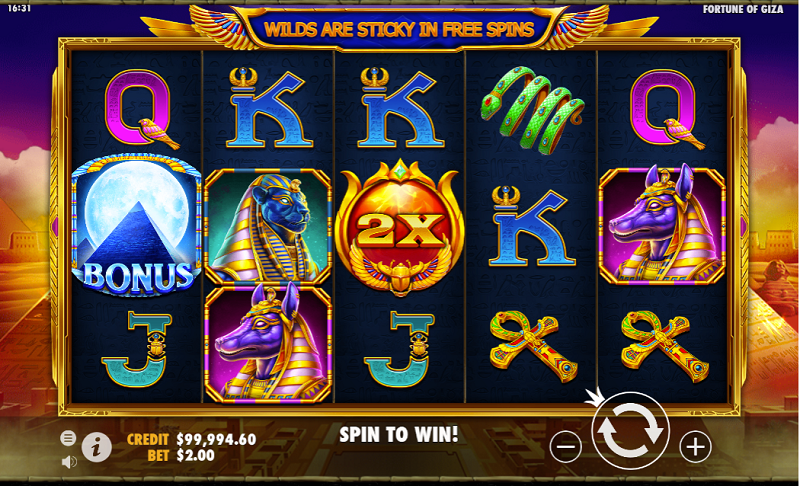 First of all, we want to highlight that as in most Pragmatic Play slots, you will encounter 5 reels and 3 rows in the main playing area here. A total of 20 paylines will be responsible for establishing winning combinations, and as for the betting range, you can start gambling here with as low as 0.20 EUR and go up to 100 EUR. If you get really lucky, then you might as well obtain the highest payout of this slot which is 6.750x your initial bet!

Fortune of Giza features an RTP of 96.48% which is roughly above average in the gambling world, so you have a chance to earn decent amounts of money here. It basically means that the slot will return you 96.48$ on average if you wager 100$. It is also worth noting that this is a highly volatile slot which means you have the possibility to generate large payouts but don’t expect them to come very often. So, you have to wait for your chances.

Before jumping on the Fortune of Giza for a detailed review of this game, we want to highlight that it will be better for beginners to try out a Fortune of Giza demo version first. By doing so, they will get familiar with the playing mechanics and get prepared for Fortune of Giza real money gambling very soon!

A Better Look At a Fortune of Giza Design Aspects

The majority of slots released by Pragmatic Play include pretty much a similar structure. As we have mentioned above, Fortune of Giza is an Egyptian-themed game and you will encounter all the attributes related to this country. So, if you are a fan of their culture then you should expect enormous enjoyment here!

As soon as you enter the game, you will see that the background features pyramids, a sphinx, and different types of buildings that were pretty common back then. The main playing area is located on the pyramid of Giza which was the largest one in ancient Egypt. Also, you will see that clouds have an animated effect in the back and pyramids are shining every now and then in order to create more beautiful and eye-catching sightseeing. 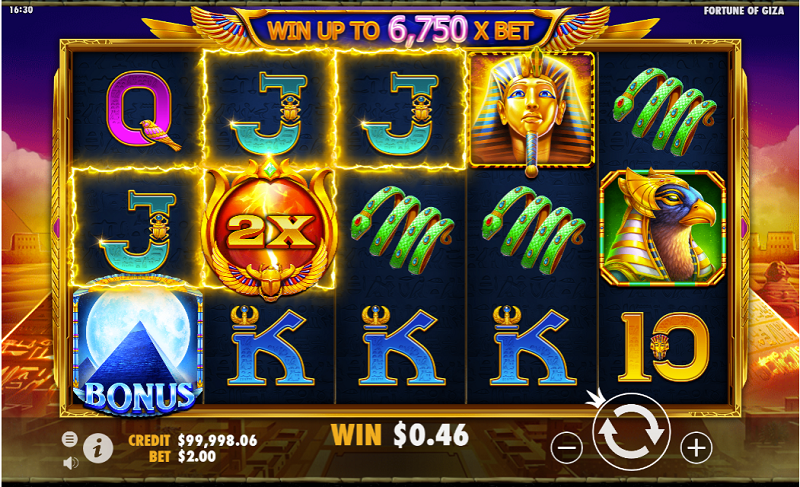 It comes as no surprise that the yellow color dominates in this slot. The reels are filled with traditional Ancient Egyptian symbols, including the ankh, goddess Bastet, Anubis, Horus, and a pharaoh. The creators have worked hard to establish figures that would have pretty much the same looks as back in ancient times.

The bonus symbol is depicted as a pyramid also, but the main difference is that it represents a blue color and a large moon behind it. As you can tell, all the icons here are connected with ancient Egyptian culture and they work together in order to create a mesmerizing playing atmosphere as you spin the reels.

Most importantly, you have a chance to enjoy spinning these beautiful reels on your smartphones as well. Pragmatic Play developers understand the fact that smartphones are the most frequently used devices in the world, so they have established a Fortune of Giza mobile version that provides the same high-class playground.

Fortune of Giza Audio – How Does It Feel?

Fortune of Giza also features a pleasing soundtrack in the background that follows the flow of the game perfectly. This is crucial since if the slot includes boring and unpleasant sound effects, then players will quickly lose interest in the game and eventually leave.

So, the creators have made sure to give punters an appealing playing environment. You will hear pleasing and calm music here that will definitely have an ear-catching effect on every visitor!

If you want to learn how to play Fortune of Giza properly, then you have to read this section. As we have noted above, the betting range here includes 0.20 EUR – 100 EUR which is a pretty decent proposal for this provider. Every symbol includes a different amount of payouts and the largest icon is the pharaoh himself that will reward you with a 37.5x payout if you collect five of them on a payline. 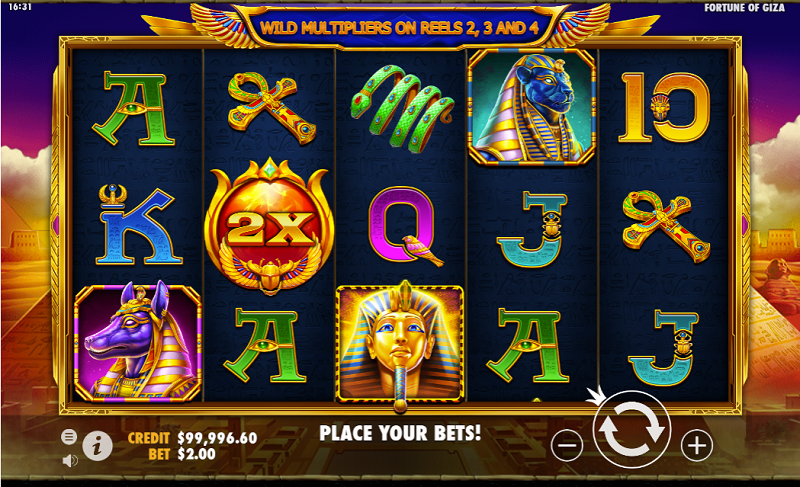 The scarab-style wild offers substitution powers and can replace any symbol except the bonus icon to help create wins. The wild appears on the second, third, and fourth reels. In this game, wilds also carry random multipliers of either 2x or 3x that come into play if they are involved in a win and they are added together if more than one is involved in making a successful combination of symbols.

Fortune of Giza Bonus Game At a Glance

The full moon pyramid is the bonus symbol and appears on the first, third, and fifth reels. You need to collect one of these on each of the three reels and you will trigger the free spins bonus. The bonus symbol is a scatter symbol and also offers a win of 5x your total bet for landing three anywhere on the grid. 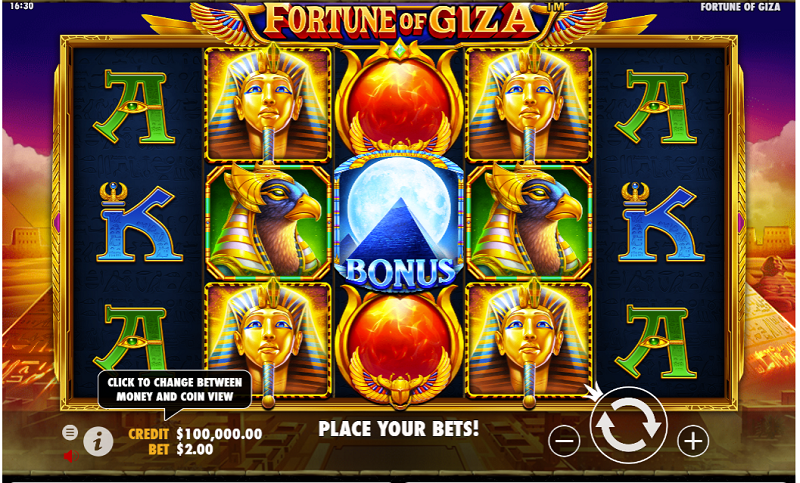 Unlike with many free spins bonus rounds, there is no set number awarded for landing three bonus figures. instead, a random number will be provided at the beginning of the round. In an interesting twist, a 3×3 grid will show reels spinning and reveal free spins in each cell that will be added together and the total will be awarded.

The wild symbols that land will become sticky and stay in place along with the multipliers they contain. It is important to note that the free spins can’t be retriggered as you play since the bonus symbols don’t appear on the special free spins grid. You can win the highest payout in the bonus round which includes 6.750x your bet!

In this Fortune of Giza guide, we have talked about a simple yet delightful slot that was created by the industry’s leading software provider Pragmatic Play. If you are in love with ancient Egyptian culture, then all the fun and excitement are waiting for you here. Spin the reels and go on a journey to ancient Egypt, and most importantly, win huge amounts!