Play’N Go brings us yet another video slot with its own backstory and characters in the form of Hooligan Hustle, developed in 2021. This humorous game comes with the hooligan characters John, Steve, Dazza, and Gary – as always, the provider has put its hard work into making the game interesting.

The slot offers us splitting symbols, mystery symbols, and 3 types of free spin bonuses. With 248 832 ways to win, you could be rewarded up to 10 000x your bet. There is a Rumble Row at the top of the reels – we will explain its purpose and other game mechanics more in detail later in this Hooligan Hustle guide. 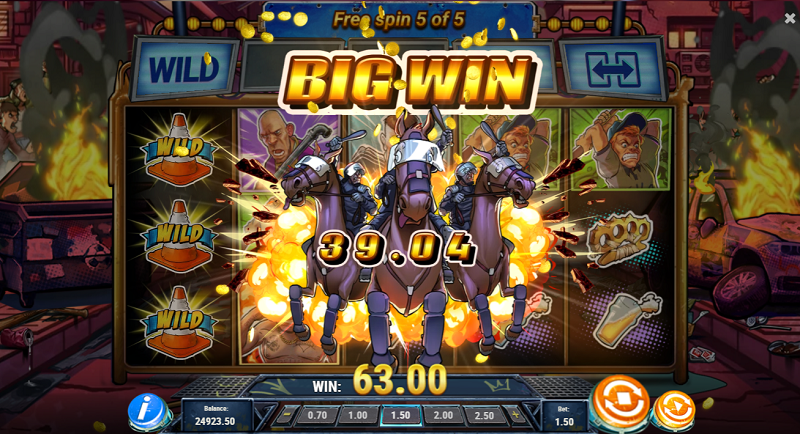 The high-risk game has an RTP of 94.27% and 243 pay lines. The players can take pleasure in the Hooligan Hustle demo version in case they want to play for free and learn the game in detail before betting. You can enjoy the game on a mobile platform with no issues if that’s more convenient for you. The players who use cryptocurrencies to make transactions can easily find the slot on online crypto casinos where they will be able to make payments with digital coins to play Hooligan Hustle.

Hooligan Hustle design has the type of details that describe the narrative with comic book-style pictures. The whole game has a comic book vibe. The symbols are presented with their own assigned colors in the illustrations.

The reels are set in the middle of a street where the football fans have gathered to watch the street fight with broken bottles and trash scattered around. With smoke coming from the police car on a sidewalk and the flags of different colors hanging from the buildings to represent the opposing sides. You can also see the stadium in the distance. You can even enjoy these brilliant visuals on the Hooligan Hustle mobile version. 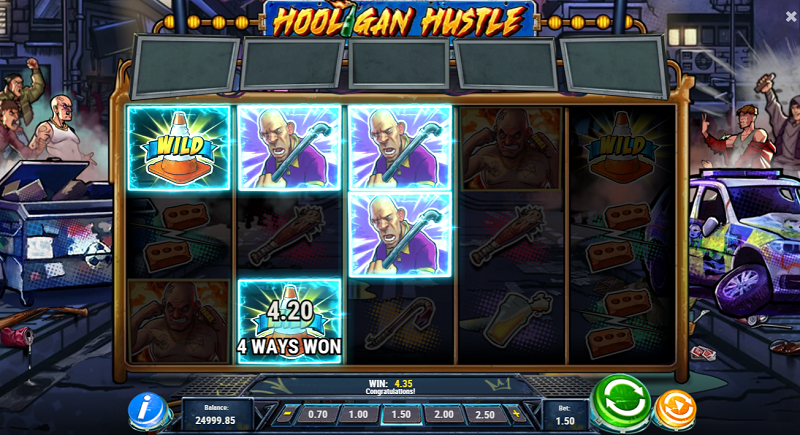 The slot has 4 main characters with their individual colors on their symbol backgrounds. The characters have their own style and look as well as their purpose in the game. Their looks and visual representation seem to be heavily inspired by the stereotypical British thugs who have a great passion for football with tattoo-covered bodies, cheap clothes, and beer bottles in hand.

The characters are holding different tools to use as weapons against each other, they have bruised eyes and bared teeth to show their irrational anger. The streets are foggy and the buildings are vandalized.

Altogether the slot design is a brilliantly done animation of madmen in the streets of London during the football season.

Hooligan Hustle Audio – How Does It Feel?

The audio of this slot is truly something else. The game has its own soundtrack – with lyrics and music. The song sounds like it is sung by these hooligans who love football a bit too much. The melody is upbeat and fills you with adrenaline. The sound effects are the yells and the exclamations of the characters with heavy British accents – the shouts are mostly “c’mon, lads!” and “let’s go” – the lyrics of the song mostly include the words “go” and “nobody can catch me” – creating the atmosphere of street fighters.

The slot includes sounds of broken glass, explosions, and sirens. When you land a bonus symbol you hear the cracks and the sound of a heavy box full of glass falling. There is a rattle of coins each time you land a win.

Our readers already know that the game offers up to 248 238 ways to win and 243 pay lines, but that’s not all. Hooligan Hustle has multiple bonus elements that increase the enjoyment of the gaming experience.

The actions you can take during the game include an autoplay feature, you can enable the feature in the menu. You can activate a hyper spin feature by pressing and holding down the spin button – this way the reels will start to spin extra fast. You can even use the fast play mode. 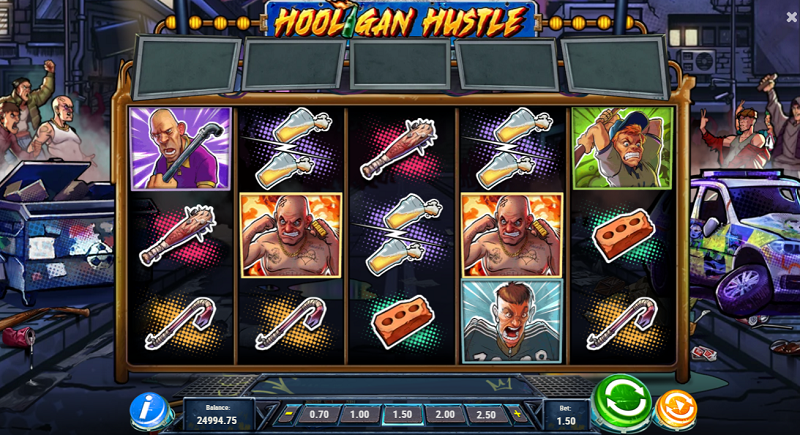 Adjacent symbol combinations award way wins according to the paytable that you can check out in the menu of the game. When several pay lines are landed on a spin, all of the winnings will be added together. All of the wins that you collect from the bonus features will also be added to the winnings from the main game. The Hooligan Hustle free spins will be played with the same bet that was active when the feature was triggered.

The game has 5 reels and 243 pay ways and the symbols are split into two randomly. Scatter is the only symbol that isn’t affected by the split feature. The slots include mystery symbols that may reveal any regular symbol or a Wild. 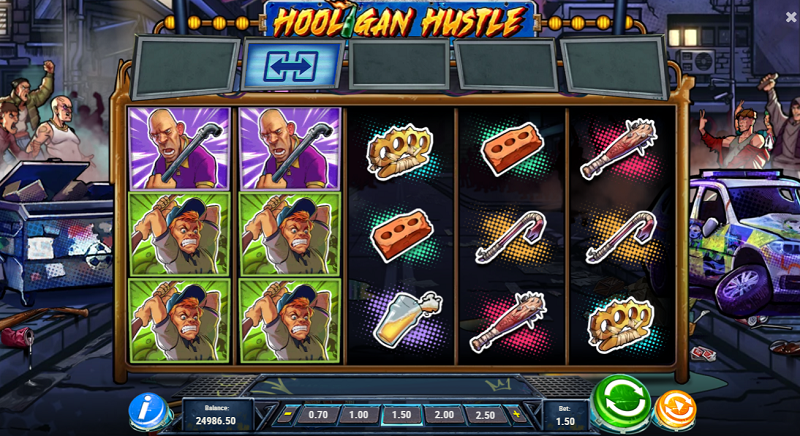 At the top of the reels, there is a Rumble Row that could be activated randomly at any point in the game. With this, you will be awarded a bonus feature on the reels below. The reward could be a Wild reel that awards a reel full of Wild symbols, X2 multiplier will double your winnings, Double Trouble will sync two of the reels. 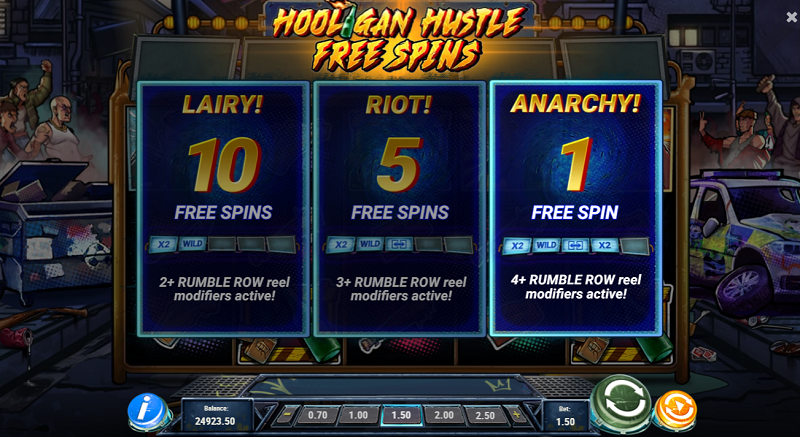 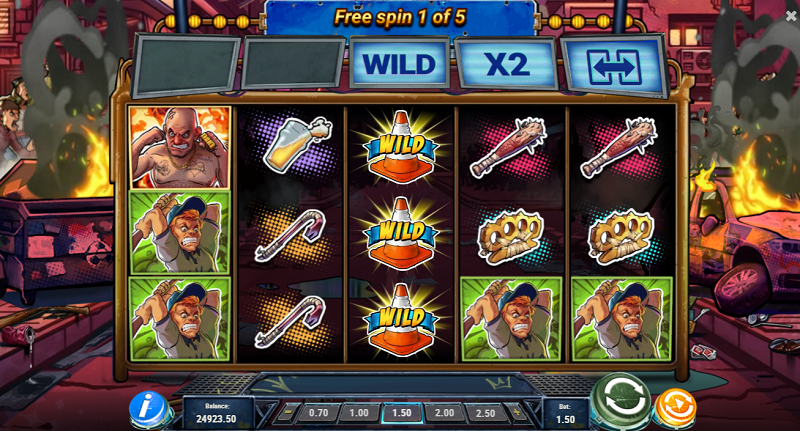 This video slot is brought to us by one of the most popular casino game developers in the industry – Play’N Go. The game is presented in detailed and high-quality visuals with its own story and theme of British thugs fighting in the streets because of a football game. It also has the comic book vibes that we don’t see often in slots.

The game has a high-risk level but comes with big prizes, you could win up to 10 000x your bet. There are 248 832 ways to win with 243 pay lines. The game is available for playing with crypto at crypto online casinos, and you can even play it on mobile devices.

As you can see, Hooligan Hustle is worth a shot because of its great visuals and overall enjoyable gameplay.