Magic Guardians is an impressively-designed slot game that was released in March 2015 but still remains a very popular game among players. It comes from quite a popular software provider called EGT which is special with its fascinating gaming aesthetics. So, all you should expect from playing Magic Guardians real money is a magical journey in the world of rebels and warriors.

Even though the game is impressive with its amazing atmosphere, the features are exciting too. This is a 5-reel game that includes 3 rows and 25 betting ways in total. The main prize as the highest amount of payout equals x15 000 of your stake. During the game, you can raise your winning chances with free spins, scatter, and wild bonuses.

The volatility of Magic Guardians is medium so it is a great choice for new players too. The RTP is also higher than the average and equals 96.02%.  In addition, betting ranges are pretty low and you need to place at least 0.25 USD as the minimum amount whereas the maximum is 25 USD. This means that while you are playing this mythical slot machine, you have a chance to win 375 000 USD in total.

EGT provider tries to create a super comfortable experience for everyone. That is why they use advanced technologies such as HTML5. This means that Magic Guardians mobile version is available for every type of device user with high-quality graphic visuals.

The game is inspired by mythical creatures and tries to create a very magical world with unique creatures and characters. It definitely provides an unforgettable gaming adventure. 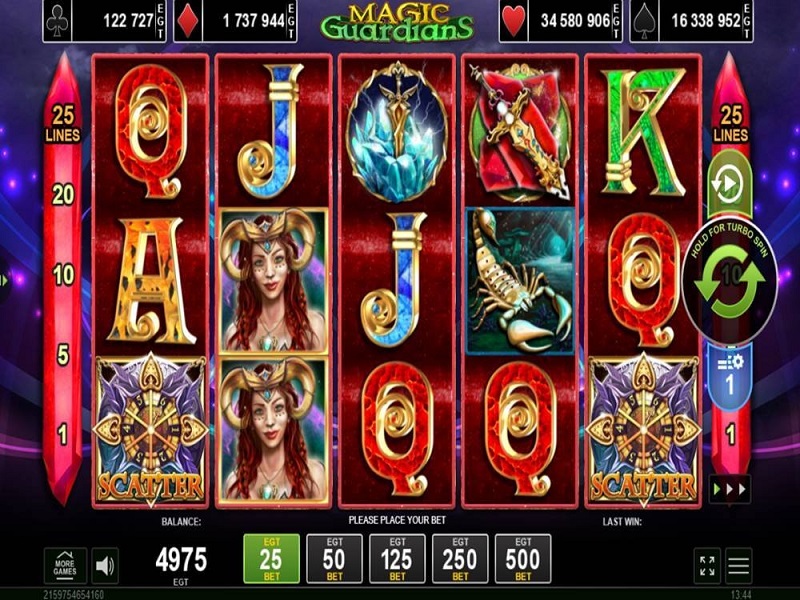 While playing, you will be impressed with the amazing playboard as well as background. Behind the board, you see a magical space with neon blue and purple flashes of lightning. This creates a very mystical aesthetic. The board is dark red and designed with red crystal stones. Next to the main playboard, you can see huge crystal stones.

The symbols are designed perfectly. The lowest-paying symbols which include letters and numbers are designed with golden frames and ornaments. Their style perfectly merges the game aesthetic. With the special symbols, you play with the golden sword with colorful crystal stones, another sword with ice stones, beautiful goddesses with golden crowns, golden scorpions, green snakes with golden crowns, magical white unicorns, and the main character the mythical warrior with the silver hair.

Magic Guardians Audio – How Does It Feel?

The game is fully inspired by mythological creatures. The graphic elements are busy with diverse golden ornaments. To maximize the fabulous and luxurious vibes, the soundtrack includes different musical instrument sounds and low rhythms which perfectly merge with the visuals. While playing, you will be amazed by the harmonic melodies.

Even though the visual aesthetics are unique and very different from other competitor slots, the gaming rules are similar to the classic slot machine. To start with the letters and numbers, can activate pretty high payouts but they are the lowest-paying symbols. Golden scorpions and green snakes with crowns are medium-paying symbols. The main characters – the impressive-looking goddess and warrior man with the silver hair are the symbols with the highest payouts.

This 5-reel game has three special symbols which activate different bonus features. These symbols are white unicorns and a golden compass with the titles ‘Super Game’ and ‘Scatter.’

For risk-free lovers, Magic Guardians demo mode is available on the majority of casino websites. So, you can play this magical game without placing bets. 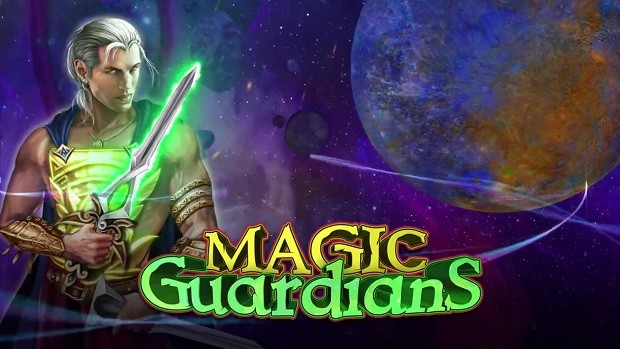 The journey to the mystical world with the mythical creatures becomes more amazing with the great special features. The bonuses are activated after landing at least three scatter symbols on the reel. This will bring the player 15 Magic Guardians free spins. The scatter symbol is a golden compass with purple crystal stones. In addition, if you land two more scatters on the reel during the free spin rounds, you will get 10 super game bonus features which means better winning combinations and more chances of winning.

Another special symbol is the wild symbol which is a white unicorn and helps you land more winning combinations. So this symbol substitutes every regular symbol except the golden compass and super game.

Magic Guardians is a magical game that brings extra excitement to the players with amazing payouts as well as special features. With the game aesthetics, the game provides the highest quality visuals with unique symbols and characters. With busy and luxurious aesthetics and impressive audio, the gaming process becomes more adventurous and amazing.

Additionally, with the great winning possibilities, every player has a realistic chance to win the main cash prize. Because of these impressive gaming opportunities, we recommend starting playing Magic Guardians as soon as possible!