Mental is a horror-themed online video slot by the popular Nolimit City gaming company that has brought us multiple games with interesting and unique designs. This particular slot is set in a mental hospital where the patients suffer from illnesses and torture.

This slot is for the fans of American Horror Story: Asylum. The game follows the classic asylum horror story plot that never fails to give us chills. The players can see it in the design and the detail of the slot, but that’s not all that makes the game so enjoyable. Mental also includes numerous bonus elements such as Mental Free Spins rounds with different themes and rules – it also includes splitting symbols feature to keep things interesting. 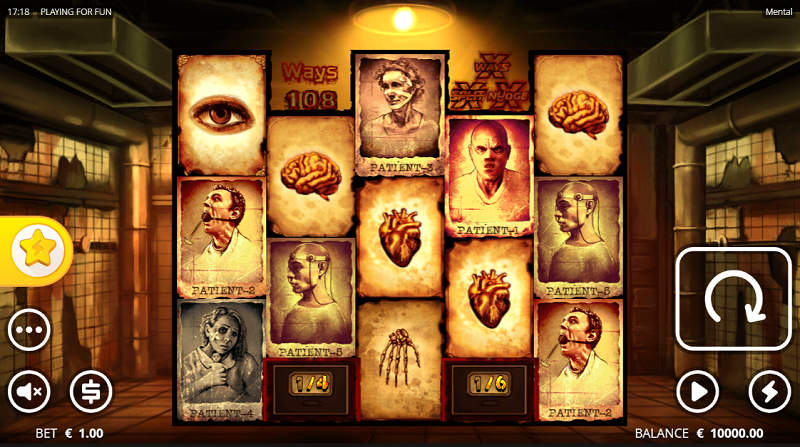 This game comes with 96.07% RTP, a hit frequency of 34.19%, and a high-risk level. You have over 108 ways to create a winning combination on the 5×3 reels. The slot doesn’t fail to follow the horror theme in the maximum wins category either, as the maximum payout of Mental is 66 666x the bet.

Mental is available for cryptocurrencies in multiple online casinos, so if you like to use digital coins for fast and incognito withdrawals and deposits, the game will not disappoint you.

The slot doesn’t betray its horrifying premise with the design. You can see that the animations and the visual details of the slot are exactly what they ought to be and more. The players can enjoy the graphics of high quality.

The reels are set in an abandoned and dirty mental hospital that sends chills down our spines. This is where the brutal doctors would experiment on their tortured patients. The asylum is scary enough without the symbols that bring the horrors to another level.

The symbols with extremely detailed design include scary bugs, human organs, and illustrations of patients being tortured. This slot is not for the weak-hearted players. The bonuses and the winnings are presented to you in an old film reel with helpless patients in the background. 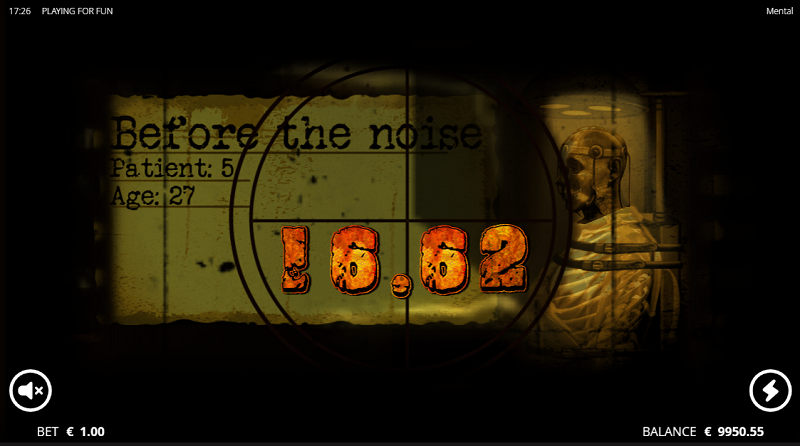 The game also includes fire effects to show the reels that will split during the spins. The enhancer cells are at the bottom of the reels, they are the blocked cells that get activated when the fire frame effects show up on the reels.

During the Xways feature, you can see the details of blood drops around the screen. The game includes Mental free spins, Lobotomy free spins, and Autopsy free spins rounds that take us to different danger-filled locations with cold and brutal auras to give us goosebumps. 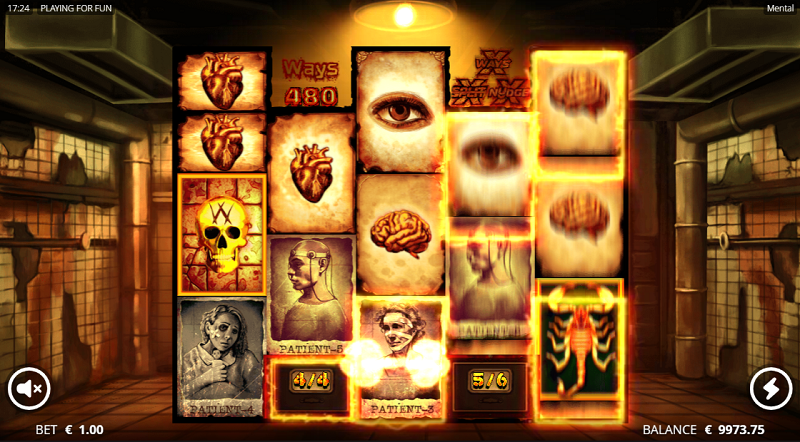 Mental Audio – How Does It Feel?

If the visuals were not scary enough, the audio of the slot will surely give you nightmares. The music in the background sounds like it was taken straight out of Mary Shelly’s imagination, as it gives you the feeling of danger and horror. The sound effects of the reels spinning are the sounds that you would hear in the walls while visiting a haunted asylum full of lost souls roaming. You can even hear screams vividly in the background.

Even though the whole theme of the slot is very scary, you shouldn’t be scared by the complex and unusual reels of the game, since the rules of Mental are not much different from other slots.

There is not a big how-to-play Mental manual that you need to use, but the game still has its own interesting features that should be explained. 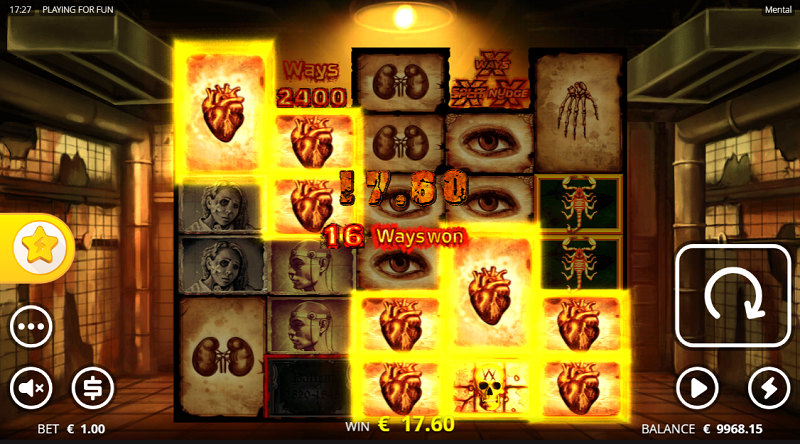 Firstly, the game has 5 reels with three rows but the latter number is ever-changing. This is caused by the splitting symbols of the reels, once the reels catch fire during a spin, the landed symbols in the fire frame are divided into two pieces.

The game comes with enhancer cells at the bottom of the 2nd and the 4th reels. The 2nd reel enhancer cell is activated by 4 fire frames and the 4th one is activated by 6 fire frames. The cells could reveal a patient symbol, a dead patient symbol, xWays symbol that has the power to reveal three symbols of the same kind and expands the height of the reel, an xSplit that splits itself into two Wilds, a Wild, or a xNudge Wild that can increase the win multiplier by 1.

Along with these features, Mental includes a Mental Transform element that is triggered by a Spider symbol landing on the second or the fourth reels. The Spider gets transformed into another symbol.

As for the free spins bonus, we have already mentioned that the slot offers three versions of the bonus: the Lobotomy, the Autopsy, and the Mental free spins. 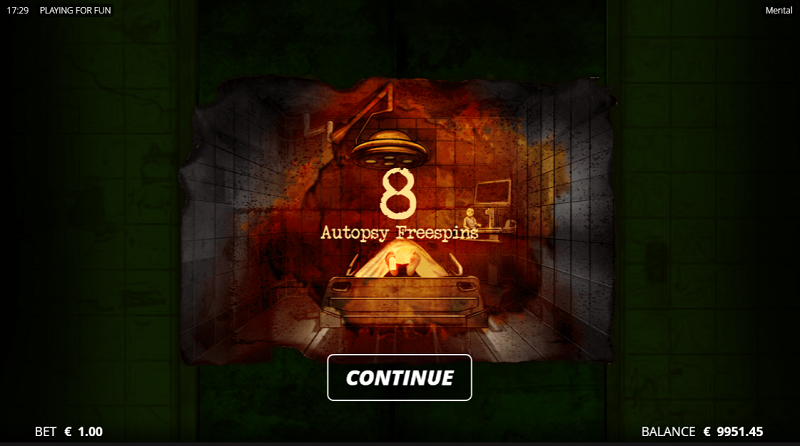 Mental Bonus Game At A Glance

It will be difficult to explain all of the benefits of the bonus games that the slot offers, but we will try to let you know the essentials in this Mental guide.

The player needs to land 3 Scorpion symbols in order to be rewarded with 8 Autopsy free spins. Each one of the Scorpions with fire surrounding it awards the player with one extra free spin. The scorpion symbol only shows up on reels 1, 3, and 5 in the main game. During the Autopsy free spins feature, a maximum of five positions randomly gets lit up on fire on each spin. The fire frames stick to the reels until the end of the bonus round. 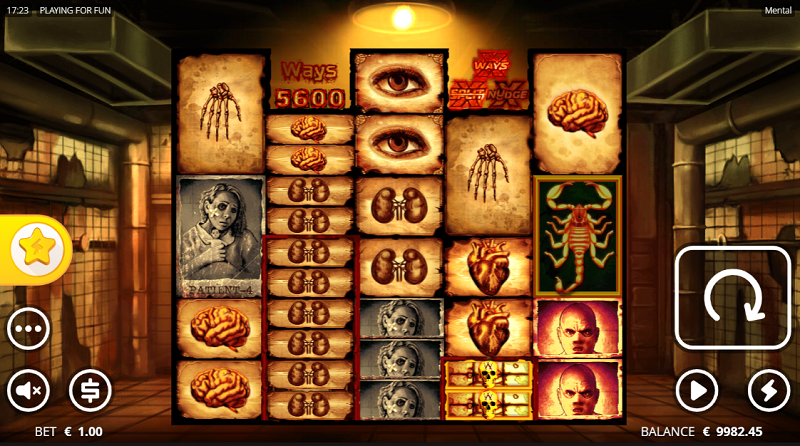 During the Autopsy free spins feature the player only needs to land one spider symbol to upgrade the game to Lobotomy free spins and be awarded one additional spin. The spider symbol gets stuck to the reels and stays there with the fire frames until the round is over. The spider activates the transform feature for every spin during the bonus game.

Mental free spins round the most desirable feature of the game, it is won by 3 Scorpions and 2 spiders landing on the main game reels. Both of the Spiders stick to the reels and each spin comes with Mental Transformations.

With everything in mind, we can confidently say that the slot is worth a try. Mental has a lot to bring to the table, starting from the thrilling visuals that stand out. The graphics and the details are so well illustrated that you would think you are actually a part of the horrendous asylum. Fans of horror will definitely be pleased with the presentation of the terrifying mental hospital.

Notably, the players who don’t want to gamble but are interested in the awesome gaming experience that Nolimit City offers can play the Mental demo version for free. You can also enjoy the game on mobile devices if you have a busy schedule and would like to play the game on the go. This slot is crypto-friendly so you can even use digital coins including Bitcoin to play at online crypto casinos.

The slot gives the players over 108 ways to win with the addition of 3 free spin modes and multiple other special bonus features. Mental has an RTP of 96.07% – which is above the average casino games’ RTP of 96%, and the risk levels are high. The devilish slot includes 66 666x the total bet as the maximum payout.

In conclusion, Mental is 100% worth checking out if you are the type who takes pleasure in horror games with excellent visuals and grand bonuses.