Puebla Parada was established by a well-known software development company called Play’n GO and it has engaged a great number of punters ever since due to its high-quality services. Are you fascinated with the Mexican lifestyle and culture? If the answer is yes, then this game was most likely created for you! The name itself is the representation of the place where the famous battle between France and Mexico took place. The creators have worked very hard to revive the old Mexican components in this slot.

You will notice this right away upon entering the game since the playing interface features pretty bright and vibrant colors that have an eye-catching effect on every visitor. Every aspect of this game starting from the name will remind you of Mexican customs and symbols also are displayed with traditional elements that are very common in this country. Due to the fact that so many people are interested in this slot, we are creating a Puebla Parade review where you will learn all the attributes and qualities. 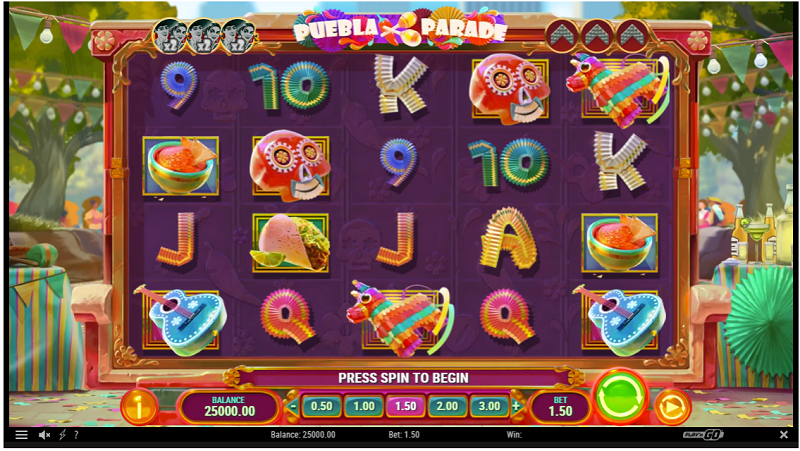 For starters, we want to point out that this game includes pretty attractive features in terms of game mechanics. Puebla Parade includes an RTP of 96.20% which is slightly above average in the gambling industry and you have a chance to get back considerable amounts on average. Moreover, players are able to earn huge prizes in this slot but not very frequently due to high volatility.

You will encounter a standard playground consisting of 5 reels and 4 rows, but the grid can grow up to 7 rows high and as a result, a total of 421 paylines will be formed. The minimum amount of bet you are able to provide here is 0.05 EUR, whereas the maximum amount includes 100 EUR. If you get really lucky, you might generate the highest payout of Puebla Parade which is 5.000x your initial stake!

As you can tell, tremendous fun and enjoyment are waiting for you in this slot, and if you want to get familiar with the gaming mechanics first, we recommend playing a Puebla Parade demo version first. By doing so, you will learn all the necessary things and get ready to gamble with Puebla Parade real money in the future. Down below, we will provide detailed information regarding every aspect of this famous game and you will learn how to win a lot of money here. Let’s Start!

A Better Look At a Puebla Parade Design Aspects 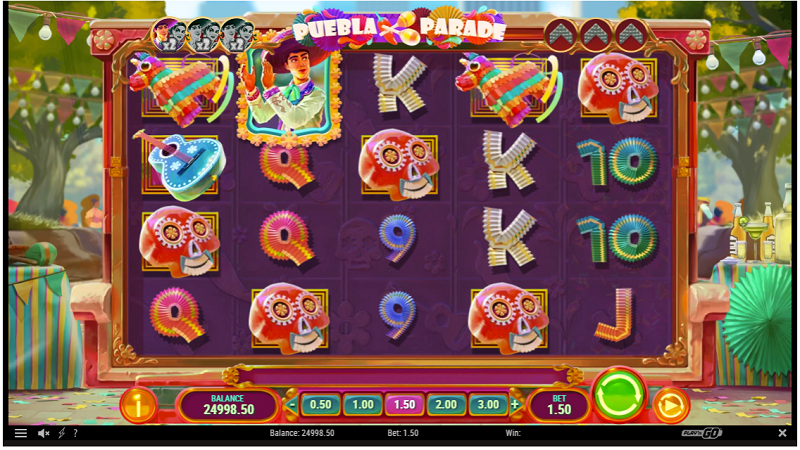 As we have mentioned above, the design of the Puebla Parade will most likely take you on a journey to Mexico since you will run into all the components connected to its culture. Even the name itself is well-known in this country as it is a representation of victory and glory! The first thing you will notice as soon as you enter the game will be diverse and bright colors that have a really positive effect.

The background of this slot features some kind of outdoors surrounded by trees and different decorations. There are also tables where food and drinks are placed which is one more sign of a Mexican lifestyle.

When it comes to the symbols in Puebla Parade, you will come across various colored items related to Mexican customs such as guitars, horses, and different kinds of meals. As for the wild figures, you will see a man and woman dressed elegantly in Mexican suits getting ready to dance on the reels. All these icons work together to create a delightful playing atmosphere that will engage the majority of newcomers.

What’s more, Play’n GO developers have made sure to establish a straightforward and easy-to-understand playground where all the essential buttons are available on the screen. This means that you will not have any difficulty gambling here. Also, there is a Puebla Parade mobile version that is as exciting and enjoyable as the real one, so you have a chance to play this slot on any device.

Puebla Parade Audio – How Does It Feel?

Puebla Parade includes a pleasing soundtrack in the background that has an ear-catching effect on every player. You will hear nice guitar music that includes Mexican melodies and also talks of many people in the distance. So, you have an impression of being somewhere outdoors where people are having a party that is accompanied by appealing sound effects.

This aspect is essential for every casino game and creators at Play’n GO understand very well that pleasing music is what makes players engaged in the game. Therefore, they have worked hard to create a pleasing soundtrack for Puebla Parade that will make your gambling experience pretty unique and memorable! 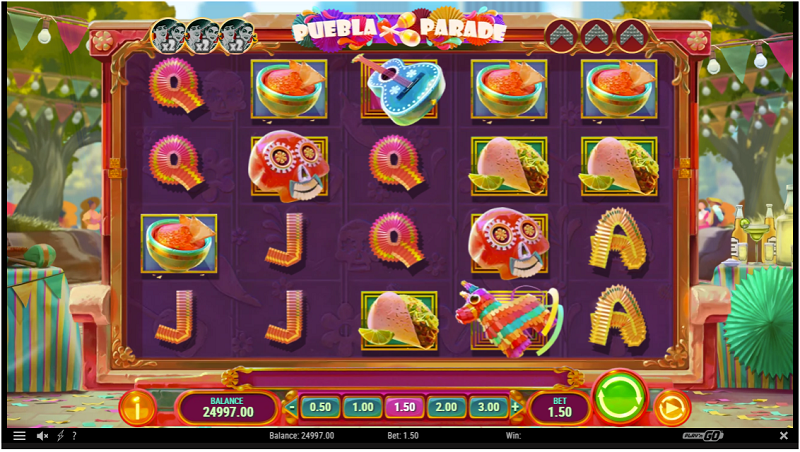 Do you want to learn how to play Puebla Parade properly? We will provide detailed information regarding its game mechanics in this section. As we have already said, there are a total of 421 paylines and every symbol is responsible for generating different kinds of payouts, with the highest being a horse figure.

The wild symbols are called senior and senorita which have the ability to unlock re-spins and pair up in order to extend the reels. It is important to note that the wild icon is also able to replace all the other ones and contribute to the winnings significantly. They are sticky symbols that walk during re-spins and free spins.

Senior and Senorita wilds try to create Pareja wilds during re-spins when they are collected next to each other. In this case, they will be combined into one icon which is called a Pareja wild. When this icon is formed, it gets a win multiplier of x2 and extends all reel height by 1, up to 7 symbols. During those re-spins you have a chance to earn a substantial amount of winnings, so you need to pay attention to wild icons for the most part in this slot. 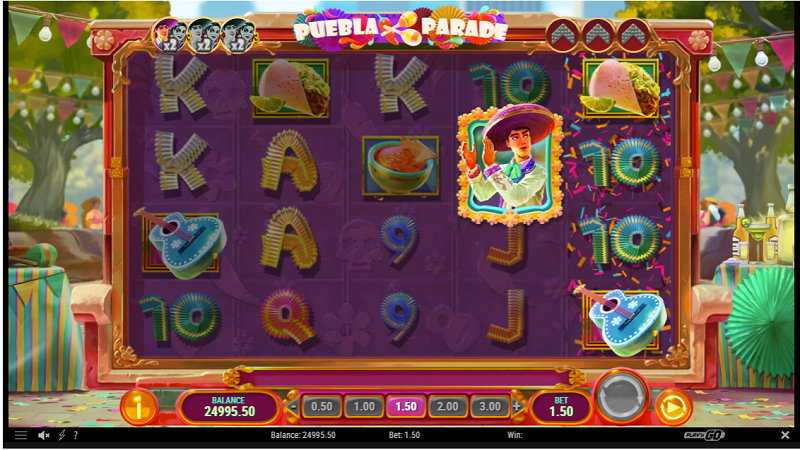 We want to take a look at the bonus game of Puebla Parade in this section. As we have noted above, wild symbols are able to combine into one icon that is called a Pareja wild and during re-spins up to 3 Pareja figures can be formed.

Once every Pareja symbol is created, they will trigger Puebla Parade free spins after every re-spin is done. During this free spins feature, Pareja wild win multipliers change to x3 and as a result, winnings are increased accordingly.

You will get rewarded with a total of 8 free spins and they are played out with all Pareja wild figures moving around. They help you to create winnings combinations on the reels that will give you a lot of money in the end.

If you get really lucky, you have the opportunity to receive the highest payout of Puebla Parade which is 5.000x your initial bet! This is a very lavish opportunity that you will not find in the majority of slot games nowadays.

In this Puebla Parade guide, we have described one of the most popular slots Puebla Parade and its gaming mechanics in detail. This game was released by some of the top software development providers called Play’n GO and therefore, you will come across high-class services here.

Puebla Parade features pretty attractive qualities in terms of game mechanics as you will run into high RTP and volatility, whereas the highest payout includes 5.000x your bet! Hence, tremendous chances are waiting for you here!

You have a chance to dive into the Mexican lifestyle and culture in this game since all the elements of the playing interface are connected to it. So, you will enjoy a party somewhere in a Mexican suburb accompanied by some nice music in the background and the overall feel will be exceptional and memorable!