Queens of Glory is an online video slot by OneTouch gaming company. The lost has a theme of glorious queens with their own prizes to share with you. The queens may bless you with three types of free games as well as multiple other bonus features.

The game design seems like it takes place in a palace of Goddesses. As for the set – the slot has 5×3 reels with 10 pay lines. The slot has an RTP of 96.03% and is of medium volatility. The players can enjoy the game by betting up to 5 coins. You can play with digital coins at online crypto casinos where Queens of Glory is found.

Queens of Glory mobile version is available for the players who don’t have enough time to open their laptops and start playing on browsers, you can simply play on your mobile devices conveniently. You can play the demo version of the game online for free so you can enjoy the gaming experience without having to bet real money.

A Better Look at Queens of Glory’s Visual Aspects

The slot has a very specific theme and design. The reels are set in a palace in front of big and tall windows that let sunlight in. During the main game, the lightning comes in cold colors and the area is lit in light blue. During the free games that the scatter provides, the sunlight gets golden and the room gets lit up in warm colors. 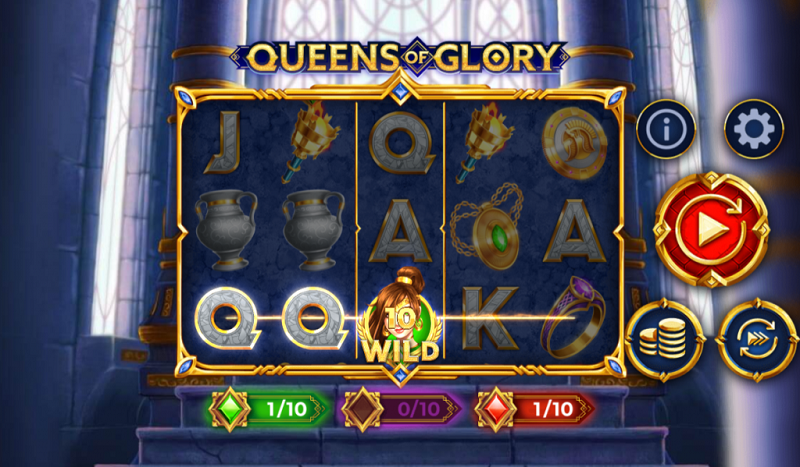 The slot has three main characters – the three glorious Queens of Ruby, Emerald, and Rose – these gorgeous royals have the power to reward you with the free spins with their own bonus elements. The queens have their personalized clothing and their given free spins are also played with their themes.

You can see the entire design of the queens during each of the Queens of Glory free spins rounds. The Ruby Queen has black hair, red eyes, and wears red garments. With a big golden crown and red lips, she comes with a red fan. The Emerald Queen has dressed accordingly in emerald clothing with gold elements, she has long brown hair and lovely green eyes. This queen seems to be the warrior of the three as she holds a big spear with a golden peak. The third queen that stands in the middle is the Rose queen dressed in purple. She stands tall with a big golden crown with purple diamonds and seems to have magic powers. 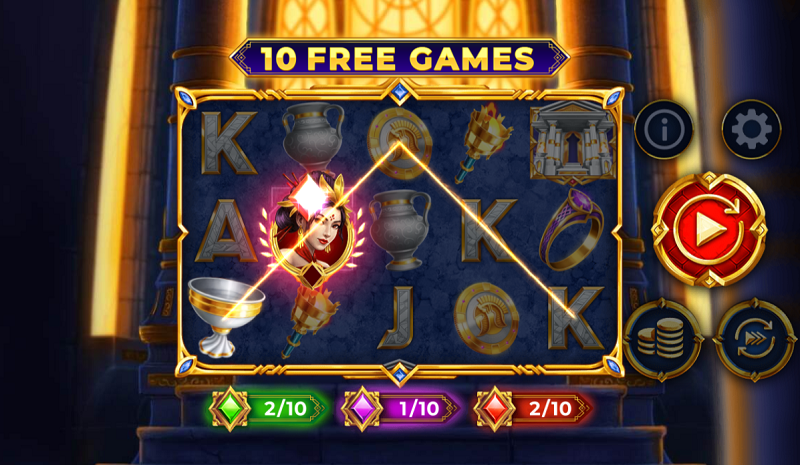 Queens of Glory Audio – How Does It Feel?

The background music of the slot sounds fun and upbeat. Each time the symbols land you can hear a ding. The game gives you the rewards with the sound of rattling coins. The music gets louder and more melodic once you hit any of the free spins rounds. All in all, the audio is high quality as we would expect from the OneTouch software developer.

The game comes with multiple bonuses and specific elements that you don’t see in most of the video slots. The players know how to play a simple slot – all you need to do is press the spin button and wait for the results. But this slot comes with many additional rounds where the rules and the rewards are different. We will explain these mechanics in this part of the Queens of Glory review. 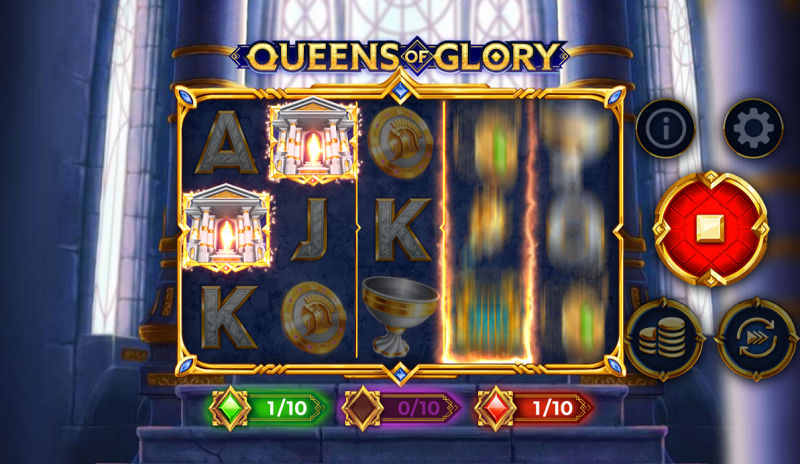 The game has 5×3 reels with one special cube in the middle, in the second row of the third reel. Collect up to 10 of each of the three Wild symbols on this cube to activate one of the three Free Games modes. The free spins can also be activated by 3+ Scatter symbols. You could even win 1000x the bet by simply landing 5 of the Scatters on the reels. The player can keep retriggering 10 more free spins regularly.

The slot has 10 pay lines with the highest paying symbols being the harp and the goblet that will give the players up to 750x their initial bet.

Queens of Glory Bonus Games At A Glance

You can trigger the free spins by hitting the Wild symbols which are the illustrations of the queens and collecting up to 10 of them. You can see the number of the queens you have collected in the middle of the reels on the bottom of the screen. 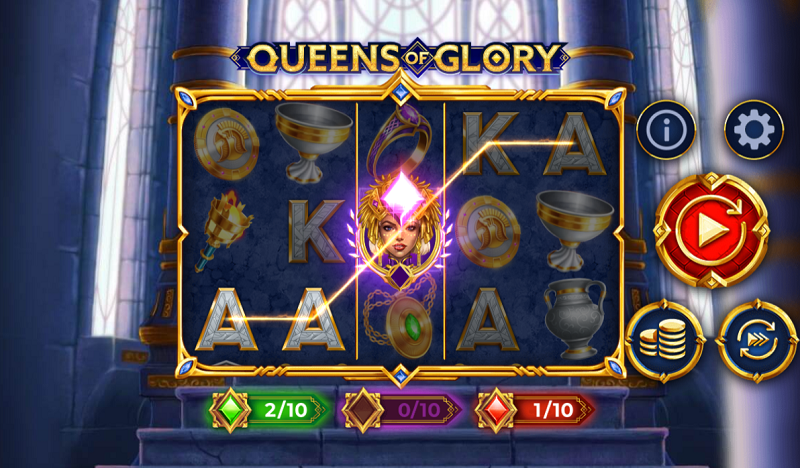 During the Scatter free spins round, you can collect the queens by landing them anywhere on the reels.

The Ruby Free Games can be triggered with the queen in red falling in the middle of the reels 10 times and the feature has its own elements. When this happens, the dominating color of the slot becomes red, you can see the Ruby Queen standing on the side of the reels. The queen gifts the player additional Wild symbols from the start of the bonus game. 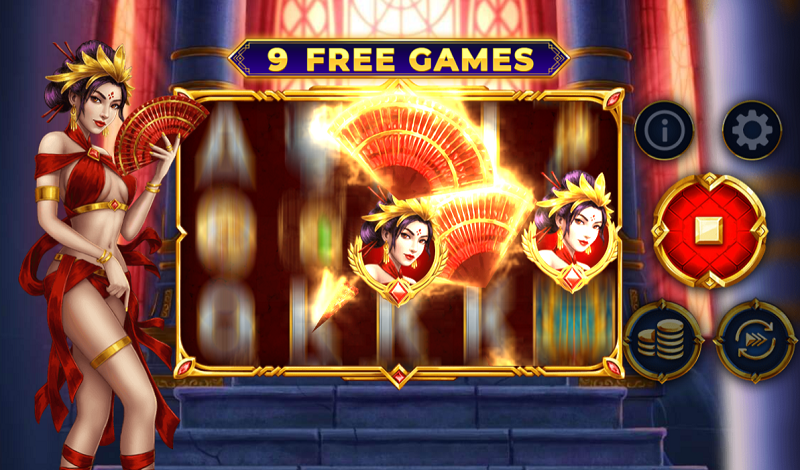 The Emerald free games give the players multipliers. The Emerald Queen appears on the side of the reels and the entire design of the reels gets dominated by the Emerald color. Each win will get increased by a random multiplier of up to x10.

The Rose Free Games feature is triggered by collecting 10 of the Rose Queen wilds in the middle of the reels and the player. This feature comes with sticky wilds, each time a Wild symbol appears it gets stuck to the reels until the end of the bonus round. 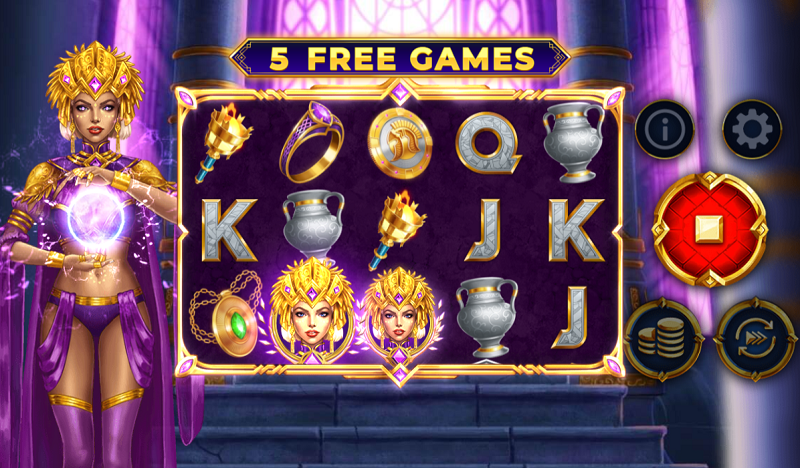 The Queens of Glory video slot is available for players from every part of the world. The slot has a beautiful design with three gorgeous queens and the marvelous palace where the reels are set. The symbols include some beautiful, golden antiques.

The game can be played on mobile devices as well as on desktop platforms, you can even play the Queens of Glory demo version for free.

The players have the opportunity to trigger four types of free spins games and win up to 1000x the bet by landing 5 Scatter symbols. With medium volatility and an RTP of 96.03%, the game will surely please the players.