Razor Shark Slot Review – An Adventure Under the Sea

Razor Shark is an exciting video slot by the famous casino games provider Push Gaming. The slot has 5×5 reels and 20 pay lines and it comes with multiple features. As for the theme of the game, it revolves around sea creatures and life under the ocean.

With this game, you can bet up to 50.00 Fun, you can choose a number of spins and the loss limit as well to get responsible while gambling. The slot has an RTP of 96.70% – a highly satisfactory amount for the players because as you know the usual casino games’ RTP is 96%.

You can choose to play the turbo mode or play the Razor Shark demo version if you wish to play the game without betting any actual money, just to enjoy the visuals and get familiar with the settings.

The players have an opportunity to play Razor Shark on mobile and desktop devices with high-quality graphics. You can bet cryptocurrencies as well if you are the type of player who prefers to make online transactions anonymously and swiftly. All you have to do is play the game at an online crypto casino.

The reels of the game are set under the sea where the sunlight barely reaches. Here you can see the lonely fish roaming in the background. The game starts with bubbles floating up the screen and the graphics and the presentation of the sharks and the fish remind us of Shark Tale by Dreamworks or Disney’s Finding Nemo. Either way, the slot gives the players nostalgic feelings.

The sharks of Razor Shark have different colored symbols and quite a funny look. The artwork is detailed with shades of blue dominating the color template. The symbols, along with the colorful sharks, include sunken items of sailors and divers, the seaweeds come in green and purple. The creatures you see in the background are floating clownfish and sea stars stuck to the ground. Other groups of fish travel across the screen every now and then as well. 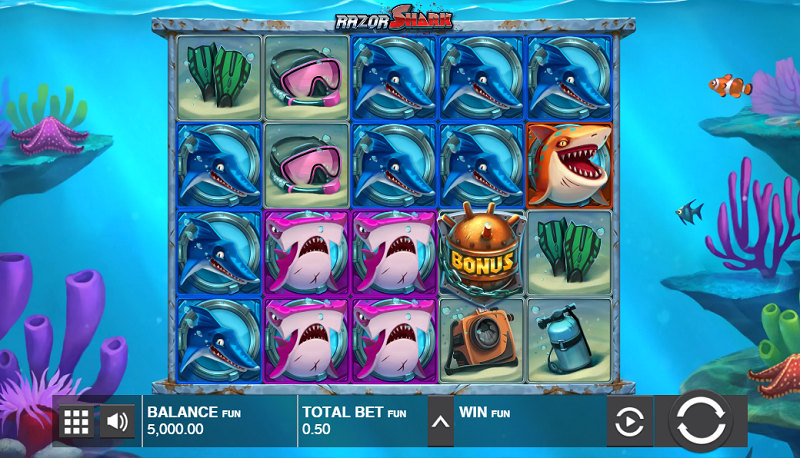 The cartoonish slot has a Great White Shark as the substituting Wild symbol that not only can replace the other symbols but also gives out the biggest payout, but we will get more in detail about that later in this Razor Shark review.

Razor Shark Audio – How Does It Feel?

The game really follows through with the Shark Tale theme when it comes to the audio. The background music has a rhythmic melody that we often hear in fun animated movies. As for the sound effects, the Bonus symbol – which is an exploding bomb – lands on the reels with a Bam sound. When you land a winning combination and the prize is presented to you a melodic sound of a guitar solo can be heard.

The music gets louder and more upbeat when the player lands a big win. When the reels are spinning with the anticipation of bonus symbols the music gets tenser.

The gameplay is pretty simple as it’s presented with classic slot elements, but the game includes several unique bonus features that the players may need help with understanding. We will try to explain the game mechanics in detail in this Razor Shark guide.

The slot has 5×5 reels and 20 pay lines – the symbols on the reels are less-paying fallen objects at the bottom of the sea and the high-paying colorful shark symbols. The highest-paying symbol of all is the Wild symbol – the Great White Shark, land 5 of them on the reels to get up to 2 500 fun as a payout. 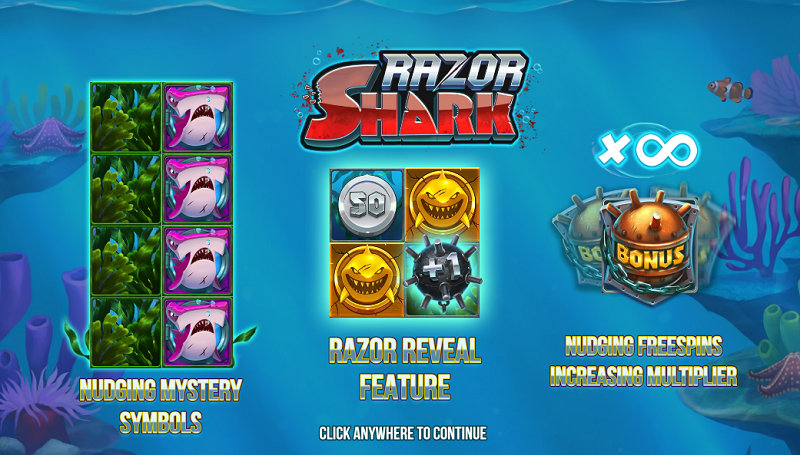 The game also lets the players take pleasure in several bonus elements that include a mystery shack – a horizontal row of green seaweeds lands on the reels, disappearing one by one during each spin and every time, the matching symbols behind the weeds are different.

If the mystery shack reveals a paying symbol, in this case, all of the win lines during the spin will be paid.

There is a Razor Reveal feature that gets activated once the mystery symbols reveal a golden shark symbol. When this occurrence happens each one of the Mystery Stack positions will start to spin and will either land on the bet multiplier coins or the scatter symbols.

If the result is the bet multiplier, in this case, the Bet Multiplier coins will range from 1x to 2500x. When all of the multipliers have appeared – therefore, the mystery shack has landed the rewards, the multipliers will be gathered and paid in total.

The game awards the player free spins by 3 or more Scatter symbols landing anywhere on the reels. The Scatter symbol is presented in the form of a sea mine. At the beginning of the free spins bonus round, the 4th and 2nd reels have the mystery shacks filling them.

When the free spins feature is activated all of the wins have the multiplier applied to them to increase the payouts. The multiplier at the start of the bonus game is x1. Every single time the Nudge and the Reveal features are triggered the multiplier is increased.

The Free Games bonus round keeps going until the Mystery Shacks are nowhere in view on the reels. The Razor Reveal feature can also be activated during the free spins round, but only the Scatter and the Bet Multiplier Coins make an appearance that makes the Mystery Stack nudge down one position.

All in all, Razor Shark gives the players a marvelously entertaining experience that can only be understood once they start to play. The slot has a cartoonish design that will definitely remind you of your favorite childhood animated movies about underwater life. Razor Shark puts you in a great mood with the upbeat background music and the fun sound effects.

The players are given the opportunity to play the game for crypto at online crypto casinos and even play the Razor Shark mobile version in extremely high quality. The players who would rather enjoy the game design and graphics without betting the real money can simply play the demo version of Razor Shark for free.

The slot has an RTP of 96.70% – higher than the standard 96% of the casino games’ RTP. Razor Shark is a highly volatile game, which means that even though the wins occur less frequently, the payouts are way bigger than in the usual slots.

In conclusion, the slot is highly recommended for gamblers who like to play animated games with unique bonus features.