With its 2020’s ocean-floor release, Pragmatic Play proved that it could create one-of-a-kind, magnificent games in beaten enough genres. But is there any point in producing the Release the Kraken 2 game after the first episode’s explosive success? The first things you’ll notice are design changes and decreased max win.

Still, this impressive toy from the provider does merit your attention. Its benefits include at least the following:

Do you want to secure your deep dip into the ocean against the Kraken’s bad mood? Then, read our review till the end to know how to make the sea monster release its treasures to you. 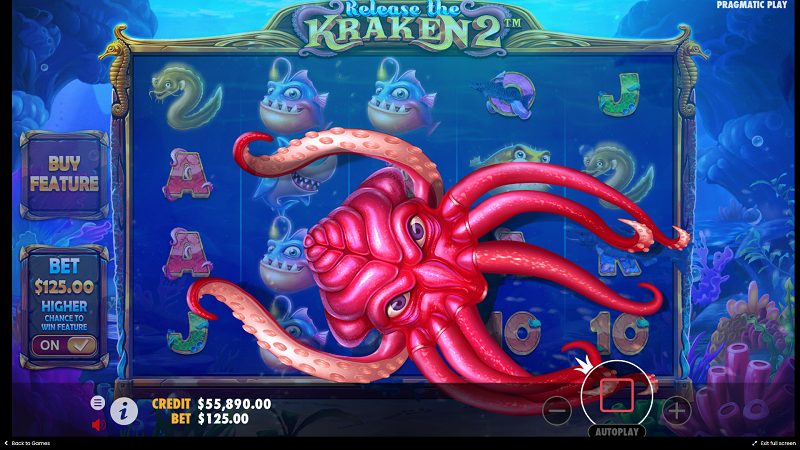 For your underwater mission, it’s important to choose the best gambling site for you. Its legal status and secure payment options are a must. But there are other significant factors you should pay attention to when making your choice. They include the software employed, bonuses, VIP programs, and many more.

Do not want to waste your time checking all this? Rely on our experts who have done the job and gathered together the top online casinos offering Pragmatic Play releases. You can open an account at any of them just now and play Release the Kraken 2 for free and for real money with the maximum benefits for you.

From the first release, there’s only a genre left. In its new Kraken slot, the provider has moved to the next level, and you might enjoy the high-quality design and animation of this 5×4 toy. Interestingly, the base game goes with 20 win lines, while there will be 40 of them in the bonus game.

The Kraken Symbol looks differently, and the best-paying symbols are new: 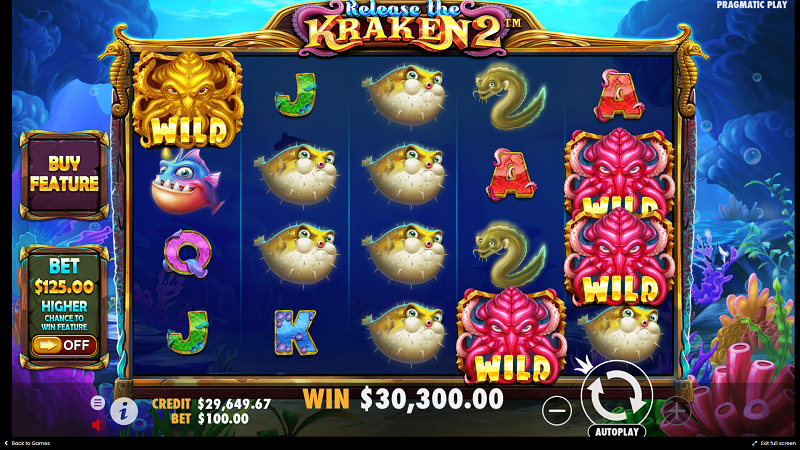 The gameplay in the Release the Kraken 2 slot machine incorporates a number of features. We’ll overview them all right after the presentation of the game’s technical parameters.

All products from Pragmatic Play, one of the most reputable developers in the iGambling industry, possess quality certificates. These slot machines deliver 100% random outcomes due to the attested RNG mechanisms. The slot under review is no exception, so you can securely play it for real cash and enjoy your honest wins.

The Release the Kraken 2 big win game has just the same RTP as the previous oceanic episode. The percentage is 96.50%, which is considered good for a slot machine.

Expect high volatility from this slot. It’s generous enough to throw smaller prizes on gamblers. However, you might need to make an effort to trigger a truly solid prize.

As to the Release the Kraken 2 jackpot, that is, the best win you can grab from the ocean floor, it’s 4,000x of your wager. The available bets may vary from 20 cents to 100 dollars. There’s an extra option that will let you place a bet of $125.

The developer has supplied its Kraken release with two user-friendly options. The first one, Buy Free Spins, will let you purchase a Bonus game and play it immediately. The second extra is the Ante Bet option. It allows you to place the highest possible bet of $125 and additionally raise the chances of activating features.

Release the Kraken 2 Features and How They Work

The feature pack in the Release the Kraken 2 by Pragmatic Play will impress the pickiest gambler. The most interesting bonuses include the following:

The best thing about the slot is that most of these features can work during the base game. Thus, the whole gameplay is anything but boring.

The central figure in the Release the Kraken 2 game is Kraken. This is the slot’s Wild Symbol. Besides its traditional substitution power, the symbol pays the highest and has other beneficial functions. Thus, four Krakens on the reels after a winning combo will trigger one Respin.

One more Wild feature can be randomly activated when you receive Wilds anywhere on reels 2, 3, or 4. The symbol starts to expand over the reel, and each of its steps increases the actual Multiplier by x1. After the expansion is complete, all wins are multiplied accordingly and collected.

Have triggered another losing spin? Don’t get upset since the Kraken can appear just from nowhere. It’ll creep over the grid and substitute symbols so that your losing spin will turn into the winning one!

Collect 3+ Bonus Kraken, and the extra round will be unlocked. The minimum set of spins is four, and the lowest Multiplier is x2. Before you play the session, you’ll be offered a Gamble round. Here, you can open up to sixteen chests and thus increase both Free Spins and the Multiplier for the Bonus game. However, you may reject the offer and play with the options you’ve won. 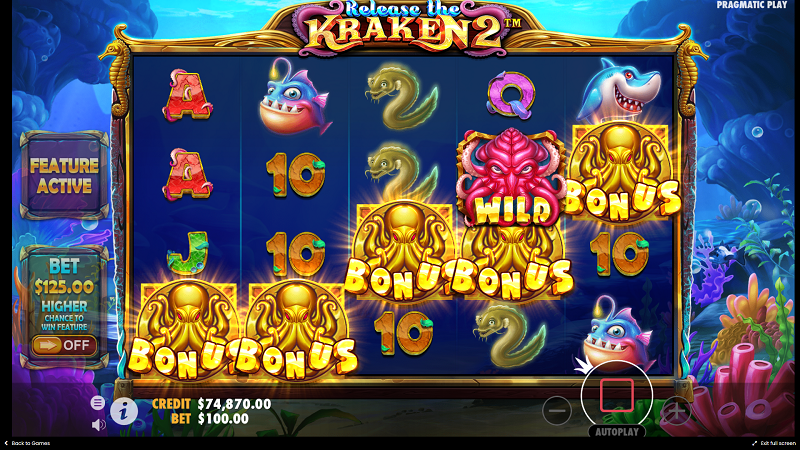 In case you prefer to use the Buy Free Spins feature, you’ll have two alternatives:

They’ll cost you 100x and 250x your bet, respectively. The Gamble feature is valid for both options, too.

Both Wild and Bonus Symbols do not vanish from the reels until the end of the session. They move randomly over the grid on each spin. Every win will increase your Multiplier by one. 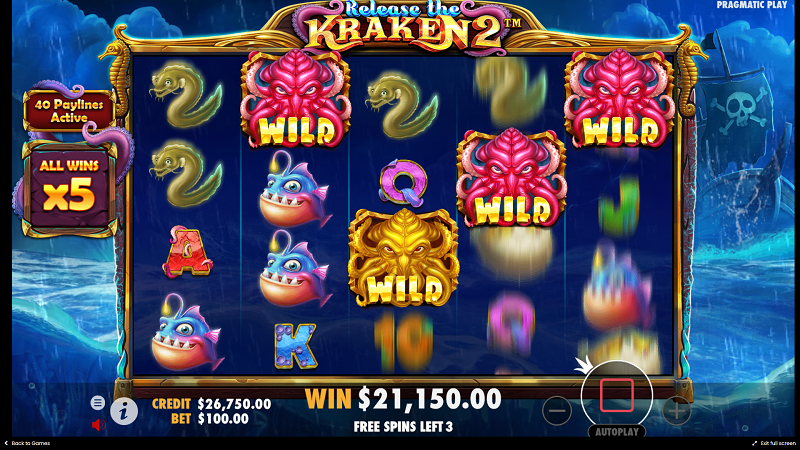 Wish to play the online Release the Kraken 2 slot on the go? Pragmatic Play can offer you seamless mobile gaming, no matter which type of device you use. The game is open for Instant Play via mobile browsers. You can also run it seamlessly on a downloadable app.

Play & Win with Release the Kraken 2

Are you prone to trying the Kraken slot and winning huge in it? Use these hints to improve your odds:

We added the Release the Kraken 2 slot for real money to our top-recommended list of games. The video slot has an engaging design and gameplay. It offers multiple possibilities to win.

What is the RTP of Release the Kraken 2?

Where Can I Play the Demo Release the Kraken 2 Slot?

Play it at any of our recommended casinos or on the provider’s official site.

What Is the Maximum You Can Win on the Release the Kraken 2 Slot by Pragmatic Play?

The highest payout available in the slot is 4,000x of your wager.

How Does the Roaming Wild Feature Work in Release the Kraken 2?

Roaming Wilds are active only during the Bonus session. All Wild Symbols present on the reels do not disappear while the reels are spinning. Moreover, they move around the reels in a random way from spin to spin.

Where Can I Play the Release the Kraken 2 Slot Online?

A licensed Pragmatic Play casino will suit. You can pick your trusted platform from our ratings and thus ensure secure and top-class gambling for you.

Can I Play Release the Kraken 2 on Mobile?

Yes, the Release the Kraken 2 game runs seamlessly on all mobile gadgets.

What Other Games Similar to the Release the Kraken 2 Slot from Pragmatic Play Can I Play?