Rise of Olympus Slot Review – Climb the Mountain of Prizes

Rise of Olympus is a video slot by the reputable gaming company Play’N Go. The game revolves around the theme of Greek mythology with three of the divine brothers, the most powerful gods of Olympus as the main characters of the slot. Zeus, Hades, and Poseidon take the players on a journey through the underworld, the sea, and the sky.

The game comes with 5×5 reels and 5 pay lines. The Rise of Olympus slot has an RTP of 96.50% – which is above the average casino game RTP. This slot of high volatility is available on multiple crypto casinos online so you can play using digital coins, such as Bitcoin. The players are also given the opportunity to play the demo version of the slot in case they wish to only enjoy the game without betting real money on it.

The design and the detail of the game are incredible, as expected from Play’N Go. The game offers multiple bonus features with the inclusion of three types of free spins rounds that you can even retrigger. You can play the Rise of Olympus mobile version with the details of high quality as you would play the game on desktop devices.

A Better Look At Rise of Olympus’ Visual Aspects

The Rise of Olympus game comes with three different locations where the glorious gods await. The reels could be located with Hades, standing on the cliffside with dark skies behind him and the wild sea waves hitting the rocks. The king of the underworld looks exactly like you would expect the ruler of the dead to look, he is dressed in black with silver accessories. 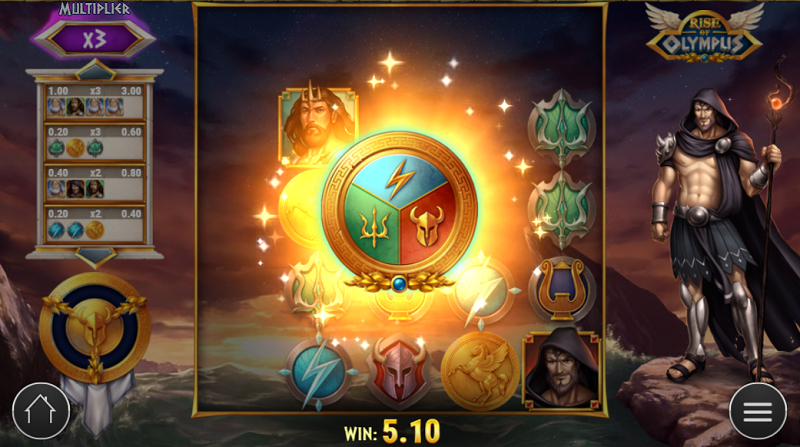 You could move from the world of Hades to the king of the seas – Poseidon – at the bottom of the ocean. This is where you will find Poseidon with his long brown hair and beard, dressed in silver and white, with his famous trident in one hand. The bottom of the ocean is dark and you can see the ruins of ancient cities sunk under the water in the background.

The third location is the location of the god of the skies – Zeus. Rise up to the sky to join the mighty king of gods who stands at the peak of Mount Olympus with his hands crossed watching over the earth beneath. Here you can see the light blue sky and the white clouds vividly.

In case you don’t wish to bet real money on the game just yet, you can easily check out the Rise of Olympus demo version online – you can play the game for free just to enjoy the visual appeal and the aesthetics of the slot. 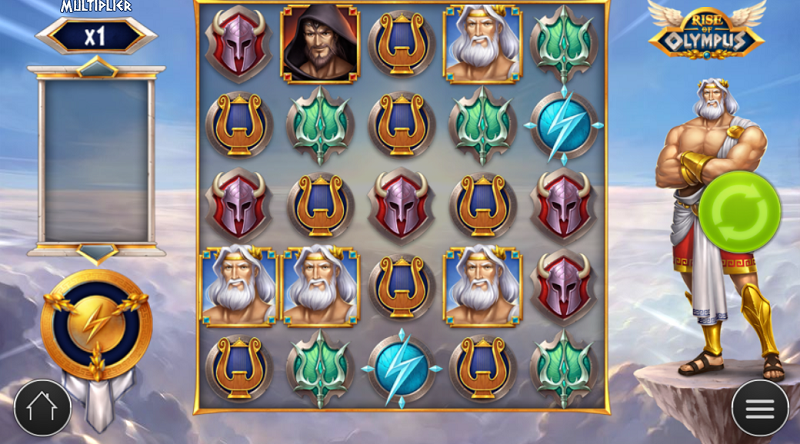 The symbols landing on the reels are also thematically accurate according to the three main gods of Greek mythology. You can see a lightning symbol – representing Zeus, a helmet with horns – representing Hades, and as for the symbols of Poseidon – it is his infamous trident.

Rise of Olympus Audio – How Does It Feel?

The slot comes with tense music to remind you that you are in the presence of the great divine brothers. Zeus – the protector of all humans is always ready to fight those who wish to attack and take away his throne, including his family members. These brothers with many enemies have the tense aura that the background music of the slot defines perfectly.

As for the sound effects, you can hear the kings of the sky, the underworld, and the seas encourage you and boost your ego every now and then with their loud and distinguished voices.

The game is not very different from the typical slots in the sense that you can easily play it by just spinning the reels by hitting one button, however, the game comes with several features if you want to switch it up a bit. When the visuals and the setting of the game change, you might get a little confused, this is why we advise you to follow our Rise of Olympus guide to get to know the game better.

We shall start by explaining the basic features of the game. The slot comes with 5×5 reels with regular and special symbols. You can win up to 5000x by playing Rise of Olympus.

The setting of the reels can change randomly during the non-winning spins – this feature is called the Hand of God and each God gives you different advantages. The location could be the kingdom of Hades – where the player gets one set of symbols transferred into another symbol. When Poseidon is in charge, you could get up to 2 Wild symbols of greed. Zeus has the power to destroy two sets of any symbol. 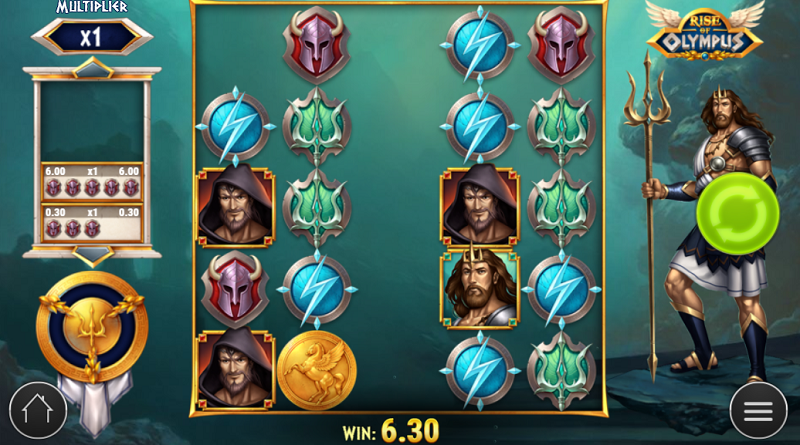 The reels always have a meter on the left side. The meter comes with the symbol of the active god’s special attribute on it. The meter has three sections that you can fill by landing the God symbols.  Fill one section with three god symbols landing at once on the reels, fill 2 of the sections with 4 god symbols and all three of the sections on the meter can be filled with 5 of the god symbols landing at once on the reels. What this does is activate the Rise of Olympus free spins round.

Rise of Olympus Bonus Game At A Glance

To trigger Rise of Olympus free spins round clear the entire greed. You probably expected that the free games come in three different modes – Hades, Zeus, and Poseidon settings. You can choose between the number of free spins. The difference is that fewer spins have a higher risk but come with bigger potential wins.

The Hand of God element is also active in the duration of the free spins round and it’s triggered during each non-winning hit. The multiplier doesn’t get reset and it could go up to 20x. You could get up to 20 free spins by fully chagrin the meter.

You can play the game for cryptocurrencies at crypto casinos, and even play the demo version of the slot for free. Rise of Olympus is available on mobile and desktop platforms with high quality and amazing visuals.

Go on a big journey with the gods of Olympus and rise up to the sky with the help of the divine kings of the underworld, the sea, and the sky.