Silver Bullet Bandit: Cash Collect has been released by a well-known software development provider called Playtech. Are you fascinated with Wild West and want to experience a unique game with tremendous opportunities? Then this is a perfect place for you! As the name implies itself, we are dealing with a western-themed game full of bandits, weapons, cigars, gold, and all the elements related to this culture.

These beautifully depicted characters will certainly remind you of a Western movie where criminals are trying to rob a bank and steal money. The main objective is the same in this game as well since you have to find gold in order to generate large payouts. Impressive graphics and visuals will be noticeable from the very beginning which further enhances the overall gambling experience here! 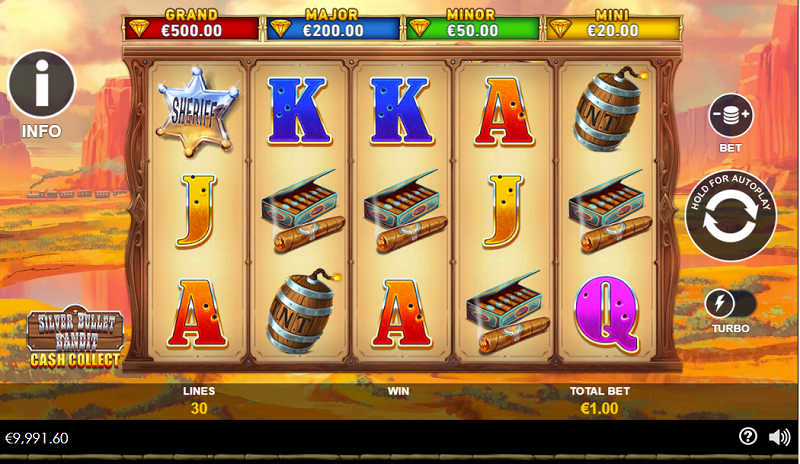 When it comes to the gaming mechanics, we have to say that Silver Bullet Bandit: Cash Collect features decent numbers. The RTP is 95.44% here which is roughly in the average category, and given the fact that this is a highly volatile game, you will have a chance to win huge prizes but don’t expect them very often. The deposit numbers are in the range of 0.10 – 500 EUR giving all kinds of punters an excellent opportunity to gamble here.

The delightful symbols in the slot are placed in a traditional layout containing 5 reels and 3 rows, and you can generate winning combinations in 30 different ways here. Enormous opportunities will come up in the bonus feature where you are able to earn the highest payout of this slot – 5.000x your initial stake! This is a pretty lavish proposal and you have to take advantage of it!

As we have already said, Silver Bullet Bandit: Cash Collect is a western-themed game where you will encounter all the components connected with this culture. Due to the fact that there are a lot of slots with a similar theme, it was necessary to create something new and unique.

The background of this game bears a strong resemblance to a well-known marvelous place called Grand Canyon. You will witness pretty much the same type of rock buildings on both sides. Also, there is a small river or lake in the middle part and an old-looking train is going on its way in the back. As you can tell, every visitor will certainly feel as if they are somewhere in the Western land in the 19th century. 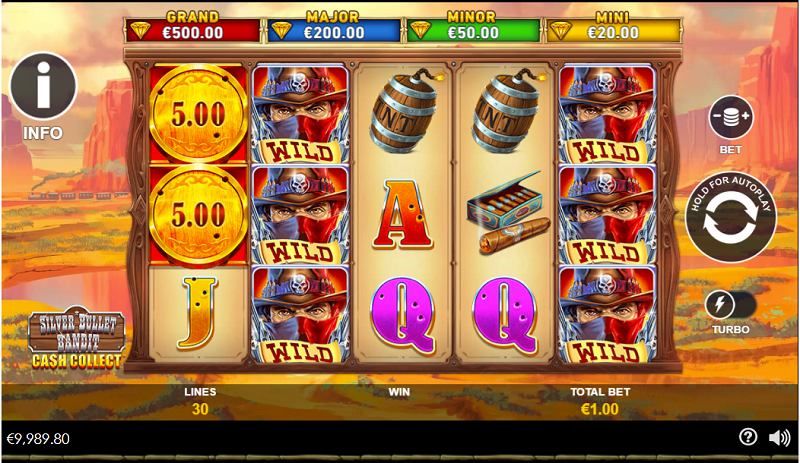 As for the symbols, we have to highlight that they will also remind you of Western customs. The main symbol is depicted as a bandit with a cowboy hat and a gun in his band. Other figures include a sheriff sign, a bag full of gold, cigars, a bottle of Whiskey, and a barrel bomb. All these items are well connected to the main theme of the slot and create eye-catching sightseeing on every spin.

What’s more, every player has the opportunity to enjoy this delightful playing atmosphere even on their smartphones. Given the fact that they are the most popular devices in the world, Playtech developers have established a convenient Silver Bullet Bandit: Cash Collect mobile version to create a suitable playground there.

Silver Bullet Bandit: Cash Collect Audio- How Does It Feel?

The audio of Silver Bullet Bandit: Cash Collect is something unique since it follows the game flow perfectly with pleasing and repetitive sound effects. This music will definitely be familiar to many of you since you might have already heard of it in Western movies. So, there is an excellent combination of the soundtrack and the playing interface that enhance the overall feeling of being somewhere in the Western land hoping to win a lot of money!

In this section, we will teach you how to play Silver Bullet Bandit: Cash Collect. As we have mentioned above, the paylines in this online slot are fixed at 30, so you don’t have to worry about choosing how many you want to play. Every symbol pays different amounts here and the largest win will be provided by a sheriff’s badge icon awarding you 180x more money!

The other symbols include relatively smaller payouts, for instance, a coin sack will give you 120x your bet, cigars will reward you 90x more money and a bottle of whiskey will furnish you with a 75x payout. As for the standard card symbols, they will give you the lowest payouts as usual. 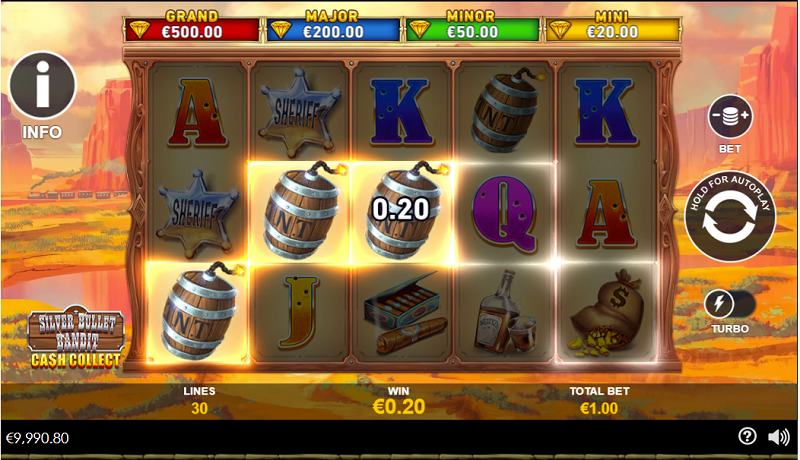 Also, this game has a wild symbol that can replace other icons to help you to create winning combinations. Keep in mind that it can’t replace diamond, cash prize or Cash Collect icons. The Cash Collect symbol will only be visible on the fifth reel in the main game and on every reel in the free spins round. During the base game, one of these symbols will collect all the coin symbols that have landed in that spin including the free game coins, diamond coins, and cash prize icons.

Silver Bullet Bandit: Cash Collect includes a fairly standard bonus game. There are coins offering a displayed number of free spins and cash prizes of between 1x and 15x your total bet in this game and you can collect up to 10 free spins. The coins will be added together in this online slot to reward you with a total win! 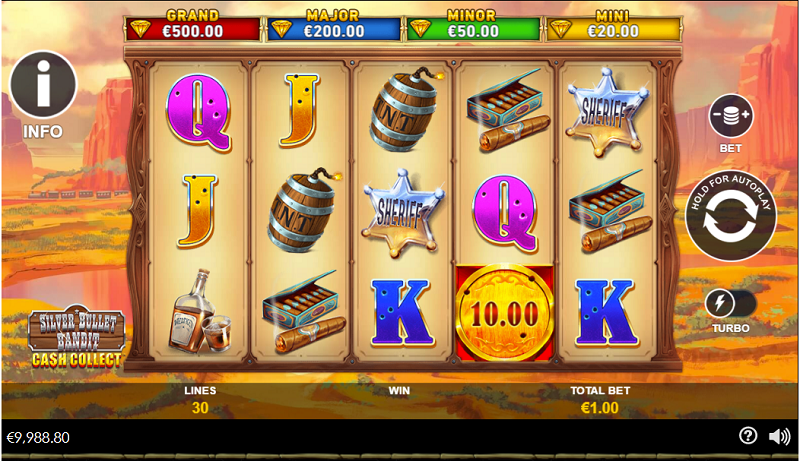 Also, there are four types of jackpots here – mini, minor, major, or grand jackpots. You can win either of them by landing one of the Cash Collect icons in the right place at the same time as landing one of the diamond coins. It is worth noting that the jackpots in this game are fixed and which one you win is selected randomly. You can win the prizes multiple times if you lock in more than one Cash Collect symbol during the free spins bonus.

In this Silver Bullet Bandit: Cash Collect guide, we have provided in-depth information about a well-known slot that was launched by Playtech. This is a western-themed game, so if you are a fan of this culture then tremendous excitement is waiting for you here. The gaming mechanics are as appealing as the visual side and you have a chance to win huge amounts. Most importantly, if you get really lucky, you have the opportunity to generate the highest payout in this game which includes 5.000x your initial bet!