Space Wars 2 Powerpoints is an excellent creation of the industry’s leading software provider called NetEnt. Everything about this slot will be unique for most punters starting from the name itself and as you can see, we are dealing with a space-themed game that includes pretty innovative attributes. Do you want to travel to space and experience gambling with tiny alien-like figures? Then Space Wars 2 is an excellent destination for you!

We would like to write a Space Wars 2 Powerpoints review in order to inform you about the most essential characteristics of this game. It contains a completely different playing interface compared to traditional games and what’s more, there are various innovative ways to generate payouts which we will cover down below.

First of all, we want to highlight that you will come across a playground consisting of 6 reels and 6 rows. As for the paylines, we are seeing a bit of a different structure here since it includes cluster pays, meaning that when you collect at least three of the same symbols on the reels in a horizontal or vertical line, you will be awarded a win. You can start gambling in this game as low as 0.20 EUR and the maximum amount you can reach includes 100 EUR.

Space Wars 2 Powerpoints feature an RTP of 96.05% which is considered slightly above average, so the slot will return you high amounts on average. Also, given the fact that this is a highly volatile game, players can generate huge prizes but keep in mind that they will not come very often. However, if it is your lucky day, you might as well earn the highest payout here which is an astonishing number – 10.020x your initial bet! This is obviously a pretty generous offer that very few slots can compare in the whole gambling world.

As we have said, Space Wars 2 Powerpoints feature a unique playing interface that you will not see in the majority of games today. We would like to start by saying that every symbol has an animated effect here and you will come across small alien-like creatures on the reels. Besides, there is a red-colored diamond icon and keep in mind that traditional card figures are not presented here.

As the name suggests, the background of this slot includes a picture of space where there are several planets and asteroids. Right above the main playing area, you will see some kind of spacecraft that makes an impression as if you are traveling in space along with the inhabitants. Also, in this part, there is a table of multipliers that shows how much money you have generated on a certain spin. 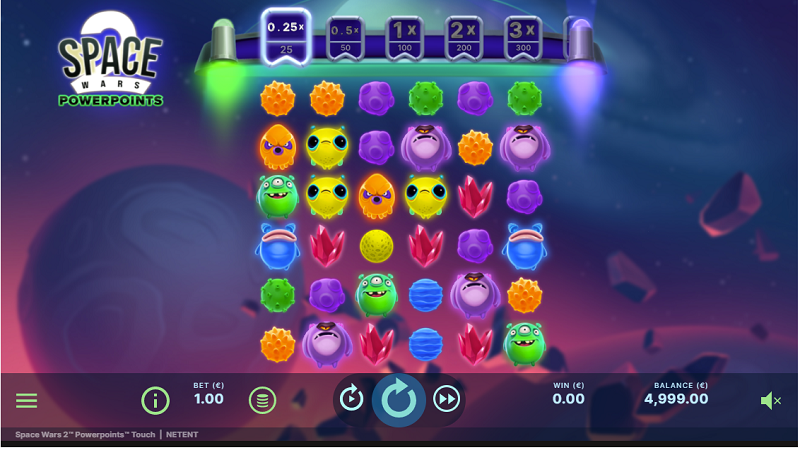 The betting area is located on the bottom side of the screen as usual, and you can start playing by pressing a circle button with an arrow in it. As you can tell, Space Wars 2 Powerpoints contain a simple yet appealing design that makes an eye-catching effect as you spin the reels.

What’s more, the creators at NetEnt have established a Space Wars 2 Powerpoints mobile version that provides the same high-class attributes. This is because smartphones are the most frequently used devices in today’s world and it is crucial to create a suitable playground for them.

Space Wars 2 Powerpoints Audio – How Does It Feel?

The audio of Space Wars 2 Powerpoints is as simple and pleasing as the design itself. This is a very important factor as well since if the soundtrack is boring and uneasy then players will easily lose interest in the game. So, the developers have created ear-catching repetitive sound effects for Space Wars 2 Powerpoints in order to make your time enjoyable and memorable here.

We are going to teach you how to play Space Wars 2 Powerpoints and generate payouts. There are all sorts of unique features here that provide great possibilities in the main game as well as a bonus round. We want to start with the column/row blaster that is awarded when you collect a 4-symbol horizontal winning line and it will remove every symbol from the row and add powerpoints to the meter. 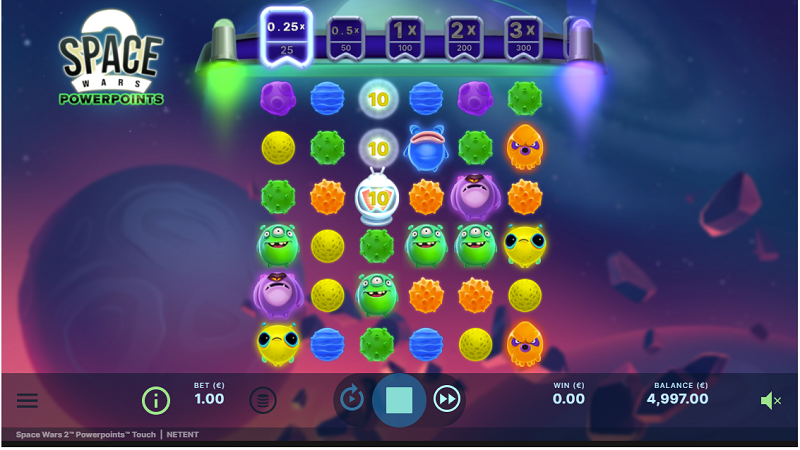 The Bomb feature appears as soon as you collect a winning line containing horizontal and vertical matching symbols. Then it will explode and remove every symbol in order to add points to the Powerpoints meter. In case it is presented with a multiplier wild, it will multiply the number of received Powerpoints.

As for the wild&multipliers wild feature, it can be unlocked in one of the empty positions when you collect a 3-symbol match in the main game. During the free spins round wild symbols will include a multiplier of x2, x3, x4, x5, x10, or x25, so they will multiply the number of generated Powerpoints.

The bonus game of Space Wars 2 Powerpoints includes free spins that can be triggered when you collect at least 1,000 Powerpoints. During the free spins round, the layout will grow up to 8 rows high, and players have the opportunity to trigger more free spins in this feature. 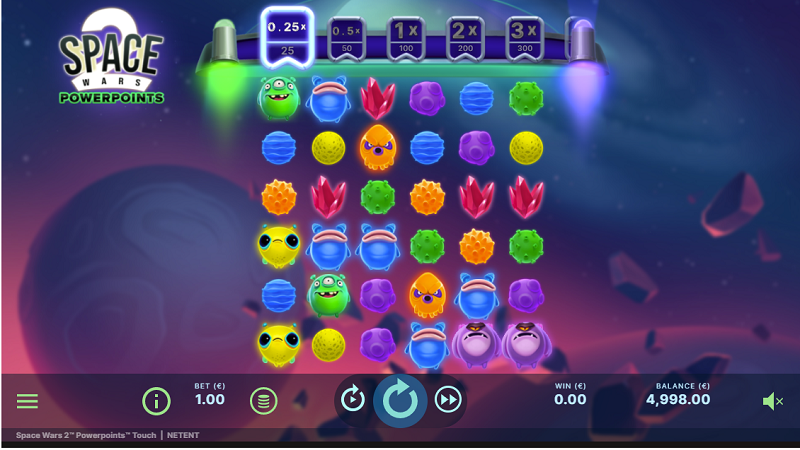 In this Space Wars 2 Powerpoints guide, we have reviewed all the attributes of a popular slot that was created by the industry’s leading software provider called Netent. This is a space-themed game that will certainly take you on a journey to space along with alien-like creatures in a spacecraft. Moreover, there are huge opportunities to win a lot of money with the help of various innovative features both in the main game as well as a bonus round!