Tomb of Akhenaten is the latest slot release from Nolimit City, and it makes us see that the software company returns to Ancient Egypt theme, following in the footsteps of one of their earlier releases, Tomb of Nefertiti. Tomb of Akhenaten has considerably more win-potential, volatility, and inventiveness, and the game was obviously created with top-tier visuals and animations. 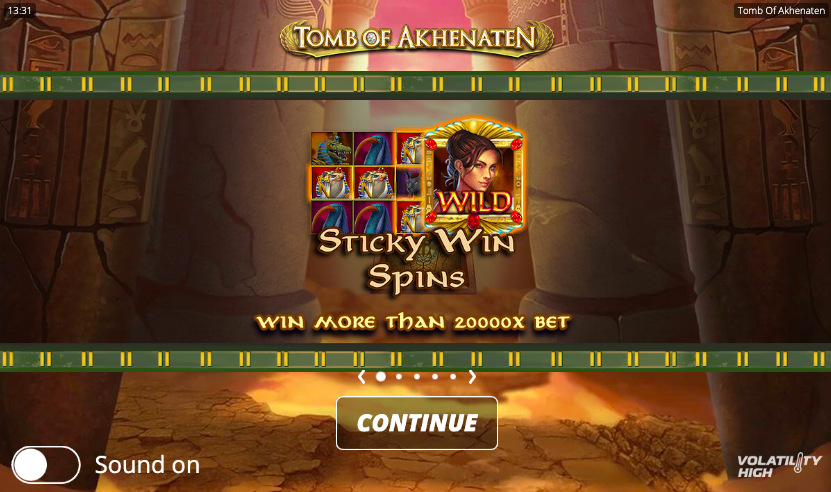 Played with a basic configuration of 5 reels and 243 win ways, each new spin begins with 3 rows and grows when winnings occur. There is a connection between the two Tomb games in terms of graphics quality and symbol display, but they differ in other ways. As for RTP, the Nolimit City slot has 96.09 percent by default. However, as with all of Nolimit City’s slots, Tomb of Akhenaten is available in a number of RTP settings, therefore the game may be available at different RTPs at different online casinos.

The game comes with super high volatility and it compensates with large potential gains. The maximum win for each spin is 26,000 times your entire stake. Because of the rising multiplier, the greater winnings will occur in the Akhenaten Spins. The game itself has a volatility rating of 9/10 on the game developer’s own scale. Spins, wins, expanding rows, and wild multipliers are just some of the extras you may get when you play this slot machine. We are going to review them in more depth during the review, so make sure to check them out!

A Better Look at Tomb of Akhenaten’s Design Aspects

When it comes to the audio and graphics of the Nolimit City slot game, nothing beats what’s on offer there. The visuals are vibrant, colorful, and crammed with elaborate details in every direction. It’s based on Akhenaten, the Egyptian pharaoh who married Nefertiti and had Tutankhamun as a child. 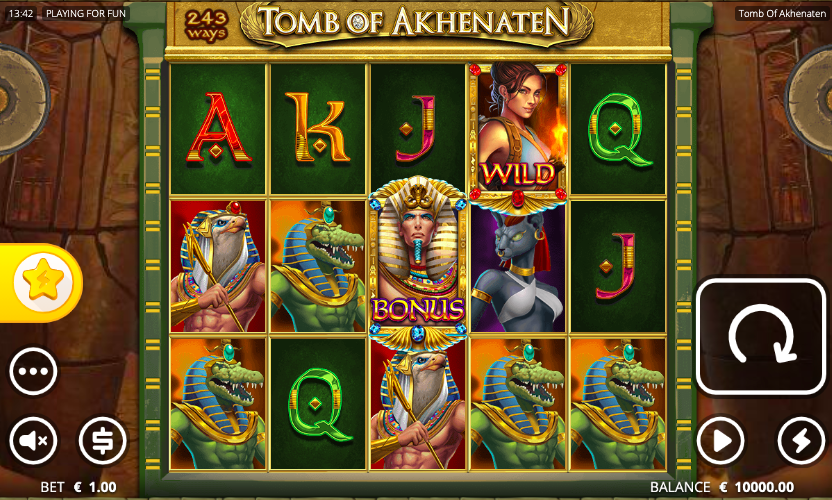 The game is a continuation of the Tomb of Nefertiti slot machine. While you spin, you’ll be accompanied by a spooky and slightly creepy background tune. Each time the reels expand, you’ll hear a loud thud. Exploring this old pyramid will provide you with lots of exciting atmospheres. The reels are surrounded by hieroglyphic-etched pillars. During the gameplay, you will be able to discover Egyptian animal gods, A to 10 royals, and a bunch of wild and bonus symbols.

Tomb of Akhenaten’s rich graphics may be found on mobile and tablet devices, as well as in the game’s larger screen desktop mode. Even on a smartphone or tablet, the expanding reels are responsive and fun to play – It is also important to note that Tomb of Akhenaten is Nolimit City’s third mobile hit, and this one definitely does not disappoint. All in all, it is clear to see that every aspect of the design is thoroughly thought by the software developer so players never get bored when playing this particular slot. 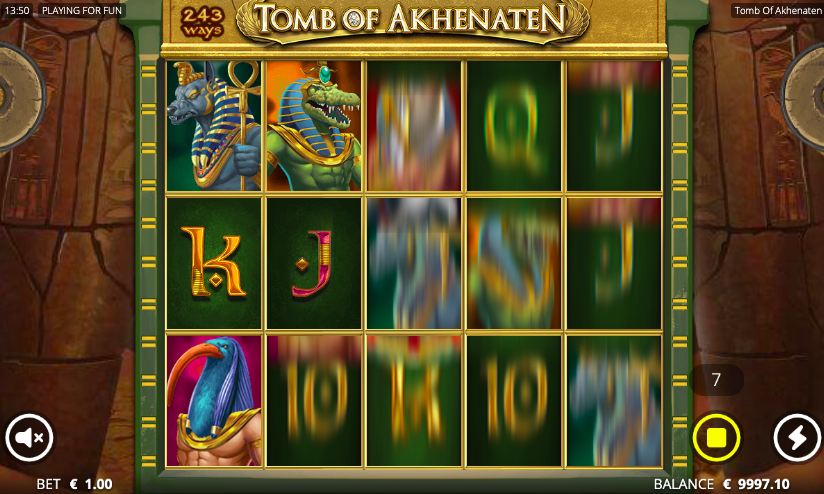 Tomb of Akhenaten Audio – How does it feel?

Sound has a significant impact while playing an online slot, which in turn affects players’ arousal levels and stress responses. We feel that the player’s performance is influenced by the usage of music as positive reinforcement. That’s probably the main reason why Nolimit City has chosen a very good soundtrack – While playing this slot, some of Egypt’s most powerful gods appear on the dynamic reels with the Pharaoh and the main music theme is dominated by ancient drums. The soundtrack makes the whole gameplay of Tomb of Akhenaten much more exciting and interesting. So when you hit a big win, reward and audio will perfectly complement each other. 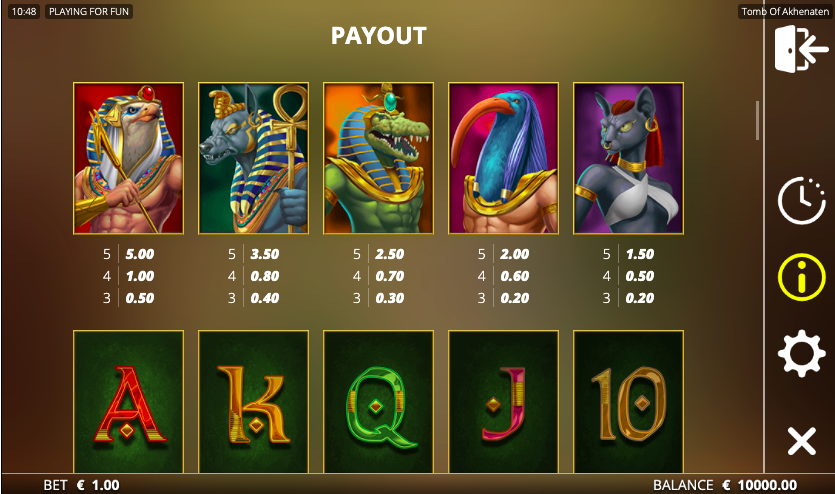 The core of Tomb of Akhenaten’s gameplay revolves around the Sticky Win Spins feature, which appears in both the regular game and the bonus round. Wilds and Nolimit City Free Spins, along with bonus buy are all based on this mechanism. Sticky Win Spins are triggered by any win. The initial respin expands the grid by one row, bringing the total number of winning ways up to 1,024. Another row is added if the winnings are enhanced, increasing the total number of winning ways to 3,125. 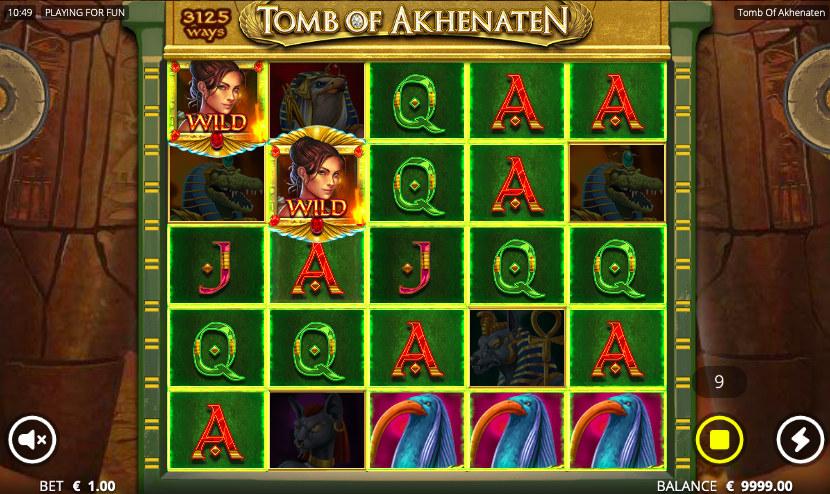 When rows are added to the reels during expansions, random symbols may turn wild. During the third respin, there are chances of Pyramid wilds appearing on the reels. All of the lower-paying symbols on that reel will go wild, and if there is already a wild symbol visible, it becomes a 2X wild.

Tomb of Akhenaten Bonus Game At A Glance 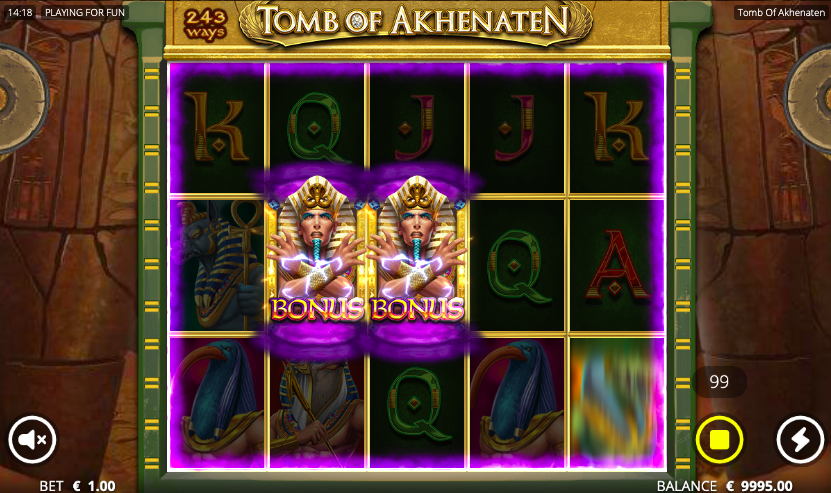 The Sticky Win Spins feature, just as in the regular game, is active during the free spins. They also come with a little something more. A multiplier grows by one every time you land a Sticky Win Spin. It also does not reset at the conclusion of the respins; it continues to rise throughout the feature. Each bonus symbol that appears during the Akhenaten Spins adds one more free spin to your total. Sounds exciting, right?

One of the most unique features that the Tomb of Akhenaten comes with is called “Bonus Buy”. If you don’t want to waste time playing the main game, you may use this mechanic to immediately enter the bonus round. There are two ways to do so:

It is important to keep in mind that the Bonus Buy option is not available to players in the UK owing to rules implemented last year by the UK Gambling Commission (also known as UKGC). 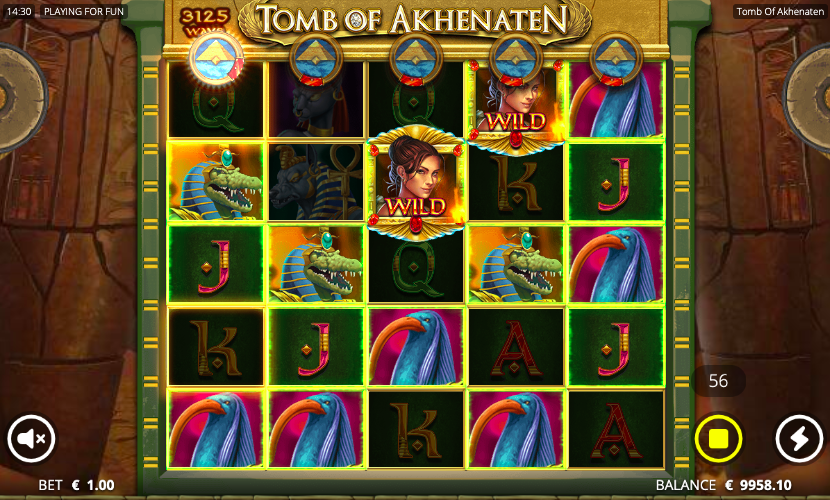 All in all, Tomb of Akhenaten is another well-crafted Nolimit slot with a refreshing amount of unique aspects that set it out in a pretty crowded category.