Triple X Hot Pepper is one of the brand new video slot games from Belatra Games – a popular software developer that operates very successfully in the gaming industry.  This is a type of classic slot machine which is based on a colorful design and includes several classic bonus features. Triple X Hot Pepper is a pretty simple game and anyone can try it without any barrier.

The structure is very simple and it is one of the greatest options for new users who have less knowledge or experience in gaming. For the already experienced users, Triple X Hot Pepper is perfect because it suggests several types of multipliers which increases the amount of winning. It is important to mention that the game itself is not special with the higher payouts compared to other slot games. Triple X Hot Pepper is oriented to create minimal risk during the game so the number of winnings is not huge but consists of a significant number of payouts. 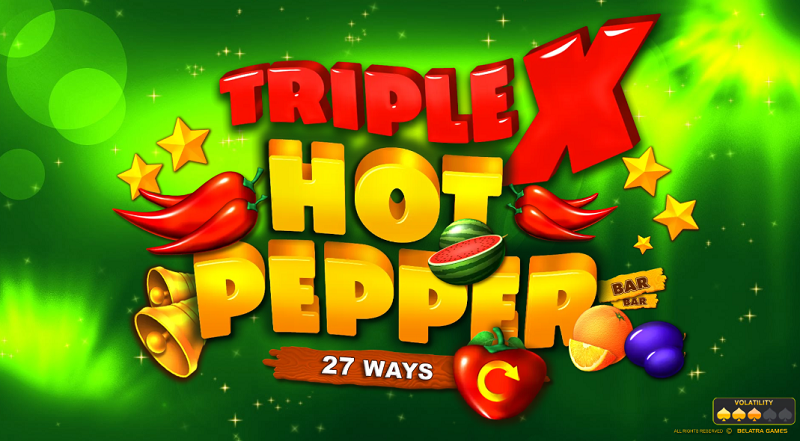 Triple X Hot Pepper real money offers the players to bet the minimum amount of 0.2 USD, while the maximum betting limit is 250 USD. The maximum payout a player can get is x168 of the initial stake. This means that the user placing the maximum amount of bet has a chance to win over 40 000 USD, which is a pretty good prize.

Triple X Hot Pepper itself has 3 reels and 3 rows. That means the main principle is to match three identical symbols on the reel, no matter their direction. The game has a pretty simple structure and compared to this, quite a high number of winning ways. More specifically, Triple X Hot Pepper has 27 paylines in total which one more time outlines how anyone has a big chance to win money via this game.

Even though the slot game is a brand new release, the Triple X Hot Pepper mobile version is available for any kind of device user. The team of the game creators are using the technology of JS and HTML5 which provides complete access from any device. The slot game does not have a separate app but any user can play this great game from its browser with a desktop, mobile, or tablet device.

We should mention the great level of RTP for that game. More specifically, the RTP for Triple X Hot Pepper is 96.03%, which is over the gold standard of the average RTP ratio. With the level of volatility, the game comes with minimal risks and realistically increases the winning chances.

For those who want to try this colorful and fun video slot game from Belatra Games without real playing, the Triple X Hot Pepper demo version is available. This is a great way to find out more specifics about the game and at least learn how to play Triple X Hot Pepper effectively.

During the Triple X Hot Pepper guide, we will describe the main aspects of the slot game with bonus features, the winning mechanics, and graphic designs.

The Triple X Hot Pepper design is pretty similar to the classic slot machines design style. It is oriented to create positive and fun emotions during the play. Everything included symbols, settings, visuals, logo and the background is inspired by fun and diverse colors. So if you want to play in a positive online atmosphere, Triple X Hot Pepper is for you.

We have to mention the quality of the graphic design. The designer team was not oriented to creating a realistic or 3D animated style. Their mission and aim were to create a more positive and impressive atmosphere as possible. So the game design is not realistic and includes the animated style, with the high-quality visuals and elements.

Triple X Hot Pepper’s simple design is full of colors but the main ones are red and green. Because the main symbol is red pepper, the colors are relevant to these. The beginning background is neon green with magical lights and a colorful, fun title. When the user starts playing the background stays the same and the playboard is more minimalistic. The dark green board with golden frames and the neon green flashing lights create a very positive emotion during the gaming. The settings section and paytable are illustrated on the red board with the minimalist design of symbols and texts. 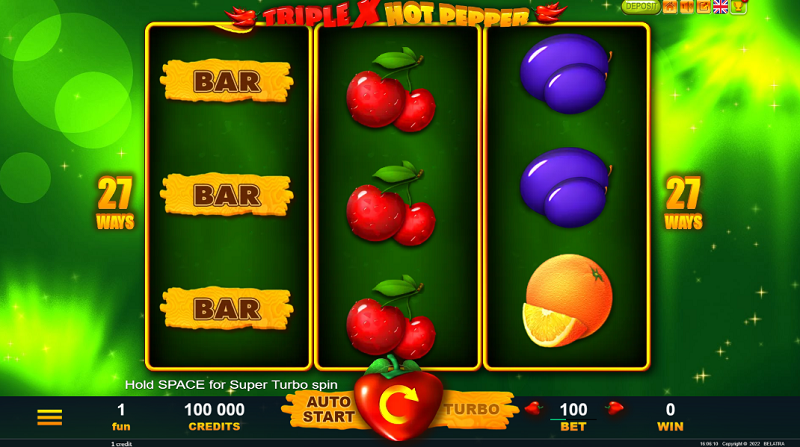 When it comes to symbols, we can see classic slot machines symbols which include different fruits, vegetables, bells, numbers, and others. More specifically, the game symbols are peppers, orange, plum, cherries, lemon, triple seven, and golden bells with the board. All in total creates an exciting gaming atmosphere that every player will enjoy.

Triple X Hot Pepper Audio – How Does It Feel?

When it comes to the audio, Triple X Hot Pepper creates a fun and positive gaming atmosphere. In general, the audio effects and the soundtrack plays a significant role and creates excitement. In order to create an engaging playing environment, it is important to set the minimalistic and positive music which won’t become a barrier to concentration.

Triple X Hot Pepper team successfully did it because the audio of the game is completely relevant to the fun and colorful atmosphere that graphic design creates. While playing, you can enjoy positive quick notes from the game with the dynamic rhythm. Players can go to settings and control the volume or even mute the sound and continue playing more calmly.

As we mentioned before, the game is a 5×3 type slot machine and includes 27 paylines in total. With the high frequency of winning rewards and bonuses, the game includes 7 different symbols which is the way of earning pretty high, different multipliers. For winning, you need to match at least three of the same symbols on the board. The slot game generates symbols randomly so there is no specific strategy or formula to win easily, but the bonus features and number of paylines are increasing the probability of winning significantly.

The lowest paying symbols are orange and berry. Matching three of them on the reel will bring you an x2 multiplier of your total stake. There are also medium paying symbols which include lemon, watermelon, and triple seven symbols. If a player lends at least three lemons or watermelons, the winning will increase by 16x of the total stake. Whereas if landed triple seven symbols on the reel, the player will get an x20 multiplier. 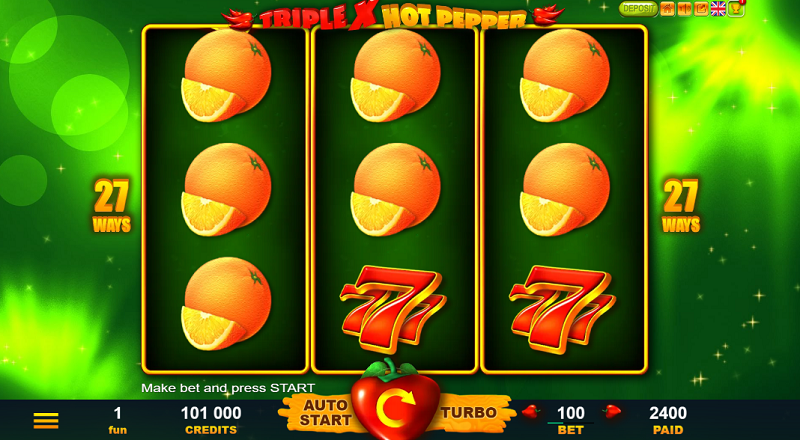 As we described before, Triple X Hot Pepper suggests to the player several multipliers which are activated after matching the three identical symbols on the reel. The multipliers are from x2 to x60 of the total stake, where the highest paying symbol is hot chili peppers.

On the other hand, the game has an x2 multiplier option which will be activated after filing the entire bonuses from identical symbols. Already collected bonuses will be doubled and players can win a pretty high amount of money. This is a Triple X Hot Pepper progressive bonus jackpot feature.

Triple X Hot Pepper free spins are not included in the bonus system but that is not a big disadvantage. The game is fully oriented to maximize the amount of winning. This is why each symbol has quite a big amount of multiplier which can be increased twice after a bonus wheel jackpot option.

Despite the fact that Triple X Hot Pepper is a brand new slot game, it already is very popular among users. In general, the game is a classic slot machine but still has unique features. Firstly, this is outlined with the great and high-quality graphic design which brings more fun, positive, and excitement during the playing.

On the other hand, the great bonus features which offer the multiplier award on every step of the playing creates a very increasing chance of winning and any kind of player no matter the experience has a realistic chance to win a high amount of reward. So, if you are looking for a fun gaming experience with jackpot opportunities, Triple X Hot Pepper is for you!