The main difference between Wolf Fang – Iron Wolf and other slot games is the graphic design and its concentration to make a highly realistic gaming atmosphere for every kind of user. This brings more excitement and adventure to the gaming process which creates an unforgettable experience. 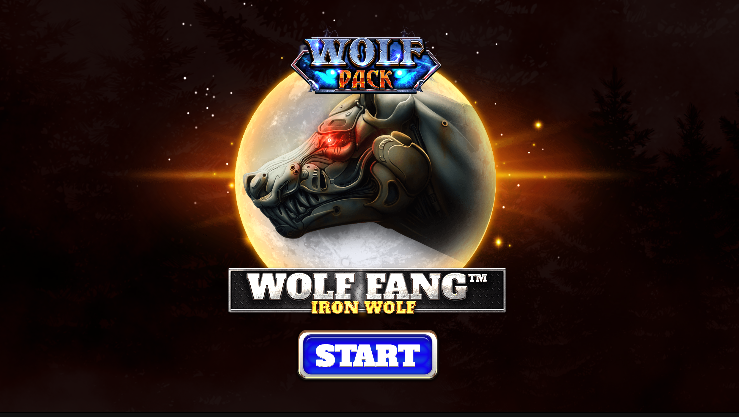 The game includes 3 rows and 5 reels in total with the 30 different ways of winning. We have to mention that the number of paylines is pretty great because it outlines how realistic is the chance to win. This is very important for those who have less experience and knowledge in gaming and try to enjoy the game with a higher chance of luck and winning. Wolf Fang – Iron Wolf can be considered as one of the slot games which is fully oriented to the user. The main priority is to create a comfortable and convenient gaming space where the player has control over the setting features.

Similar to other video slot games, the main principle of the game is to match and collect the same symbols on each reel. In the game, you can find different symbols which offer different bonuses to players. So the amount of winning depends on the number and the type of collected and matched symbols.

With the graphics and bonuses, the Wolf Fang – Iron Wolf is special with a high level of RTP and a medium level of volatility. The RTP ratio for that game equals 96.15%. We have to mention that this level is over the average level which can be considered a great advantage for the game.

As we mentioned, Wolf Fang – Iron Wolf is special with its graphic designs which bring extra adventure and a realistic atmosphere for users. The inspiration for the theme is already outlined in the title and is about wolves. When a user starts playing, the traveling into the mystic and scary adventure already begins.

The main background of the slot game is a dark and foggy forest with a mystic view. The playboard is designed with golden and electric red colors which outline the power and strength of the game space. As in every classic video slot game, in Wolf Fang – Iron Wolf different symbols mean different features. The main symbol is the wolf which is a wild symbol. So this is the way to earn bonus rewards and multiply the number of stakes. The full moon symbol is a scatter. 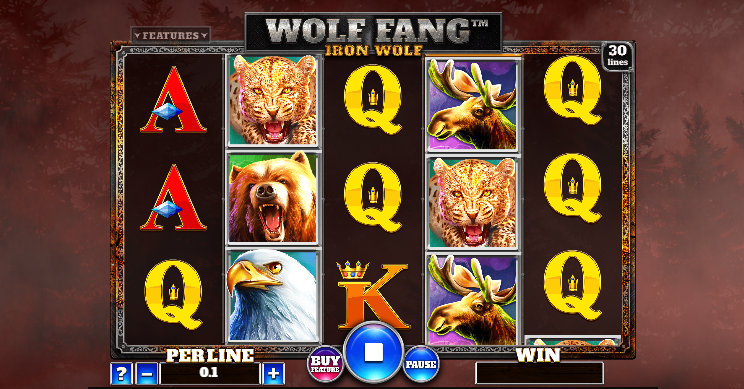 There are other symbols with different bonus offers but with the lower payouts or number of free spins, so they are called lower-paying symbols. This list includes tiger, bear, and eagle symbols. The game also includes classic symbols such as letters and numbers which have the lowest-paying bonuses.

In total, graphics are less animated and oriented to create a 3D realistic atmosphere. The settings are personalized to the user’s comfort. Players can control spin speed and sound modes.

Wolf Fang – Iron Wolf Audio  – How Does It Feel?

In general, video slot games are oriented to create one theme atmosphere during the gaming process to bring more excitement and motivate users to keep playing. Along with graphic designs, sound plays an important role in creating a comfortable gaming space. First of all, it should be connected to the inspiration theme and should not be too busy or loud to not be a barrier to users’ concentration. Wolf Fang – Iron Wolf sound is a great fit for its graphic designs and visual effects.

The minimal and smooth sound creates an exciting gaming atmosphere. It merges the foggy dark forest perfectly and creates an impressive and unforgettable emotional atmosphere for every user.

The main point during the playing is to match the same symbols on each reel. The bonuses will be activated if the user collects at least three same characters on the same reel, no matter horizontally or vertically.

Selecting the amounts of bets can be done from the arrow buttons. The game shows separately per line bets and the total number of bets down below the screen. Users should control the amount of total bet and only after that start playing. After pressing the spin button, the magical gaming adventure will begin. The amount of the payout will be depending on the number and type of matched symbols. As we already mentioned, a wolf symbol has the highest payout and the lowest are letters and numbers.

Wolf Fang – Iron Wolf bonus features make the game special because it creates equally realistic chances for those who are new to gaming and for those who have already some experience. The diversity of bonuses at every step of the game is a great motivator for every player. The features include several multipliers, free spins, bonus rounds, and others. Also, we have to mention that the payouts are pretty high which with the high level of RTP brings more chances of winning. 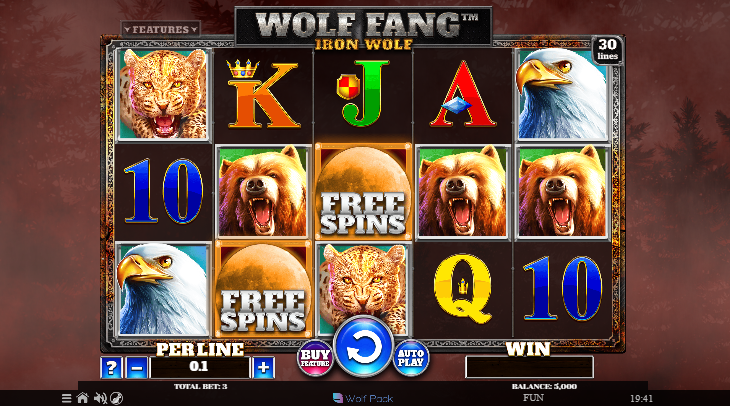 When it comes to betting sizes, every player must know that for each line the minimum bet size is 1 coin so in total 30 coins. With the maximum, it equals 30 000 coins which are 1 000 coins for each line. Wolf Fang – Iron Wolf real money is available for players in different casinos, so you can start playing straight away.

The game also offers free spin bonus features where you need to collect at least three scatter symbols. Wolf Fang – Iron Wolf free spins are two types. Players can choose between getting 20 free spins by paying 1×2 or 10 free spins with medium stacked symbols with 1×3. Frankly speaking, the second choice, with 10 free spins has a higher level of volatility but also has a higher payout too.

Wolf Fang – Iron Wolf slot machine is a great game for those who want to experience the magic and realistic gaming journey and diverse bonus features at the same time. With the visual effects, we can truly say that Wolf Fang – Iron Wolf is very special with high-quality and realistic graphic designs. On the other hand, the game offers you several bonuses with pretty decent amounts. Free spins availability and several multipliers are creating a great chance for everyone because it includes a high payout reward possibility.

We have to mention the high RTP of 96.15%, which is another fact that proves the fewer risks of losses. So in general, Wolf Fang – Iron Wolf free spins and bonuses create a realistic chance of big winning for everyone that gives this game a try.