Bomb Squad is a unique-themed game that was released in January 2020. The game was launched by one of the most popular and prestigious game providers called Evoplay. The company is well-known for its unique themes and great possibility of winning.

The game is video slot type one but with a pretty different structure. Without reels and rows, the player should deactivate the bomb. You can choose between 6 wires or use the random option. If the bomb is deactivated, the wire will light the green. If you lose, the bomb lights will be red. This process is quite adventurous and interesting which keeps players attached.

The RTP level for Bomb Squad is 96.00%. We have to mention that it exactly equals the average level of RTP. According to this ratio, the user will get 96 USD back on average with the 100 USD bet amount. The game has a low volatility level. The minimum betting requirement is 0.1 USD and the maximum equals 100 USD. The maximum amount of payout is pretty low and equals x3 of the stake. This means that by this game you can win  300 USD. 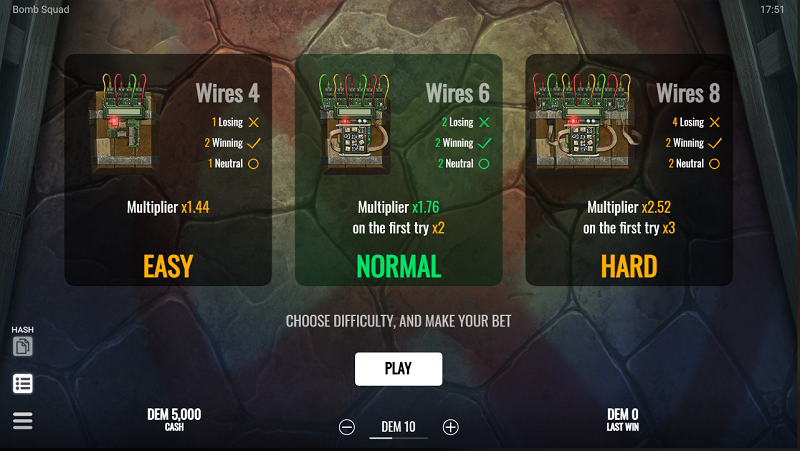 Evolplay as one of the top game provider companies uses high technologies to increase the availability of the games. This slot is not an exception and Bomb Squad mobile is available for every type of device user, no matter will it be desktop, tablet, or smartphone. Also, you can play Bomb Squad for real money on most online casino websites and enjoy this extreme adventure.

During the Bomb Squad guide, we will outline the key aspects of the game which will help you to learn more about the game bonuses, mechanisms, and how to play Bomb Squad, in general.

Because the slot game has a different structure and rules, the design is unique too. The quality of the visuals is impressive and pretty realistic. During the playing, the 3D view creates a very realistic view where you feel like you are the one who deactivates the bomb. 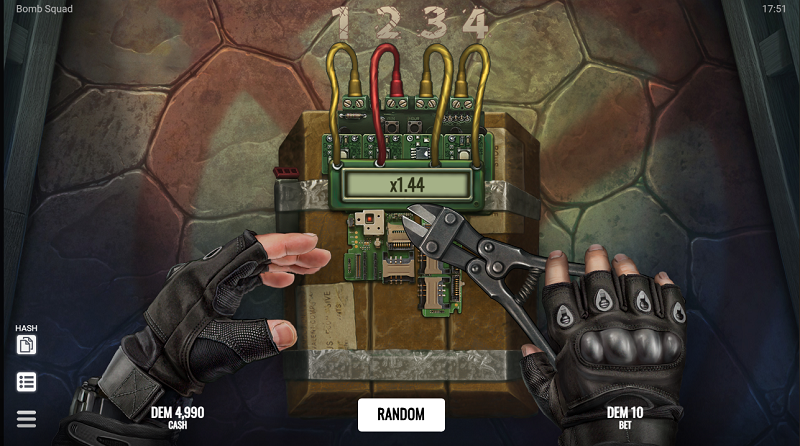 During the play, all you see is the huge bomb put on the stony table with many wires and buttons. On the bomb screen, there are some numbers written that show the multiplier amount in the winning occasion. While playing, you are looking at the hands with gloves and a special knife. From the view, you feel like you are cutting the wires which brings more excitement during the game. There are no other decorated buttons and pages. The design is minimalistic and simple.

Bomb Squad Audio –  How Does It Feel?

The game is oriented to maximize the extreme and realistic feelings of gamers. The process which decides whether you will be alive or not sounds very risky but interesting too. During the game, you feel more excited with the low rhythms and dangerous music sounds which are completely relevant to the game theme.

As we mentioned before, the game rules are unique and very different. All you have to do is neutralize the bomb. The player chooses which wire should be cut but it is also available to choose the wire randomly. 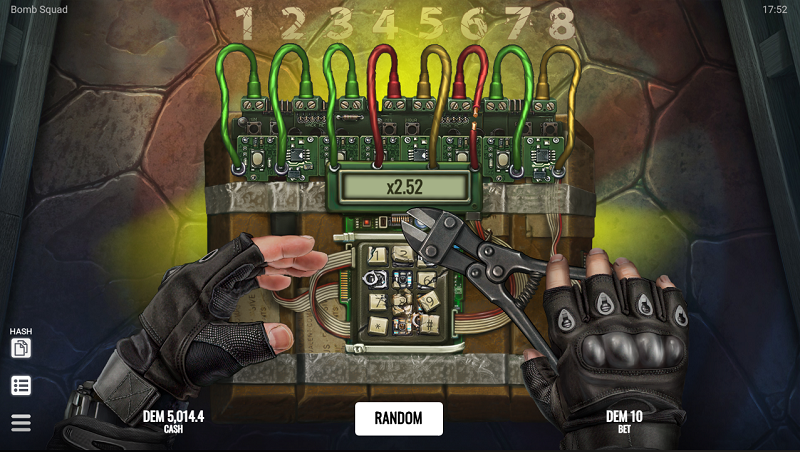 Bomb Squad offers three different levels: simple, normal, and hard.  The easy level includes 4 wires. The medium difficulty includes 6 wires while the hardest level includes 8 wires. To cut the wire, you just have to click on the wire or the ‘Random’ button. After placing the bet from 0.10 USD to 500 USD, you can choose the difficulty level and start the game.

The losing possibilities without blowing the bomb, winning amounts, and neutral numbers are depending on the difficulty level. More specifically, if you are playing the easy level, you have 1 losing, 2 winning, and 1 neutral possibility. During the 6 wire-level, you have 2 losing, 2 winning, and 2 neutral options. With the hardest level, there are 4 possible losings, 2 winnings, and 2 neutral possibilities.

If you do not want to take a risk and try this game without registration or placing the bet, Bomb Squad demo mode is available on most casino web pages. So you can play this game risk-free too.

Since the Bomb Squad has a unique structure and different gaming rules too, there is no available bonus feature at all. All you have during the gaming is different levels and different multipliers. So, there are no Bomb Squad free spins, bonus rounds, bonus buy, or wild and scatters. Even though the bonuses are not very diverse, Bomb Squad gives you a great chance to win a high number of winnings. 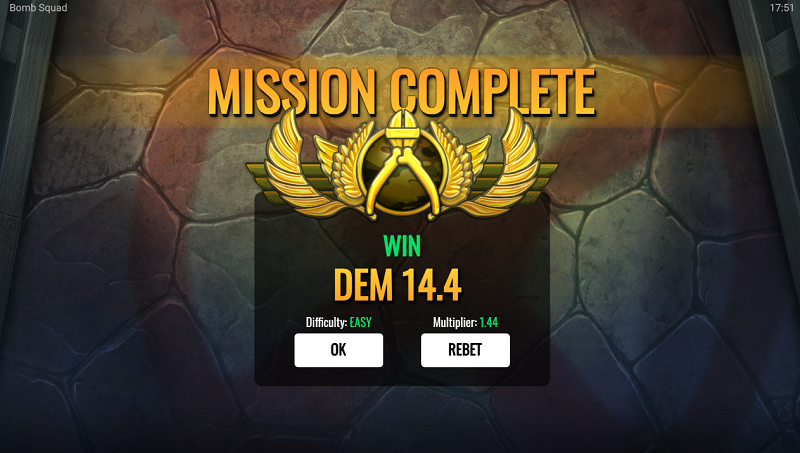 Bomb Squad is a great game for those who want to explore the most different and extremely impressive gaming adventure ever. The perfect visuals, dangerous and impressive soundtrack, and unique rules make the gaming process interesting.

During the play, you feel like the main character. The feeling that the bomb’s deactivation is depending on your intuition, brings excitement and dynamic extreme. So, if you are looking for an unforgettable gaming experience, Bomb Squad is the best game for you!