If your childhood dream was to become an old civilizations explorer, Cat Wilde and the Pyramids of Dead is the perfect slot for you! This is your ticket to feel like the main character and become the explorer woman who is following the footsteps of one of the most ancient civilizations.

Created by Play’n GO, the slot comes with high-quality animations and brings extra excitement to the gameplay. If you love challenges and new experiences, keep reading our Cat Wilde and the Pyramids of Dead guide and find out more!

The maximum payout you can get is x10 000 of your total placed bet. To start enjoying this magical adventure, you should place a bet with the minimum amount of 0.01 USD or the maximum amount of 100 USD. The games’ volatility level is medium whereas RTP is high and changes within the bonus features. The RTP for Cat Wilde and the Pyramids of Dead equals 96.20%. 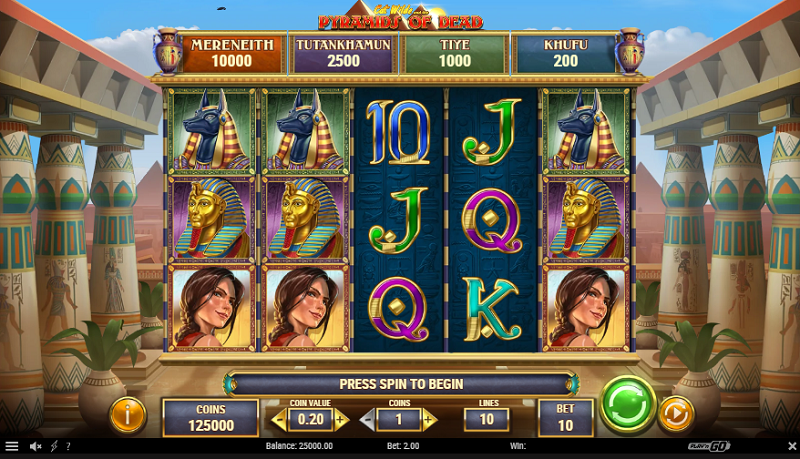 The good news is that Play’n’ GO uses advanced technologies such as HTML5. This means that Cat Wilde and the Pyramids of Dead mobile mode is available for every type of device user including tablets, desktops, or smartphones.

The game has a quite unique and adventurous storyline around the main character who is a young woman explorer. This archeologist tries to find the ancient treasure in Egypt. So, while playing you will be impressed with the changeable backgrounds, impressive Egyptian buildings, temples, pyramids, and landscapes.

In the background of the game, you can see the beautiful view of the main golden pyramid. Next to the pyramid is the palace yard with giant column rows which are painted with different Egyptian hieroglyphs and paintings. Depending on the activated bonus feature, the daylight landscape changes into a night view and the atmosphere becomes more magical. If you are playing the bonus round, you are moving into the pyramid temple, in the dark cave with the goddess statues.

The playboard is designed simply. The semi-transparent board is painted with different hieroglyphs and creates a mystical aesthetic. The symbols are relevant to the theme. Even the regular letters and numbers are golden framed and designed perfectly. With the special symbols, you will play with golden pyramids, golden bugs, amazing statues of Anubis, main character symbols, and others.

Cat Wilde and the Pyramids of Dead Audio – How Does It Feel?

If you ever watched a movie about an adventurous journey in Egypt then you know the association with the Cat Wilde and the Pyramids of Dead audio effects. This is a perfectly merged soundtrack to the storyline of the game which brings more excitement with its low rhythms and calm classical Egyptian music.

Cat Wilde and the Pyramids of Dead Game Mechanics Explained

Cat Wilde and the Pyramids of Dead is a 5×3 structured game. Your winning amount depends on what type of symbol you will match on the reel.

Similar to the other slots, letters and numbers in Cat Wilde and the Pyramids of Dead are the lowest paying symbols. After landing three of them, your winning increases from x3 to x4, whereas after matching 5 of the letters or numbers, your winning goes up from x60 to x80. As you can see, the payouts for low-paying symbols are quite high compared to other slots, which is another advantage of the game. Golden bugs, a statue of Anubis, and the well-known golden mask of Tutankhamun are medium-paying symbols. They are increasing the winning amount from x5 to x1 000 of your placed bet. 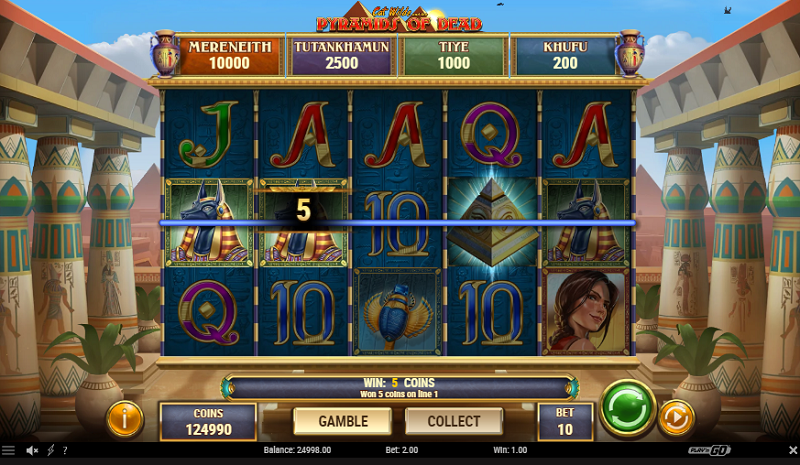 The main character, explorer woman, and the golden pyramid are the high-paying symbols. If you match these symbols on the reel you will be able to increase the total stake by x20, x200, x1 000, and x10 000 multipliers.

Even though the RTP level is high, the game offers diverse bonuses and high payouts, if you are still scared of taking the risk, we advise you to try Cat Wilde and the Pyramids of Dead demo mode which is available on the majority of online casino platforms.

Bonus feature diversity makes the slot gaming experience more attractive and exciting. Cat Wilde and the Pyramids of Dead offers different options to maximize your winning chances and satisfaction too. Let’s start with the jackpot round which includes four types of multipliers. Each level has the names of the pharaohs of Egypt. So, you can win x20, x100, x250, and x1 000 of your placed bet with Khufu, Tiye, Tutankhamun, and Mereneith jackpot levels.

Cat Wilde and the Pyramids of Dead free spins will be active after special pyramid symbols. They can give you 8 free spins. This will give you a better chance to land more winning combinations during the extra spin rounds. Also, the game includes a special gamble feature. After activating this feature you are inside the pyramid cave and play with different potteries. This is the round with higher payouts. During this feature, you can get the instant prize with multipliers from x100 to x500 of the bet.

To conclude, Cat Wilde and the Pyramids of Dead is a great slot game for those who are looking for a different and very exciting gaming journey. The unique aesthetics, wonderful conditions, and impressive bonus features are creating a very interesting and worthy gaming experience for every type of player. We advise you to not hesitate and start playing Cat Wilde and the Pyramids of Dead as soon as possible.