Gates of Olympus Slot Review – The Protector God is With You

Gates of Olympus is a popular video slot by the popular and reputable casino games developer Pragmatic Play. The name of the slot does not betray the theme of Greek mythology that the game revolves around. If you are a fan of mythical and divine stories and design, the slot will surely be pleasing to you.

Let the god of gods and the protector of all humans – Zeus take over your fate. The king of the universe with his lightning powers will be there with you to help you win big and great rewards in this highly volatile slot. Gates of Olympus is accessible to players worldwide to play on mobile and desktop devices with high quality.

The game comes with an RTP of 96.50% and you can make a bet of up to 125 USD. The 6×5 reels give you the opportunity to collect free spins and land big winning combinations. You can even play the Gates of Olympus demo version on the internet in case you wish to enjoy the visuals and get familiar with the gameplay without betting real money.

A Better Look At Gates of Olympus Visual Aspects

The game takes place on the divine mountain Olympus – the home of glorious gods. Next to the reels stands – or more specifically, floats the king of all gods Zeus. Pragmatic Play’s version of the great god of the sky has glowing blue eyes and wears white clothing with golden details. Zeus looks as mighty as you would imagine the father and the protector of all of humanity to be. 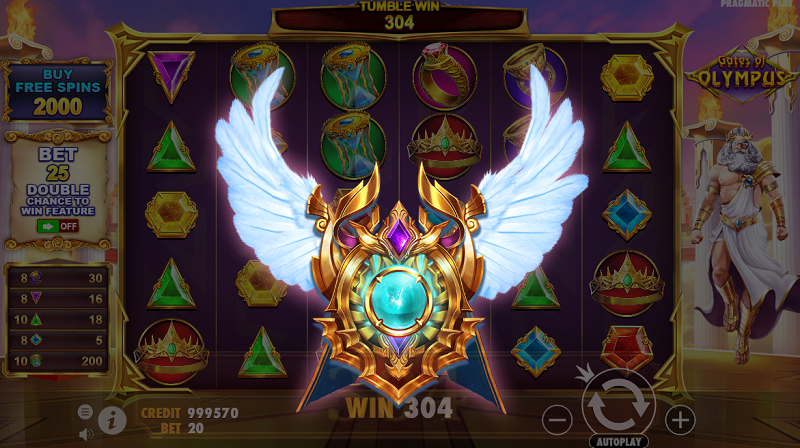 At the peak of the mountain, there is a palace where the reels are set, true heaven with a golden floor and big poles with fire. There is a castle in the clouds that appears in the distant background. Pragmatic Play’s imagined paradise of the Olympians seems to have been created with the inspiration of Disney’s Hercules.

The symbols that fall on the reels include a crown, a ring, and a golden goblet. The entire slot gives you the sense of the divinity of the Greek godly world. The aura of the game and the dominating color of the design change when it comes to the Gates of Olympus free spins game. This is when the golden and light colors are transformed into dark blues. 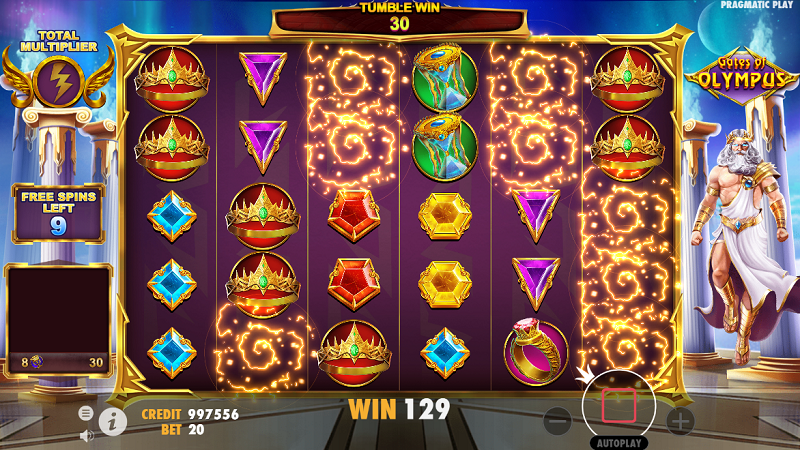 With the power of Zeus, when you land a winning combination, the winner symbols disappear and create a beautiful golden visual of a splash. When you have collected many big wins the game will show you a beautiful symbol with wings that remind us of Hermes – with the win counter on it.

Gates of Olympus Audio – How Does It Feel?

When you see a powerful, tall, and strong father of all gods appear in front of you the music you would imagine playing – that is the sound of the Gates of Olympus slot. The bells ring and the tense music is played in the background. When you hit a winning combination the symbols fade with a ding. When Zeus displays his powers with his infamous bolt of lightning you can hear the thunder.

This slot is quite unusual with its template. Winnings do not occur like they would in a typical video slot. Because of this reason, we will explain how to play Gates of Olympus in this review. Here, when you land a winning combination the symbols disappear and the non-winning symbols fall in their place to create more potential wins – this occurrence is called the Tumble Feature. Tumbling continues until the reels are empty of the winning combinations. 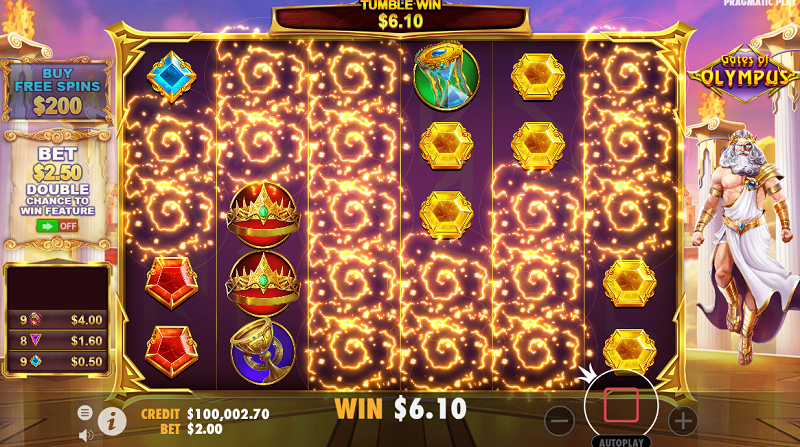 The slot also includes multiplier symbols that appear randomly to multiply the wins by various multipliers. The bonus feature may occur during the main game and the free spins round. After the tumble sequence has finished all of the winnings are added together and multiplied.

When the Tumble feature keeps occurring the winnings are counted and presented to you on the left side of the reels.

Gates of Olympus Bonus Game At A Glance

The slot comes with the special game of free spins that we will describe in this part of the Gates of Olympus guide. You can either buy the feature with 100x the bet or win it with 4 or more Scatter symbols on the reels landing together – the Scatter symbol is the face of the mighty god Zeus with the blue glowing eyes. 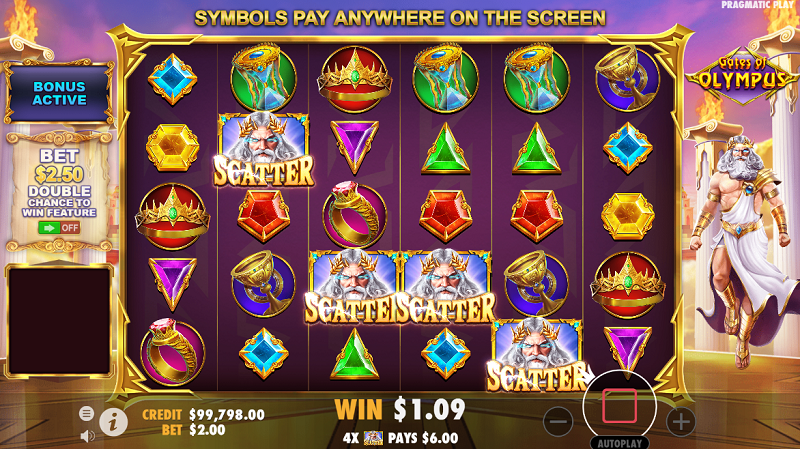 During the free spins round, the light morning sky is switched to the dark night sky. The game begins with a lightning bolt flashing on the screen and a celebratory sound. At the start of the round, you will receive 15 free spins from the great king of Gods. 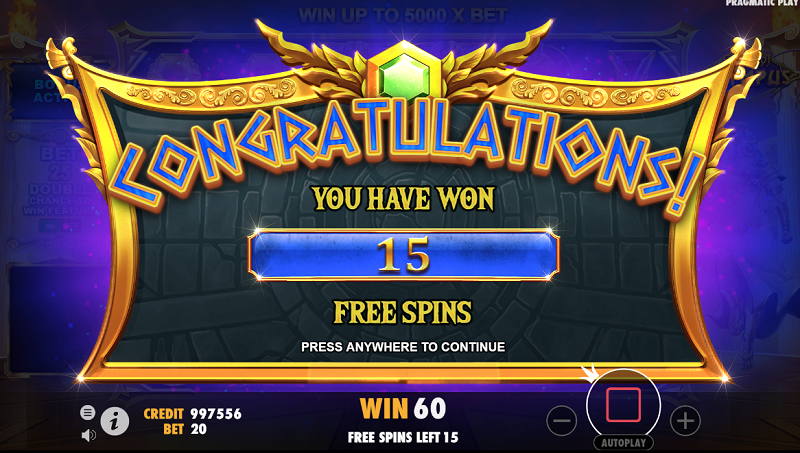 All in all, the game promises a gaming experience of high quality with big winning opportunities, the free spins round, multipliers, and an RTP of 96.50% – which is above the average of the standard casino games’ return to player percentage.

The Gates of Olympus slot comes with marvelous visuals – the type of design that we have seen in Disney animations and altogether, it brings us the feeling we would expect to get in the presence of the glorious king of gods.

The slot has an interesting and favorable theme and the setting of the reels is incredibly appealing. The players get the opportunity to play the divine game on mobile and desktop devices with graphics of high quality.