The Hot Spin Megaways slot has classic fruit machine graphics, a Megaways mechanic with cascading reels, an expanding multiplier feature during free spins, and a bonus wheel that may offer ten different modifiers. It was developed by iSoftBet and features six reels and 117,649 chances to win. It’s true that other Megaways slots might be monotonous, but not this one, owing to the huge variety of extra features. 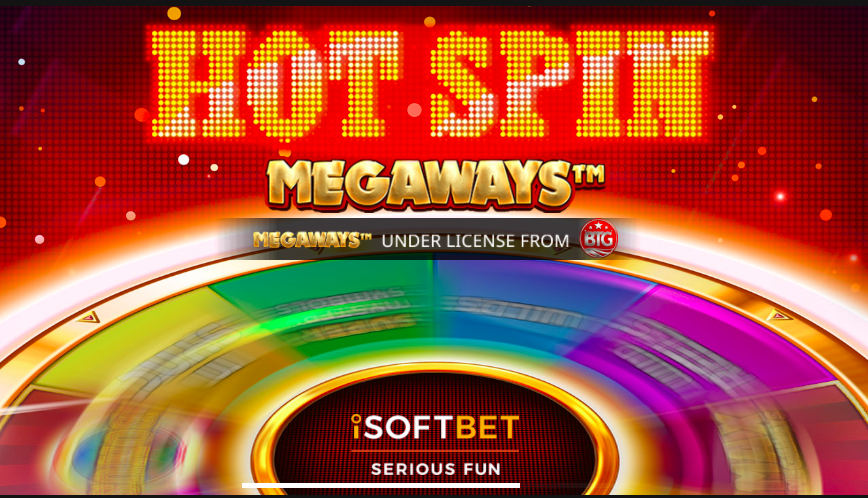 Once you start playing, you will immediately notice that with each spin, the amount of symbols that show on each reel varies. The more symbols you have, the more chances you have to win. Although it might seem a little difficult at the beginning, the overall gameplay is not hard and you can learn to play within several spins. The stakes of each spin vary from $0.2 to $20.

With a 95.98 percent RTP, Hot Spin Megaways falls just short of the industry average of 96 percent. Because of the high level of volatility, you should not expect large gains too often. You can win up to 50,000 times your entire bet per spin if you are lucky enough. ​​The cherries, lemons, and watermelons that you’d expect to see on a fruit machine are all present on the Hot Spin Megaways slot machine. The vibrant purple background is accented with stars, golden bells, and red 7s. Your attention will be pulled to the gently rotating bonus wheel on the left, which has a number of enticing bonuses including mystery symbols and wild reels.

iSoftBet’s Hot Spin Megaways slot machine may be played on a PC or a mobile device, providing the same high-quality experience regardless of the platform you decide to use. 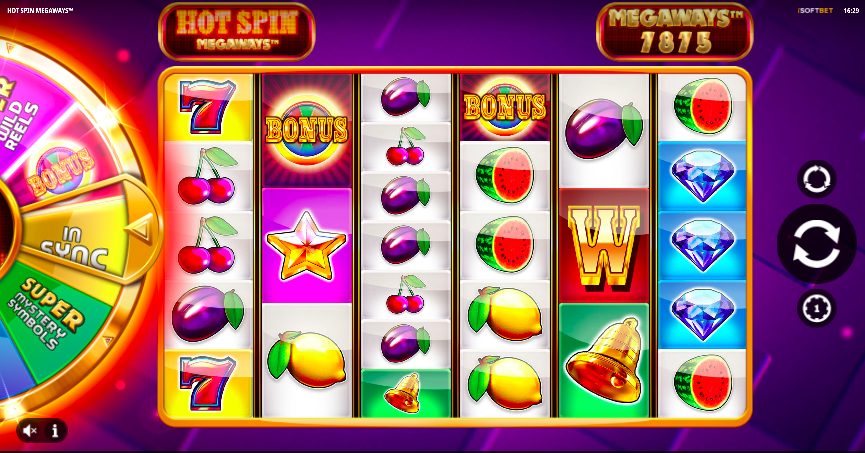 This iSoftBet slot game has a retro feel about it. Hot Spin Deluxe and Hot Spin Megaways are two of iSoftBet’s most popular games. The design is straightforward, yet the vibrant artwork pops against the white reels, just like its predecessors. It’s the Megaways version of Hot Spin and Hot Spin Deluxe, two of iSoftBet’s most popular titles. The design is basic, like with its predecessors, but the colorful artwork is beautiful and sharp against the white reels.

The layout utilized in the Deluxe edition has been retained by iSoftBet, as opposed to the actual slot depiction used in the original. The left half of the screen features a bonus wheel, while the central section is made up of a 6-reel Megaways grid. 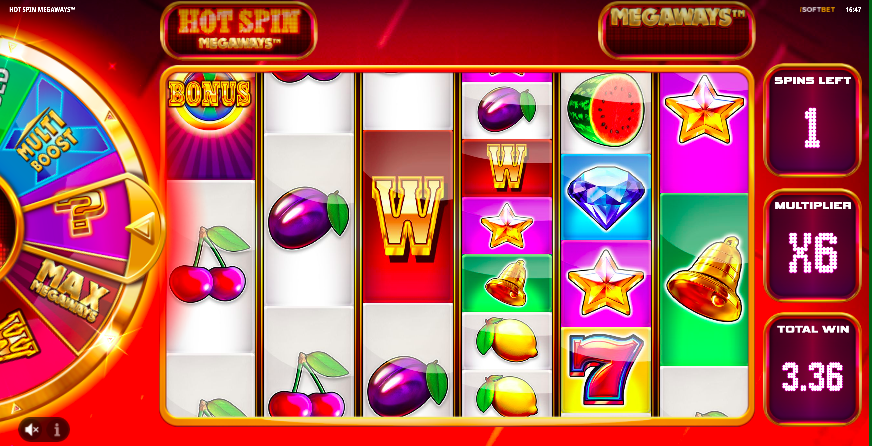 One of the best things about Hot Spin Megaways’ design aspect is the fact that it is very easy to navigate. All the necessary buttons are presented on the main screen and you can easily access them with one simple click. For instance, if you wish to read the instructions of the game, you can click the “i” button. There is also an auto spin option that lets you make spins automatically if you are too lazy to click it over and over again. You can also easily change your bet size – overall, those that enjoy simple-looking online slots should definitely try it out.

Hot Spin Megaways Audio – How does it feel?

Online slots are built with the goal of making gambling a pleasurable experience. A lot of things take part in the overall process, however, the audio is something that can encourage players to enjoy the gameplay more and more. That’s why the majority of software developers try to create a sound that is both memorable and exciting. Seems like iSoftBet is aware of this fact and it comes as no surprise considering how experienced this software developer is.

The audio of this iSoftBet slot is up-to-date and goes well with the graphics. It has the vibe of a laid-back Ibiza chill-out track. It’s all pretty straightforward, yet it gets the job done admirably. 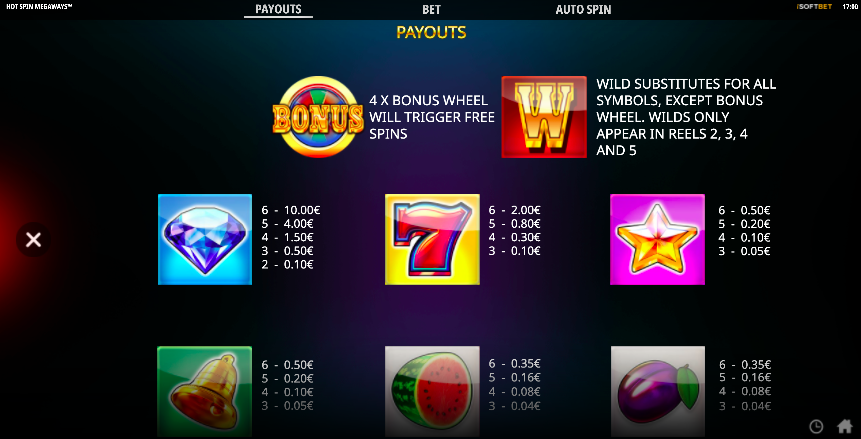 Each reel in the Megaways system has a random number of symbols on it. The number of symbols may range from two to seven, and it gets easier to win when there are more symbols present. So, how does exactly this iSoftBet slot game work? There is a cascade of wins when a winning combination hits, thanks to the Cascading Wins feature. New symbols descend into the grid to replace the unsuccessful ones. As long as a new winner can be found, the cascades will continue to occur.

In addition to cherries and lemons, plums and melons can be found on the slots’ five reels. The diamond is the highest-paying standard symbol, and landing six of these on adjacent reels will reward you with a payout of 50 times your entire bet. The W stands for “wild” in this context. This symbol appears exclusively on the second, third, fourth, and fifth reels, and it substitutes for all other symbols except the scatter. You can also come across the wheel bonus symbols, which can activate iSoftBet free spins. 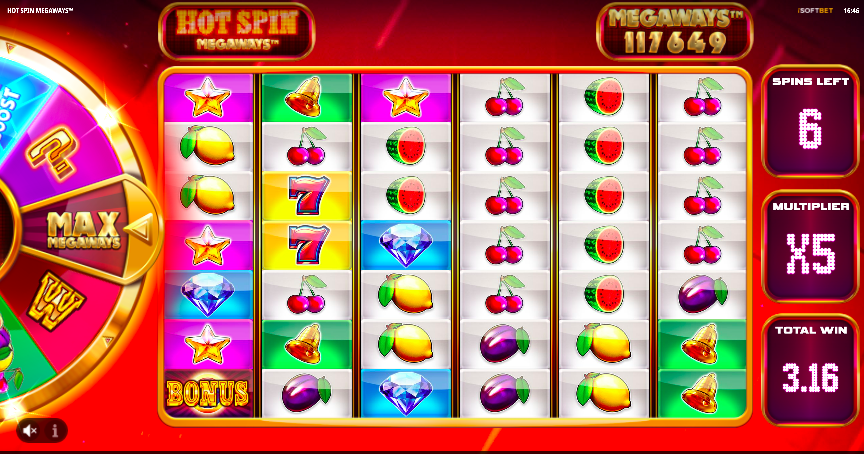 Considering how this game works, we believe that it is impossible to get bored with Hot Spin Megaways. Other than things we described below, players also have the privilege to come across different interesting features that we are going to discuss now. 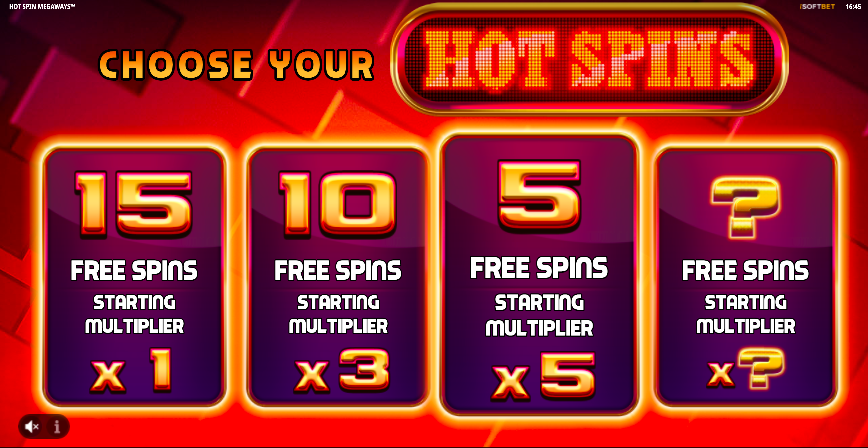 When it comes to additional features, Hot Spin Megaways has a ton to offer. In the main game, a bonus wheel can provide one of ten distinct modifications. There’s also a free spins bonus round with a multiplier that grows as you play, as well as additional bonus features. There are 14 extra iSoftbet bonuses in total. Sounds exciting, right?

The Hot Spin Wheel can be found to the side of the reels. This can happen at any time during a spin. The wheel is composed of ten segments, each of which grants a unique modifier function. The modifier on the wheel window will be active for a single spin once activated. For instance, with the wild feature, the reels are supplemented with 5-8 extra wilds, while with the super wild, 8-12 wilds will be added.

If you wish to activate the Hot Spin Free Spins Bonus feature you will have to land four or more Bonus symbols anywhere on the reels in the same spin. After that, you’ll have the option to choose free spins and start multipliers. As soon as the free spins begin, a multiplier increases. With each new cascade victory, the multiplier is raised by one. This is referred to as the “Unlimited Multiplier” feature. In the event of a failed cascade, the multiplier does not reset – instead, it keeps on growing throughout the game. 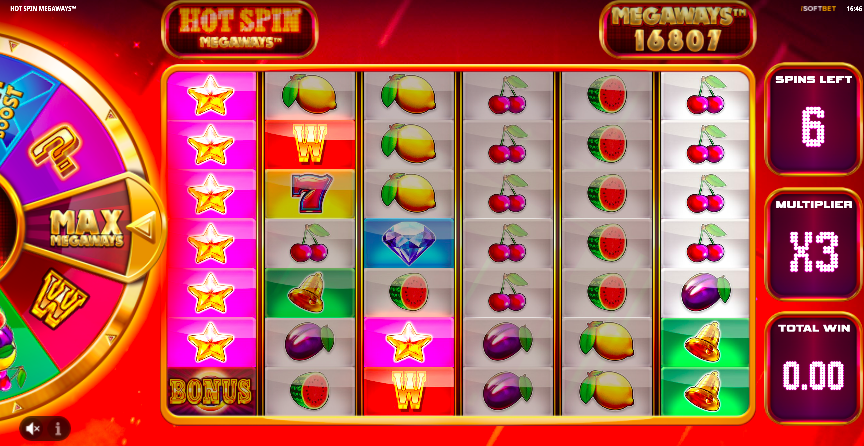 Some Megaways slot gameplay might get tedious after a while due to the repetitious nature of the genre. Fortunately, that won’t happen in the Hot Spin Megaways slot machine owing to the several modifications that make the fundamental game a lot more interesting. There are more additional features in this edition than in the original or deluxe. All in all, we do believe that Hot Spin Megaways offers some very interesting features and it is recommended to any kind of player across the internet.