Among small game studios, Thunderkick is one of the most successful. The Swedish developer came to the iGambling arena in 2012, and the project’s main idea was to produce inimitable casino games. In the world of giant suppliers, it was initially planned as a unique rather than a large enterprise. And this might be the secret of the studio’s success.

Over the past years, the company has expanded to a team of no more than 70 employees. It has replenished the world’s supply of casino games with about 60 titles, all of which are slot machines.

Some would say that this result is too slow. But the Thunderkick slot game manufacturer is the case when quality beats quantity. The best online gambling platforms in the world are now the partners of the company. In our review, we are going to show you the newest and most impressive releases from the studio. You’ll learn the benefits of playing them for real money, as well as the advantages of the provider as a whole.

The Newest Games from Thunderkick

Let’s start with a quick overview of the developer’s latest releases to know the actual level of innovation in the company.

In this 5×3 video slot designed as an adventure through abandoned jungles, your mission will be to find treasures of the Phoenix bird. It is believed to bring luck, and you have every chance to assure yourself of this since the slot’s max win limit is 10,000x your stake. 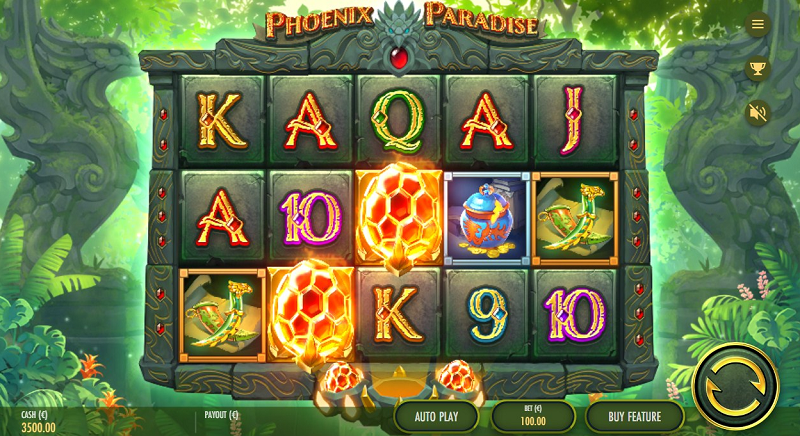 Phoenix Paradise is a striking example of how elegant and sharp the Thunderkick game studio’s design can be. But the slot’s benefits don’t stop there. The gameplay is full of bonus features present in both base and Free Spins rounds. The key symbols are Wilds. Besides their traditional role, they can become Walking and trigger a series of Respins with special Wild Multipliers.

One more tip is to keep an eye on the three-section Meter under the grid. Once you refill all the sections with flaming Bonus Symbols, you’ll unlock 8 Free Spins. A short way to the Phoenix treasure is to use the Buy Feature option. The slot allows the player to re-trigger four extra spins. The game’s variance is high. Be ready for a range of RTP models, so the best online casino with Phoenix Paradise for you might be the one that offers the highest percentage of 96.13%.

Among Thunderkick slots, there are quite a few classic fruit machines. Their main differences are in fresh design solutions and feature-abundant gameplay. Triple Royal Gold is an exact example of such a slot. Its model with three reels, three rows, and 27 winning lines makes you feel as if you play a good old one-armed bandit.

But expect more complex gameplay here. Its core feature is the Avalanche mechanism that makes winning symbols disappear and be replaced with new symbols. Among them, you’ll notice letters B, O, N, U, and S. If you manage to collect them all on the Meter during one Avalanche session, you’ll unlock the bonus round with 8 Free Spins. Complete the Meter during the bonus session once again, and you’ll get two extra spins.

One more source of boosting your wins in triple Royal Gold is a Multiplier system with the highest-paying one of 27x. The slot has an extremely high variance and an RTP of 96.41%. The biggest prize is 5,000x your wager.

Meet the freshest design innovation from Thunderkick gaming company – its voyage-genre Shifting Seas slot machine. Like any sea adventure, it is sure to bring surprises to you, and one of them is the slot’s grid. It has a telescopic form, and it actually shifts. The number of reels here is stable: there are six of them supplied with a 4-4-3-3-2-2 row model.

But thanks to the Shift Win and Boost Shift features, every win will make the final row with two rows disappear, and a new 5-row one appears next to the first reel on the left. Since this is an Avalanche-feature slot, your wins may follow one after another, thus transforming the reel telescope into a bigger and bigger one up to a 6×7 rectangle with 117,649 winning lines.

The way the game features Wilds and the Free Spins round is no less impressive. Your sea campaign promises to be tough – expect massive tossing or, as gamblers call it, high variance. The RTP is 96.15% here, and the biggest prize you can bring back from travels is 15,000x your wager.

These releases show how masterly Thunderkick can innovate any genre and create an online slot with the weirdest design and set of features. But most games also support solid betting options and may offer truly massive prizes. So, pick any of the above premieres and enjoy playing and winning in it.

The studio we’re reviewing specializes uniquely in slots. We have found 59 slot machines in its portfolio so far. But don’t be too fast to disdain the number. These are top-quality games, regardless of their genre, math model, or winning potential. Each of them can become your favorite, but let us present you with a list of Thunderkick titles that might interest you the most:

Some of these games can be easily associated with a certain genre, while others go beyond the boundaries of any genre and represent unique artwork. Let’s observe some of these releases in more detail.

When you think slot machines are all the same and there’s nothing left to invent, Thunderkick is here to make you change your mind. Let’s review the provider’s top-popular games with non-trivial designs.

This slot’s design is minimalistic: you get into the desert with a fossilized elephant head and a couple of tribal signs on it. It rather buys you with its impressive animation. Besides funny creatures and an elephant, there are bonus symbols in this 6×4 slot with 4,096 bet ways. They include Wild, Scatter, and Mystery Scatter Symbols. The latter increases your chances of building a Scatter winning line to unlock the bonus game.

A collection of 3-6 Scatters on reels will award you Free Spins. Their number ranges from 7 to 19. During the Bonus game, Scatters remain active, and even two of them gathered on the reels will add extra spins to your bonus balance. But the main mission of the session is to complete the Meter with Elephant Symbols. This can transform other symbols into Elephants as well as add more Free Spins.

The slot belongs to the medium-high variance type and has an RTP of 96.10%. The winning potential is also solid – you can win up to 8,200x of your bet.

This Thunderkick casino oldie still can fascinate any player, although it pays out only low-scale prizes. Once you launch the game, you get onto an old-time map – this is your gaming board with traditional five reels and three rows. The slot offers 25 winning lines.

Sounds simplistic? But the slot has several extras to make your sea trip enchanting. First, the gameplay includes Expanding Wilds. They expand as soon as they make a winning combo on the reels. There’s also a Bonus Symbol. Its role is clear: collect 3+ Bonus Symbols, and you’ll play the Free Spins game. Free Spins are awarded in the following way:

This is a very simple slot, ideal for beginners. But seasoned players love it, too, because of its generous RTP of 98.5%. The game’s variance is low, and the max win is a modest 670x your wager.

The Thunderkick’s idea of what gods of rock look like might be bizarre, but this 6×4 video slot with 466 bet ways is sure to electrify you with its spectacular features. Its key bonus feature is the Charged Wild. Once it lands on the reels and forms a winning line, it explodes, and so do the symbols standing next to it. The initial 1x Multiplier upgrades to a higher level, too.

Be ready for very high volatility in Gods of Rock! The game’s RTP is 96.05%. As to its maximum payout, the slot can throw a sensational prize of 20,000x your stake on you.

Think these are the most original games from the developer’s portfolio? Nope. There are plenty of surprising toys left for you to discover. So, feel free to continue searching for your best Thunderkick online game to play it for real cash.

Any video slot from the manufacturer has a demo version. Make use of this option since it’ll let you learn your chosen title’s gameplay before placing real money bets. In the case of this provider, it might make a difference.

If your preferred mode of gambling is mobile, you’re welcome to play any slot from the provider through a mobile browser or on a casino app. All slots are played without downloading.

The game studio collaborates with the world’s best gambling platforms. When you join a legal and well-packed casino with the developer’s slots on the list, you may expect the following incentives from it:

So, when choosing a casino to play this studio’s titles, pay attention to its promotional program. It may be decisive for your wins.

The developer produces top-level casino software, and the best platforms are proud to partner with this small but precious studio. Let’s sum up its benefits for players.

Thunderkick supplies the top casinos with legal content of the premium class. The quality of its products is proved by the following licenses and certificates:

All titles’ outcomes are based on fair RNG mechanisms. They are 100% random.

At your disposal, there will be about 60 games from the studio, all of which are slot machines. At present, you can play neither live nor table games, like Blackjack or Poker, from this provider.

The Thunderkick gaming company employs the advanced technology of RGS for creating games and providing them to its partner casinos. The RGS engine, or Remote Gaming Server, is a universal tool that includes the API platform. It helps casinos easily integrate the software into their gaming platforms.

Thunderkick ranks among the top-innovative developers in the iGambling industry. Take any of its titles, and there’ll be a couple of out-of-a-kind design solutions. Many of its games cannot be classified according to the genre since they either combine several of them or stand out from common classifications.

As to mobile compatibility, the provider bases its content on the latest HTML5 techs. So, you can enjoy the manufacturer’s innovations on both desktop and hand-held devices without quality loss.

It’s hard to pick a slot from this provider that goes with a feature deficiency. Instead, most Thunderkick titles offer extra rounds with Free Spins and include other original features. The studio tends to update and diversify the functions of traditional Multipliers, Wild, and Scatter symbols.

You can get various promotions for playing the studio’s titles for real cash. There can be bonuses – deposit or deposit-free – for both new and regular players.

Yes. Each of the slot machines from the manufacturer runs seamlessly on hand-held devices.

Which Are the Most Popular Thunderkick Games for Real Money?

Many of the Thunderkick slots are praised by gamblers. Titles like 1429 Uncharted Seas, Esqueleto Explosivo, Babushkas, and Pink Elephants are surely among them.

What Type of Casino Games Does Thunderkick Develop?

The studio produces slots only. However, these are top-quality games of a masterpiece level.

Where to Play Thunderkick Games?

Be sure to choose only legal Thunderkick casino platforms with secure payment methods and a variety of services. Pay also attention to your chosen casino’s promotions. They must appeal to you.