The Bushido Ways xNudge slot machine from Nolimit City is based on the aristocratic Japanese warrior class and is beautifully crafted. The game begins with five reels and a total of 1,024 chances to win, but it has the potential to grow to as many as 12,288 ways to win. To start playing, you need to begin by betting as little as $0.2 for each spin or as much as $100. To see all of the possible bet levels, you can click the dollar and choose the one that suits your preferences the most. 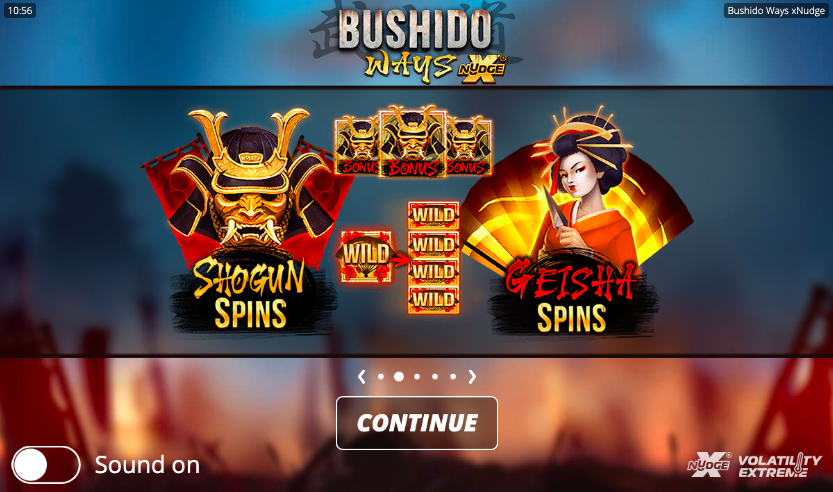 With a return to player percentage of 96.01 percent, Bushido Ways have an average RTP typical for the majority of slot games. The RTP may rise to as high as 96.82 percent if you purchase one of the free spins bonuses. On average, you’ll hit a winning combination on roughly 21% of your spins. As for the volatility, it is extremely high and is rated 9/10 by developer Nolimit City. The greatest possible win from a single spin is 30,000 times your total bet.

To win, players must line up three or more matching symbols on the reel. There are eight symbols available in total. The list includes five low-value 10 to Aces card royals and three warrior symbols. This Nolimit City slot is a game that can be played on mobile, tablet, and desktop platforms. No matter which device you decide to use, you will still discover a high-class design and a vast range of features. If you happen to be intrigued by this online slot, then keep reading our review. 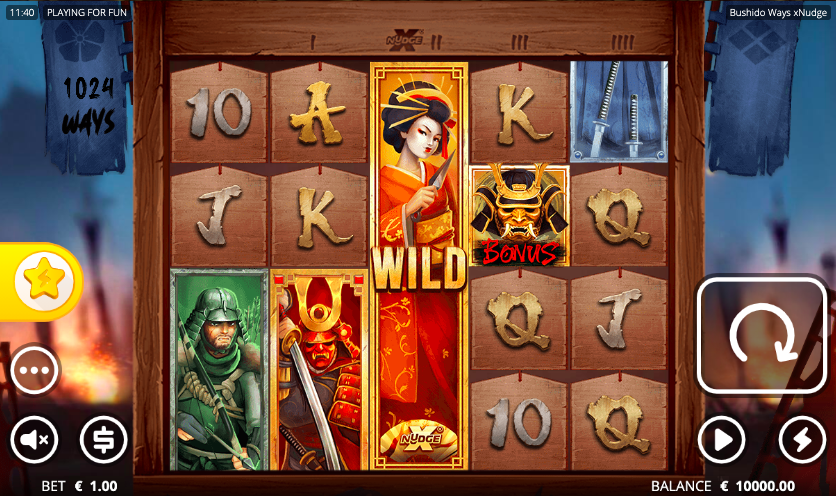 The theme of Bushido Ways xNudge is pretty interesting. The video slot takes place in Japan and is centered on the legendary warriors. The Bushido was a rule of conduct for Japanese Samurai warriors. Honor, respect, homage, grandeur, terror, and retribution are some of its most important beliefs. It resembles the laws of chivalry used by European knights in the Middle Ages.

Asian A to 10 icons appear on the wooden-style reels, along with higher-value Samurais that can land in stacked arrangements. They are all extremely beautifully designed and filled with interesting details. The Geisha, a nudging wild that can only appear on the middle reel, continues the Japanese motif. Other than that, this Nolimit City slot game is pretty easy to navigate – all the necessary buttons are presented on your main screen, so you can easily change and do whatever you desire to. For instance, by clicking three dots, you will be taken to the instructions screen where you can discover all the important rules and information that you might need throughout the gameplay. With the dollar symbol, you can easily adjust your bets and even use the “autoplay” button if you are too lazy to click the spin over and over again. 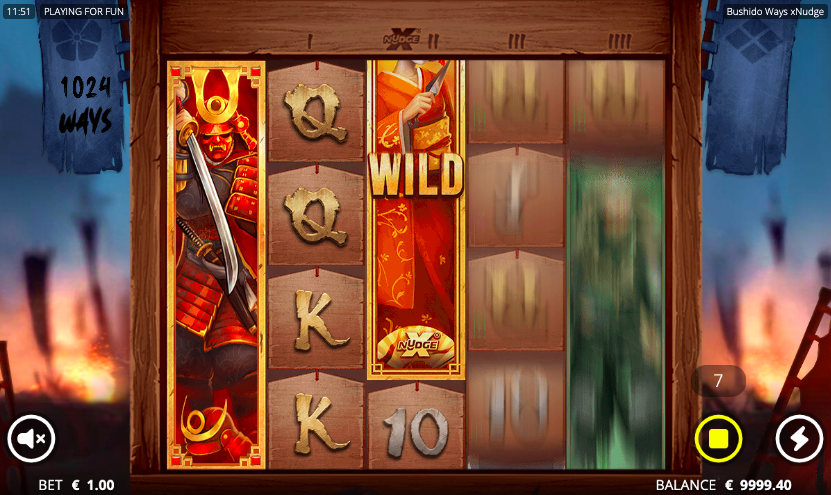 All in all, Bushido Ways xNudge is one of the most beautiful slots that you can come across, and therefore, is one of the main reasons why this game is definitely worth trying.

Bushido Ways xNudge Audio – How does it feel?

Besides the main theme and design, another important aspect of any online slot is its music. You might have not noticed yet, however, the audio plays a crucial role while playing as it can provide your gaming experience with much more enjoyment and excitement. That’s why the majority of software developers try to create a sound that will be not only entertaining but will help players enjoy the slot more. Due to the fact that Nolimity City has a lot of experience in creating gambling games, there is no surprise that its Bushido Ways xNudge comes with a very good soundtrack.

Thanks to the traditional Japanese soundtrack created by the developer, you have got a slot that is both visually stunning and evocative of a major motion picture. This makes the whole experience super exciting! 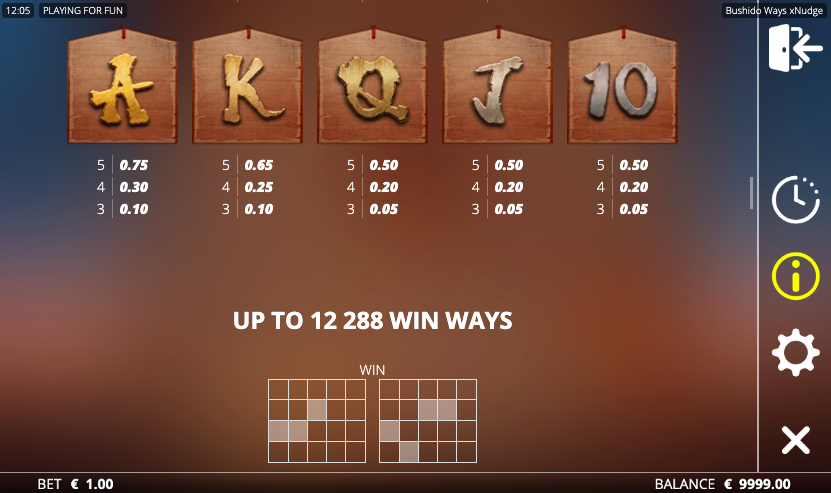 As we already mentioned at the beginning, there are 1024 ways to win in Bushido Ways xNudge, and winning combinations consist of three or more matching symbols appearing on adjacent reels. Symbols can split to create more winning combinations, up to a maximum of 12,288 possible combinations. 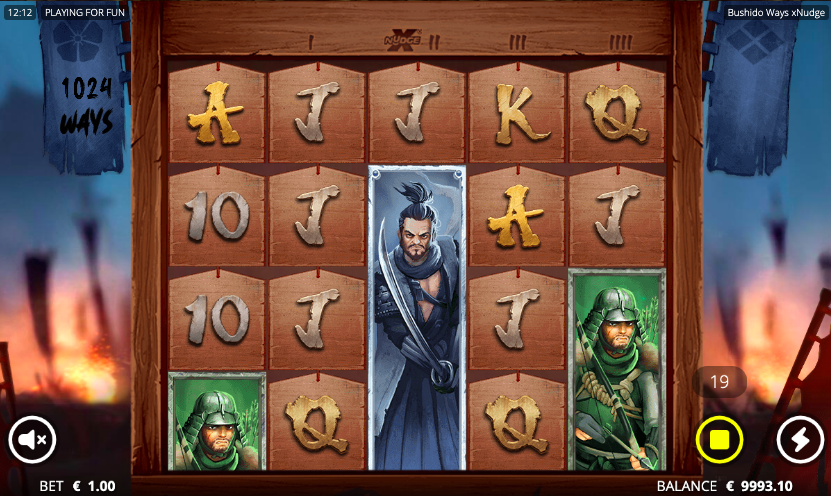 5 low-value 10 to Aces card royals and 3 warrior symbols are among the 8 pay symbols available. Warrior symbols are 1×4 in size and can appear partially or completely on a reel. As a result, premiums for single wins valued 1 to 2 times the stake have little value. Fortunately, the game has a slew of elements scattered throughout it that help players win more. Let’s take a closer look at them. 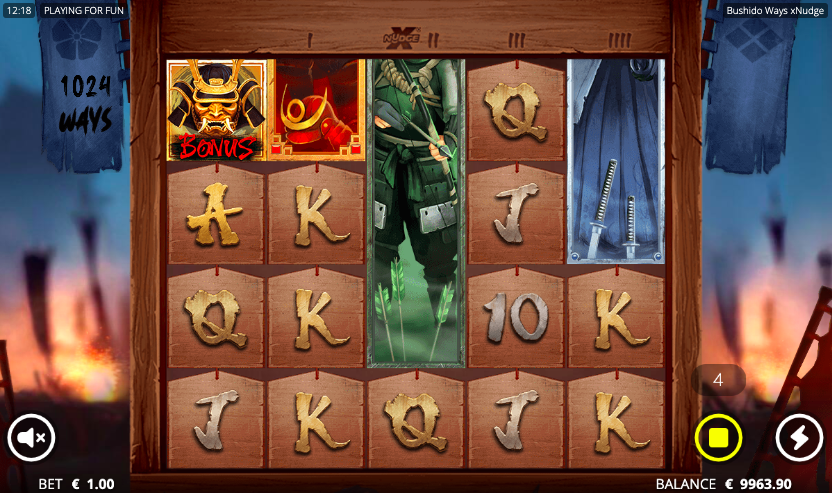 To make things more interesting, you will see a lot of various additional Nolimit City bonuses when playing Bushido Ways xNudge. Each one has a unique benefit that increases your chances of succeeding. Nudging wilds, sliced wilds, and transforming symbols are just a few of the features that players will encounter during the game. There are also two free spins bonus rounds to look forward to.

The Geisha symbol is as wild as her name indicates. She appears exclusively on reel 3 and spins in 4-high stacks. When she lands on the middle reel, the Wild Geisha function is triggered. The Geisha nudges the reels, causing them to go wild. A multiplier grows by one with each step the wild nudges.

When you land a stacked Samurai symbol with a bonus symbol on the same spin, the Oni Transform feature will be activated. Once the Samurai symbol appears, it becomes the most high-paying symbol on the reels. In addition, all lower-value Samurai are transformed into this new and profitable symbol.

Shogun Spins feature or 3 Bonus symbols plus a stacked Geisha wild on the same basic game spin will activate the Geisha Spins feature. 8 Nolimit City free spins are given this time around.

A sticky multiplier of up to 4x is applied to your winnings for each nudge the Geisha Wild makes. In addition, you’ll receive free spins with a multiplier of the multiplier’s amount. If you land a Bonus symbol on this reel, you’ll get one additional Geisha Spin. A single wild symbol will appear on one of the second, fourth, or fifth reels on every Geisha Spin. 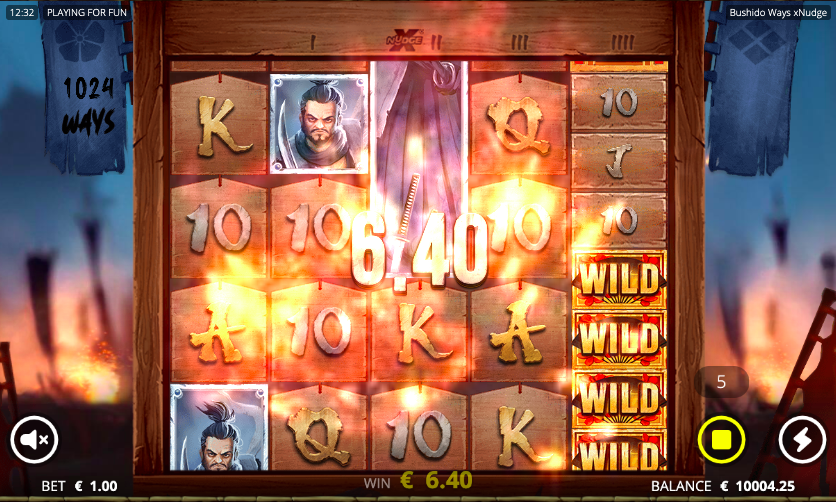 All in all, we do believe that Bushido Ways xNudge developed by Nolimit City is a pretty exciting online slot. It is important to note that it is uncommon for a volatile slot machine to pay out regularly. This is the case with Bushido Ways xNudge, although there are several unique bonus triggers to keep things fresh.

Another appealing feature of this slot is the range of bonuses. Split symbols, stacked symbols, nudges, and two types of bonuses are available. So there is definitely a lot going on, and while it might be a bit complicated at first to remember what triggers what, as the game develops, you get to explore a great range of interesting features.