Deadwood is an extremely charming slot released by the industry’s leading software development company called Nolimit City. This game has become famous for various reasons, but mainly because of its delightful and unique playing environment as well as the possibility to earn a lot of money in different ways. Hence, we are seeing a vast number of players who want to learn everything about this game, and as a result, we have decided to create this Deadwood guide to explain all the features in-depth.

First of all, we want to mention that Deadwood has been established for everyone who loves the Western lifestyle since you will encounter all the symbols representing their culture. You will notice this right away and the first impression will most likely be as if you are in some kind of a Western movie. As for the symbols, there are guns, whiskey bottles, gold, a clock, and a bag full of money. So, as you can see, all the elements are connected with Western culture and the colors are convenient for this lifestyle as well. 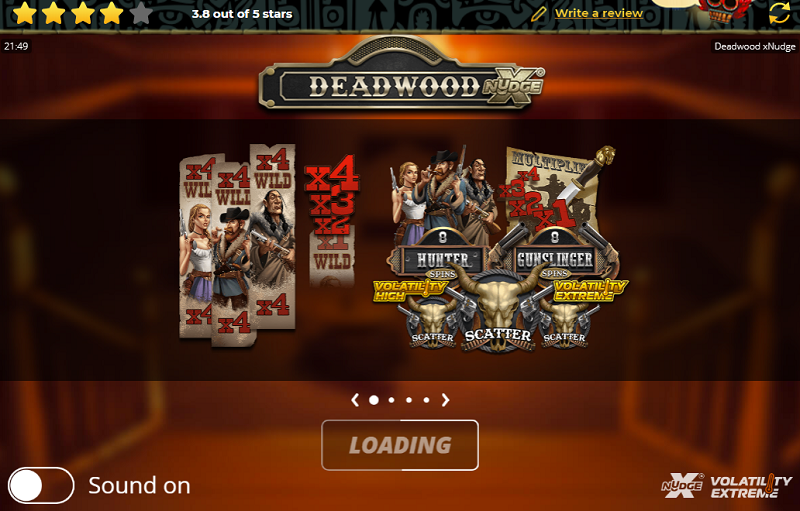 As for the game mechanics, we want to point out that Deadwood features an RTP of 96.03% and high volatility. Some people might be unfamiliar with these terms and it means that players are able to win high amounts of money not so frequently, so it will be a good idea to wait for your chances! This 5 reels slot contains 576 paylines and the highest amount you can earn here is an amazing number – 13.950x your initial bet!

Hence, there are enormous possibilities in this game, and what’s more, you have a chance to play a Deadwood demo version first in order to get a better idea of the gaming mechanics. By doing so, you will be well prepared to gamble with Deadwood real money in the future. You will find all the necessary info about this slot in the next part of the article. 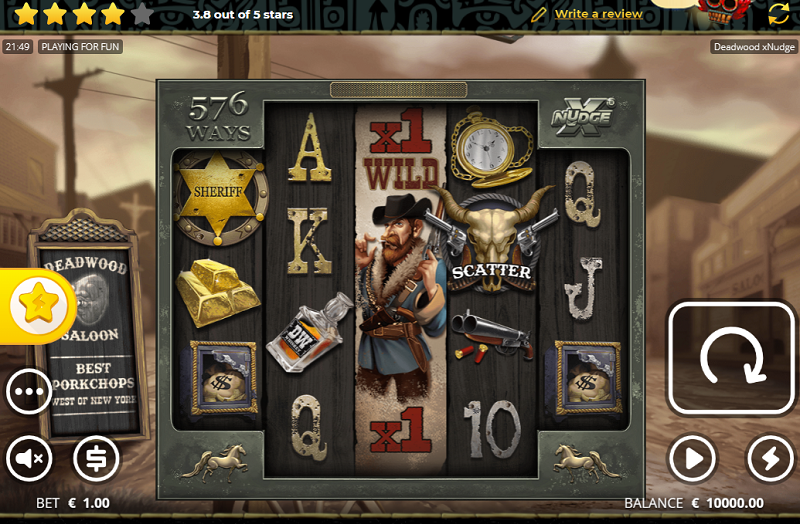 As we have said above, Deadwood is constructed entirely with Western elements and you will notice this as soon as you enter the game. The background is kinda blurry but you can see a street surrounded by different buildings and among them is a saloon, just like you would expect in such a place. The colors are relatively dark as well which once again indicated the true nature of the Western lifestyle.

As for the playground itself, the layout includes two horses located on the bottom left and right sides which is also a representation of the Western-style. You will come across the following symbols – a whiskey bottle, gun, clock, gold, and a money bag. We are sure you have already seen this stuff in a lot of Western movies or cartoons. So, the overall vibe of the game is unique as it helps you to go on an adventure to the West among the bandits.

Moreover, we want to note that the gaming interface is designed in a straightforward way meaning that all the necessary buttons are available on the screen and newcomers will not have a hard time playing this game. The Deadwood mobile version is as good as the real one, so you will also experience a high-class gaming atmosphere there.

Deadwood Audio – How Does It Feel?

The audio of Deadwood feels pretty much like the sound effects you hear in Western movies. The continuous sounds in the background have a thrilling effect on the majority of players and it increases the feeling of being somewhere in a Western place ready to rob a bank and steal a lot of money. Hence, the design and music are perfectly in sync with each other and they make sure every gambler will experience an amazing playing atmosphere.

Nolimit City is a pretty experienced company and it understands very well the importance of having an appealing soundtrack for every slot game. This is one of the decisive factors why punters are choosing a certain game to play since enjoyable music will make them engaged in the slot for a long time. So, they have tried their best to create an enchanting sound effect for Deadwood that connects with the design excellently. 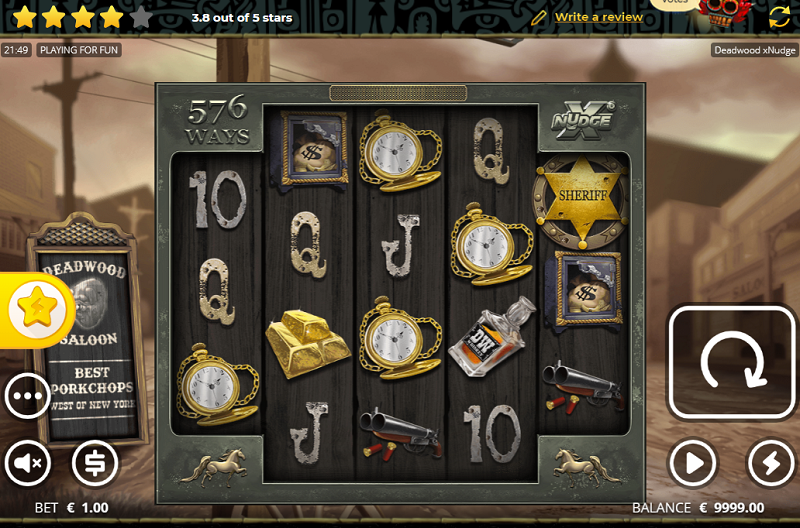 In the following part, you will learn how to play Deadwood properly. All the symbols mentioned above will reward you with different kinds of payout and the highest one is a bar of gold. Moreover, the game features a 4-row hunter wild figure that appears on 2, 3, and 4 reels and it is able to replace all the other icons except for scatter and bonus.

The hunter wild symbol will always nudge to fully visible and it increases the multiplier by one point and in case you catch several of them, they will add to each other for a total wild multiplier. Also, there is a shoot-out feature that is triggered by collecting sheriff badge symbols on the first and fifth reels and every low win figure on center 2 reels will be replaced by wild icons. This feature is promising to award you huge amounts of money!

Deadwood Bonus Game At a Glance 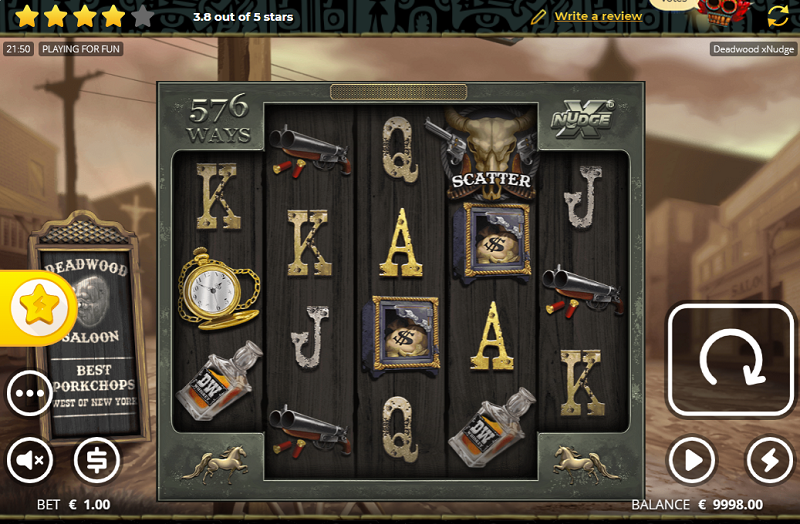 Deadwood includes two types of bonus games which is quite a unique characteristic that you will not see in many slots nowadays. In case you collect three or more scatter symbols you will be eligible to choose either 8 Gunslinger Spins or 8 Hunter Spins.

During the Gunslinger Spins, the hunter figures will reward you with an unlimited win multiplier that will be stuck throughout the entire round and every new one will increase the multiplier by one point. As for the sheriff badge icons, they are able to give you additional free spins and if you catch both of them together, then the shoot-out feature will be triggered where sheriff badge symbols will be locked in place.

As for the Hunter Spins, at least one hunter wild symbol will drop on every spin and sheriff badge icons will help you to gain more free spins as well. Landing both figures will result in the same shoot-out feature mentioned above, where sheriff badge symbols are locked in place.

Hence, Deadwood free spins in the bonus rounds have the possibility to award you enormous prizes!

In this Deadwood review, we have provided thorough information regarding a fascinating slot that was established by a well-known provider called Nolimit City. This game will most likely take every visitor on a journey to somewhere in the West where all the fun is waiting for you! So, Deadwood was created for every enthusiast of the Western lifestyle and it will give you tremendous satisfaction from the very first second of arriving!

What’s more, there are huge opportunities to win a lot of money in this game with the help of high RTP and volatility. So, if you are willing to wait for your chances, then you might earn the highest payout – 13.950x your bet in this game!