Fruit Zen has been launched by one of the top software development companies called Betsoft and it is engaging a vast number of punters day by day since then. It is pretty much a modern version of a classic fruit slot that appeared in the gambling world way back in the beginning and the majority of oldest slot games were constructed with such a theme.

As you can tell, it did not lose popularity and developers are constantly trying to upgrade different attributes and release modern versions of the oldest games. Fruit Zen is one of them since we encounter a lot of added elements which is the main reason why punters get attracted to this slot. Due to this fact, we would like to write a Fruit Zen review that will contain all the necessary information regarding the characteristics of this game, which is broadly available in various online crypto casinos. 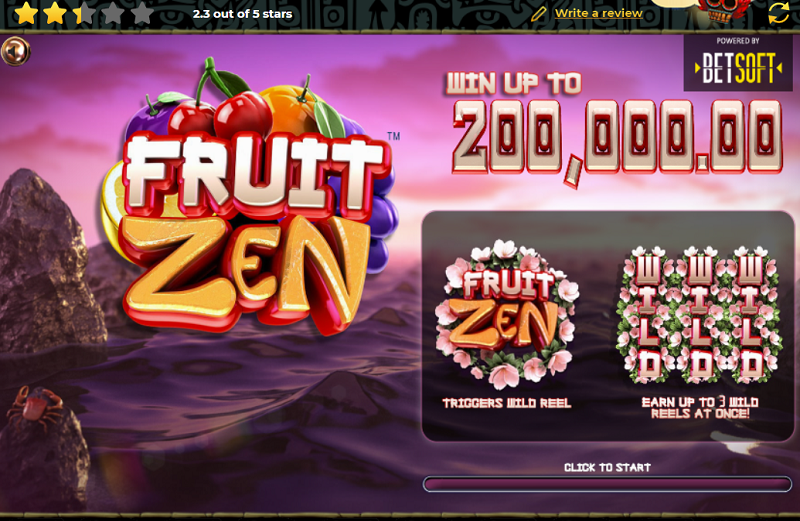 For starters, we want to talk about the details of gameplay. You will see a classic playground of 5 reels and 3 rows, and 10 paylines are promising to reward you with winning combinations. The RTP of Fruit Zen is slightly above average – 95.96% meaning that you have a chance to get back considerable amounts after gambling. This slot includes medium volatility, so you should expect to win frequently but not very high amounts of money. However, if you are patient enough to wait for your chances, then you might obtain the highest payout of Fruit Zen, which is a colossal number – 200.000x your initial stake. Needless to say, such an opportunity is extremely rare and you will not encounter it in the majority of slots nowadays. Hence, this quality really helps Fruit Zen stand out among the rest!

As for the visual aspect, we want to note that Fruit Zen is an Asian-themed game featuring 3D graphics. This is what we meant when we said that developers have upgraded an old classic version of the fruit slot since you will come across an improved playing interface with more vibrant colors. The symbols consist of only fruits and we don’t see standard card figures here, which is pretty rare for the modern slot game but given the fact that it is based on an old game, developers did not want to alter game mechanics significantly. The diversification of colors will have an eye-catching impression on every visitor and the easy-to-understand game design will help them to gamble in this slot effortlessly.

If you wish to get familiar with the game first, our recommendation would be to play a Fruit Zen demo version that is available on multiple websites online. As soon as you learn every detail about game mechanics, only then you will be ready to gamble with Fruit Zen real money. 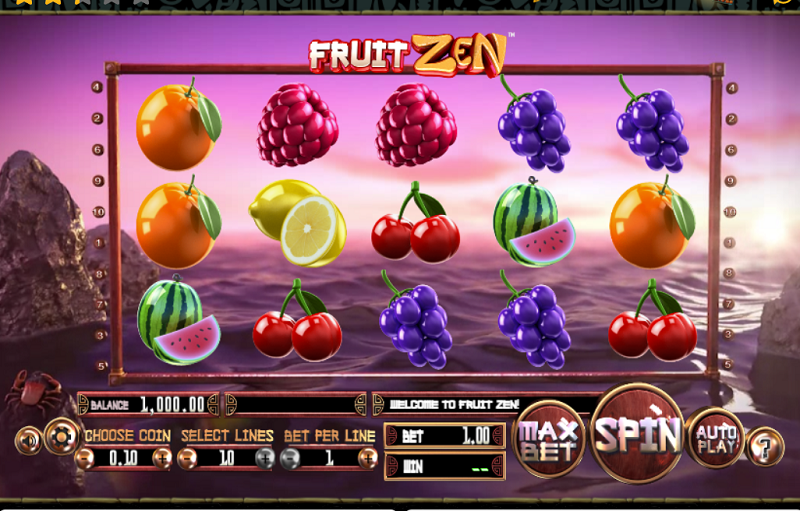 We can talk about the design aspects of Fruit Zen here. The first thing we want to point out is that this slot bears a strong resemblance to the Asian style and the name itself represents Japanese culture. Zen is a Japanese school that emphasizes the value of meditation and calmness.

Hence, you should expect a calm and peaceful vibe when playing this game. You will see a pink sky in the background along with calming Japanese waters with some rocks around. Also, there is a sun on the horizon that helps you to feel as if you are on an island looking at the sunset and enjoying a peaceful situation. All these elements once again indicate the Japanese lifestyle, since it is well-known how they value peace above all.

As for the symbols, you will run into all kinds of fruits here such as – watermelons, plums, cherries, raspberries, lemons, grapes, and oranges. They are all colored differently, and as we have mentioned above, the visuals are highly improved compared to old classic versions of fruit slots. So, if you are an enthusiast of old games and want to experience new features related to them, then Fruit Zen is a dream destination for you!

What’s more, the developers at Betsoft have worked hard to create an easy-to-use playing environment where all the necessary buttons are available in the game. By doing so, they ensure that even newbies will not have a hard time gambling here, and also, they have established a Fruit Zen mobile version which consists of the same high-quality graphics and visuals. Hence, you are able to play this game with any kind of device comfortably.

Fruit Zen Audio – How Does It Feel?

The audio of Fruit Zen feels very much like a traditional Japanese song that you may have already heard in their movies or cartoons. There are calm pieces following the game vibe perfectly since it is well-known that Japanese culture is all about peace and calmness. Also, there is a quiet sound of waves in the background that once again makes you feel in a completely peaceful environment.

Betsoft developers have worked hard to establish not only delightful graphics but pleasing music as well. The reason behind this is pretty simple – it is important for every slot to include an appealing soundtrack. It will make gamblers’ time enjoyable here and they will not get bored even when playing for a long time! 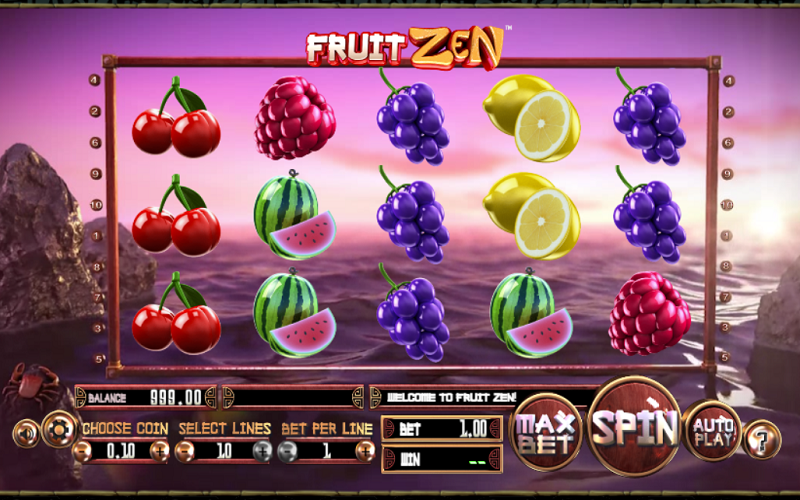 We will provide brief information regarding how to play Fruit Zen here. Every fruit symbol contains a different kind of payout and the biggest icon is an orange that will give you 25x your bet if you catch five of them. Then comes a lemon with 12x payout and the third one is grapes with 6x payout.

First of all, you should choose your bet in the betting area located at the bottom. You have the possibility to gamble with a minimum of 0.02 GBP and a maximum of 100 GBP in this slot. Then you should decide how many lines you want to activate out of 10 and start playing! 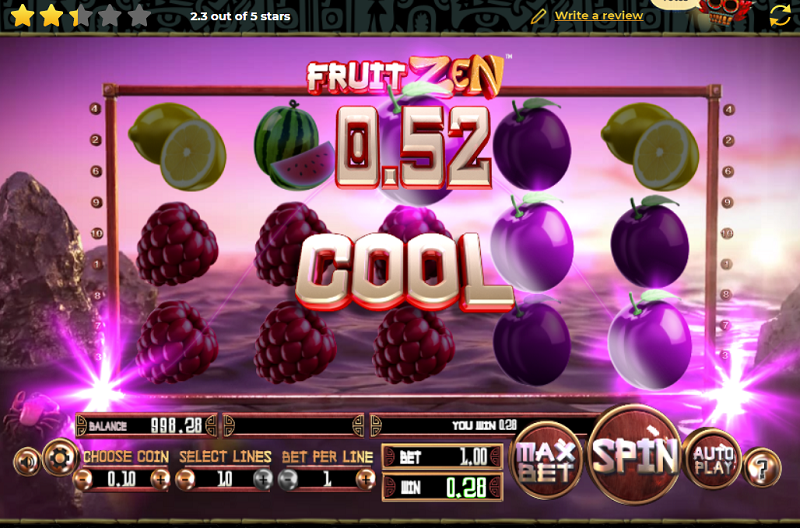 We have to mention that this game does not feature a lot of bonus symbols and the only figure is the logo of Fruit Zen itself. It has the ability to expand and fill the entire reel and substitute all the other icons in order to increase the winnings.

You will receive Fruit Zen free spins with the help of this wild figure, but it can only land on the second, third, and fourth reels, so you need to watch out for them if you want to win a lot of money in this game.

We have created this Fruit Zen guide in order to thoroughly describe all the attributes of a famous slot. It includes an RTP of 95.96% and medium volatility, which will help you to win relatively frequently but not huge amounts. The classic playing area consists of 5 reels and 3 rows with 10 paylines, whereas the minimum possible bet you can place is 0.02 GBP and the maximum includes – 100 GBP. The most appealing characteristic of this slot is definitely the highest payout – 200.000x your initial stake which is an extremely rare opportunity!

Fruit Zen is an upgraded version of a classic fruit slot that was established a long time ago and it was one of the first games ever made. The developers have improved graphics and visuals significantly, and as a result, there is a tremendous engagement of punters in Fruit Zen.