Created in 2014, Platipus is one of the game developers known very well around the world. This is a UK-based company that is currently a leader in terms of developing original, high-quality, and exciting games.

Platipus game provider is known as being a creator for many pioneering HTML5 slots and table games for gambling platforms in different parts of the world. The company, which is largely driven by innovation, is known for its high-quality games and user-oriented attitude.

While Platipus is largely focused on creating slot games, the team behind it has many times shown interest in creating other types of games as well. Platipus is a company created by professionals with years of experience in the gambling industry, which makes its games a great choice for gamblers of all different backgrounds.

The games of Platipus are available in numerous languages, which means that they can be played by gamblers of all different backgrounds and interests. But, there is much more that you should know about Platipus casinos.

Today, we are going to discover the best games offered by the provider and see what makes them unique and different from others. So, follow our review to find out more.

The list of games available at Platipus is truly huge and all of them are very different from one another. Because the portfolio of the company is so diverse and full of so many different types of games, it might be a bit hard to decide which one to play.

Below, you can check out our list of the top 5 Platipus games available for gamblers around the world. So, take a look at our list and find which one fits your needs and preferences best.

Released in 2020, Pirate’s Map has quickly become one of the most popular games created by the company. Used by a lot of gamblers around the world, it is a game that truly takes gamblers on a very interesting and fun journey to make high wins.

This cartoonish 5-reel slot game with a Pirate theme has numerous winning opportunities for gamblers and can be very rewarding for gamers of all different backgrounds. There are numerous special symbols featured in this game, which includes a wild symbol, the Pirate, which can act as a substitute for all of the symbols in the game, except for the Scatter, Money, and Collect symbols.

The wild symbol in the game appears on reels 2, 3, 4, and 5 as a stacked symbol. If you get 3 scatter symbols, which is the Black Skull Flag, you will be able to win 8 free spins, which can be a great help for gamblers to increase their wins. Because of so many opportunities, it is no surprise that Pirate’s Map is one of the best Platipus games in the world. 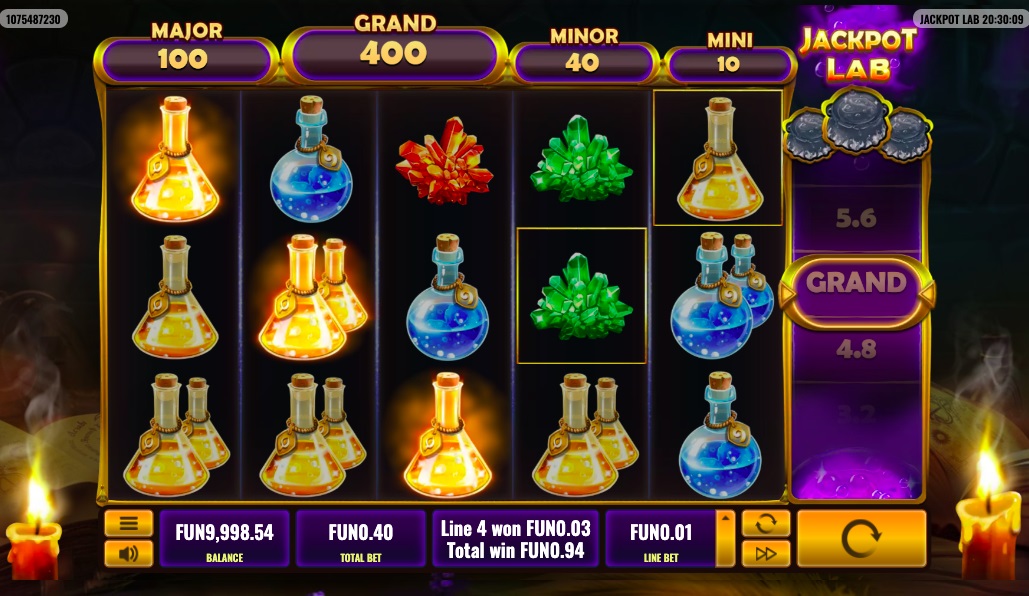 Created in 2019, Jackpot Lab is a game full of opportunities. The game is quite standard, coming in a 5×3 slot board. There are several symbols in the game, such as majors – the bottles, and minors – crystals. There also is another wild symbol in the game. Jackpot Lab also comes with Scatter symbols that can trigger the Free Spins feature as well as special bonus symbols that trigger the Bonus Reel feature with jackpots. The wild symbol in the game is the Blue Wizard and can act as a substitute for all symbols except Scatter and Bonus.

Once you spin 3 bonus symbols, the Bonus Reel feature is activated and it takes you to a special bonus round, full of numerous opportunities. The grand jackpot of the game is 40,000 x bets per line. With 95.2% of Return to Player, this is one of the most popular games on Platipus casinos. 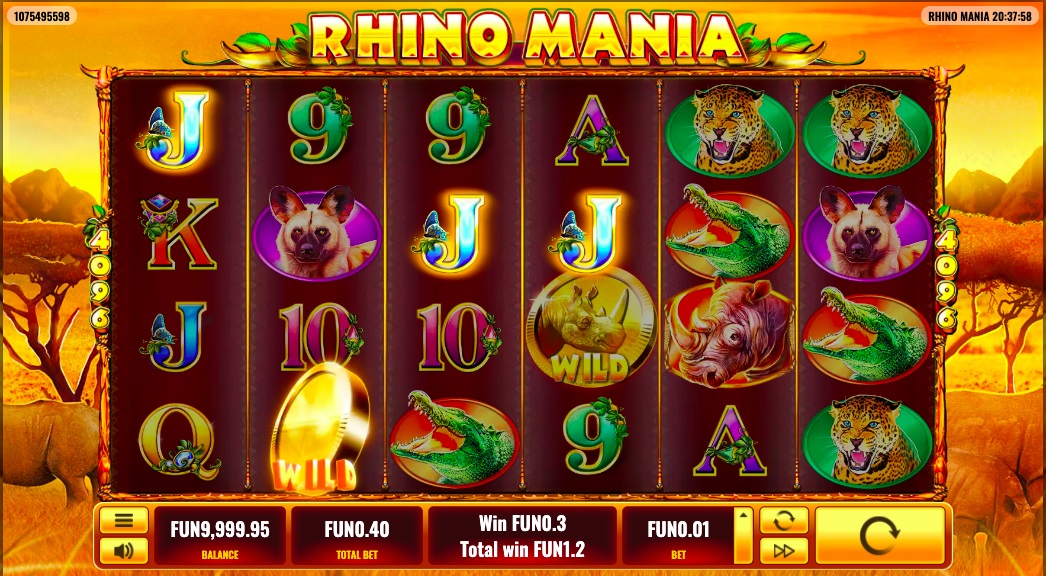 Rhino Mania is an absolute must-play game created by Platipus. The game takes you into the world of the African wild, giving you the opportunity to generate high wins. There are numerous ways to win in this game, and it offers a total of 4049 winning lines.

There is a special wild symbol in the game, the Rhino, which acts as a substitute to all other symbols except for the Scatter symbols. The wilds can appear on 2, 3, 4, and 5 reels only. Once you get 3 or more scatter symbols, you will get yourself a special bonus game, which can give you numerous prizes, such as free spins and additional wins.

Depending on the number of scatters you get, you win different numbers of free spins, from 8 to 50. In the bonus game, the wild symbol will work as a multiplier to further increase your wins. It is one of the most played games at Platipus online casinos. 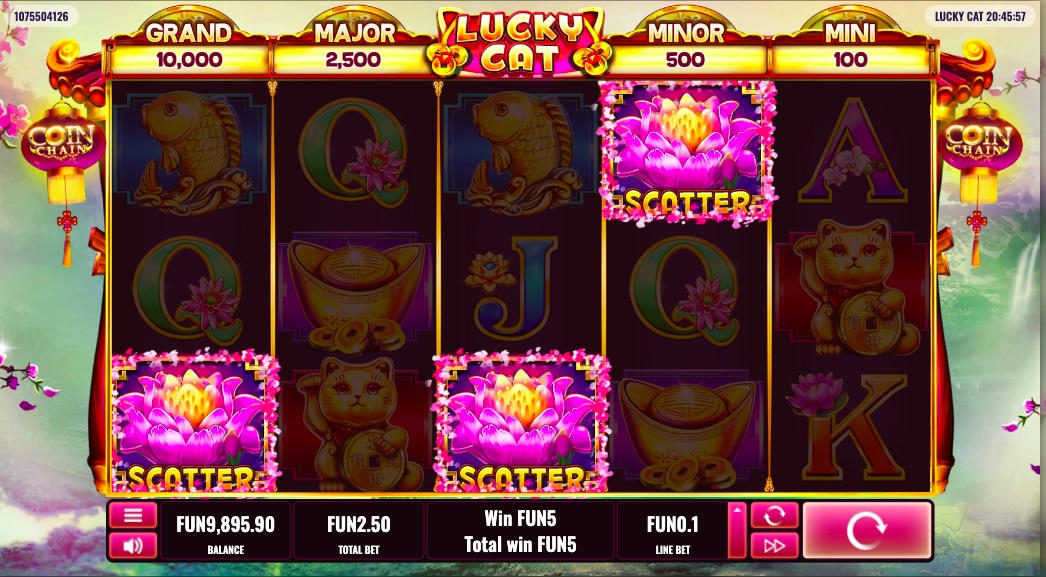 Based on the Lucky Cat symbols, this game is played by thousands of gamblers every single day. This game is your regular 5×3 slot game, with numerous symbols that make the game a lot more fun. It comes with numerous special cards, such as Wild, Scatter, and Bonus symbols. All of these give you special opportunities to win even more money.

The wilds in this game only appear on reels 2-5. If you manage to get the positions filled with bonus symbols, you will win yourself a Grand Jackpot, which is 100,000x bets per line. The game is very colorful and fun, giving gamblers numerous opportunities to win a lot of great and high profits. 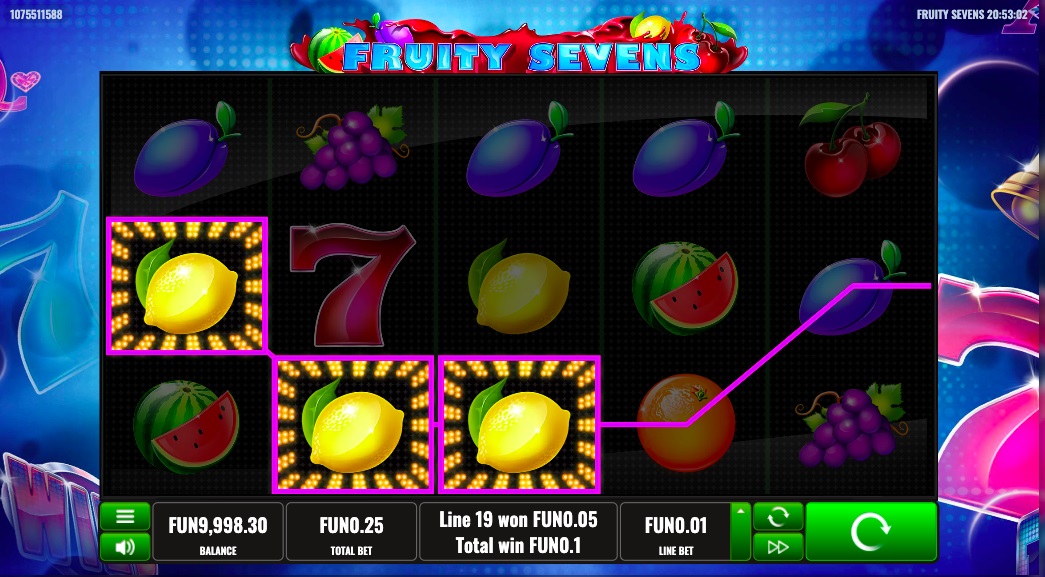 One of the best Platipus slots that you can play right now is Fruity Sevens. It is especially true if you are someone who likes classic and retro slot games. Featuring a fruity theme, this game is something that will remind you of the older online casinos and let you have a gaming experience like no other.

The game comes with beautiful graphics and amazing symbols that are very similar to the older, retro games. It features your regular fruit symbols as well as Sevens and many others. The game can be a lot of fun for gamblers of all different interests and backgrounds.

Almost every single Platipus slot offers gamblers special bonus games. All of these bonus games are created to provide gamblers with additional wins. Bonus games are a great way to increase your wins further and make more money while gambling. The bonus games work differently on different Platipus games.

What Crypto Currencies are available at Platipus crypto slots?

There are numerous cryptocurrencies available at Platipus crypto slots. This includes everything from BTC, LTC, BCH, ETH, and USDT. Thanks to this, gamblers of all different backgrounds and interests can find something that they are looking for at Platipus slot games.

Does Platipus have jackpot slots for Bitcoin?

The company also offers progressive jackpots which are very popular in the market and are a great way to increase your wins.

What are the unique features of Platipus games?

The thing that makes the Platipus games truly unique is how diverse they are. The company has created over 60 games in the past few years and all of these games are known for being very well-developed and high-quality. This makes Platipus games very unique and rewarding for gamblers.